The singer donned a form-fitting bubble gum pink two-piece latex outfit
that gave fans a good look at her awkward wardrobe malfunction. .
Minaj
was totally appalled when she saw the pics of how she looked, but soon
relaxed when she realized the hilarity of the situation. “Nicki is
embarrassed by her major camel toe at the VMAs,” an insider told
HollywoodLife. .
“She had no idea it
would be that obvious until she was under the lights and camera and by
that time it was too late. Her phone was blowing up all night afterward
with friends teasing her. After the embarrassment quickly wore off, she
had a good laugh about the pink outfit which she vowed to never wear
again,” the source added.

Meek Mill still ‘misses’ Nicki Minaj, he wants to make a move when this happens

According to the fast rising spoken words artist, the act is a fallacy and it's misleading! She wrote:

This has been on my mind for a while now. (Family, Repost if you agree) LET'S GET THE TRUTH OUT!

THE COLLABORATION OF GOSPEL AND SECULAR MUSIC ARTISTES
The
reoccurence of gospel artistes collaborating with secular artistes with
the excuse of bringing them into the church. Actually its a Fallacy. A
misleading. Gospel songs are produced for the glorification of the
Kingdom of God. It is a spiritual issue, a weapon God uses to contend
for the hearts and minds of...

The decision by Joint Admissions and
Matriculation Board [JAMB] to drastically reduce the cut off mark of students
seeking University admission continues to generate more reactions from
Nigerians.

Senator Ben Bruce is the latest to react to it and he had some very strong words as he tweeted,

'It is silly for JAMBHQ to say they reduced cut off marks to stop Nigerians going abroad. Only Increased education funding will stop that'.

Strike: ASUU Turns Down Invitation For Talks From FG 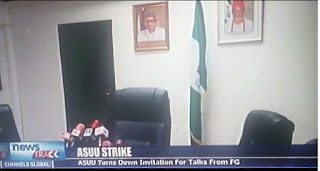 The Academic Staff Union of Universities (ASUU) shun a
meeting with the FG scheduled for today. According to Channels
Television, ASUU President, Biodun Ogunyemi, confirmed that the union
will not attend the meeting.

According
to him, ASUU has met, discussed the new offer from the FG and submitted
a proposal to the government.
He said consequently, the union will only
honour another meeting after receiving a reply to their proposal from
the government.