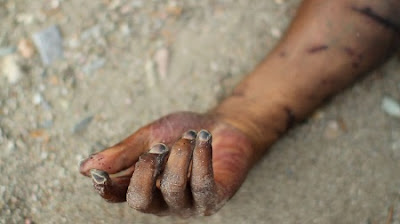 David, aged 23, beat his younger brother, Onu, to death following a minor quarrel that had to do with an errand.

The incident took place at Ubia Amaetiti in Amoso Edda, Afikpo South
Local Government Area of Ebonyi State. It was gathered that their
mother, Mary, had sent the deceased on an errand, but he refused to go.

The furious mother reported him to his elder brother, who then descended
on him and inflicted bodily harm, which led to his death. A source
said: “Last Friday, July 28, a boy called Onu was sent on an errand by
his mother but he refused to go.

Eventually his elder brother, David, returned from a journey same day
and his mother reported him to his elder brother. “His brother started
beating Onu and he fell down. He was rushed to the hospital. The first
hospital declined to handle him.

“They then rushed him to another hospital in Owutu Edda, where he was
admitted. “The following day, being Saturday, the boy died. The family
reported the matter to the Police Station, but the Police directed them
to deposit his remains at the morgue.

“Strangely again, the mortuary department of the General Hospital in
Owutu Edda rejected the corpse, saying they don’t have chemicals for
preserving corpse.

They then took him home for burial, but the Police did not allow them bury him. They later took the body to another mortuary.”

Contacted on phone, the state’s Police Public Relations Officer, DSP Jude Madu, said he would get back to Vanguard as soon as his office was furnished with details of the incident, but had not done so at press time.