FG wants Nnamdi Kanu’s bail revoked
The Nigerian Government has filed an application seeking the revocation of the bail granted to the leader of the Indigenous People of Biafra (IPOB) Nnamdi Kanu.
Sunnews
reports that in a motion on notice brought pursuant to section 169 and
173 (2)(b) of the Administration of Criminal Justice Act (ACJA) 2015,
the Federal Government sought an order of the court revoking the bail
granted the 1st defendant (Kanu) on April 25, 2017.
In addition, the
applicant asked the court for an order directing the arrest and
committing the 1st defendant to custody pending trial.
A top
security official had told PREMIUM TIMES on Thursday night that Mr. Kanu
would be promptly arrested should his bail be revoked by a court.

Buhari approves rail lines from Kano to Daura his hometown

At The Osasu Show Symposium which bothers on the economy and its
effects on the less privileged, Nigeria’s Minister of Transport, Rotimi
Amaechi, disclosed that President Muhammadu Buhari has approved a rail line from Kano to his hometown in Daura.
According
to him, the rail will run from Kano to Jibia local government areas of
Katsina state, while other approved rail lines would run from Port
Harcourt to Maiduguri, Kano to Maiduguri, Makurdi to Jos, Gombe to Yobe
to Borno, Jigawa to Niger Republic.
Cableng reports that Amaechi said;

“General
Electric came here and annouced that they would give us 100
locomotives, we did the audit of our; our narrow gauge can’t carry 17
locomotives, so by October 1st to October 2nd, we would be lauching
about six to ten locomotives, because our narrow gauage cant carry more
than that,” Amaechi said. .
“Government said concession this
narrow guage, and we have successfully done that to the extent that we
are able to sign an agreement with GE. By October GE will take over the
narrow guage and begin to run from Port Harcourt to Maiduguri.
When
they stop at Umuahia, economic activities will be at Umuahia; the
Umuahia station will become an economic hub. We the Ibos in Umuahia will
be able to establish shops and sell goods we would like sell.
That
station from Port Harcourt to Aba, Aba to Umuahia, Umuahia to Enugu,
Enugu to Makurdi, Makurdi to Jos, Jos to Bauchi, Bauchi to Gombe, Gombe
to Borno.” 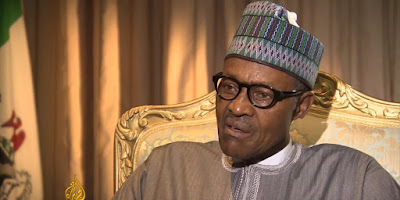 President Buhari has ‘mocked’ the #Resumeorresign London group who held a
vigil in frontof the Abuja House in London demanding he returns home to
start work or resign, saying now that he has returnedhome, he hopes
they will return to. The President said this yesterday while meeting
with State Governors, He said;

“I am very happy with the national prayers that cut across religions and ethnicity; people were praying.

“In fact, some groups in London came and sang the national anthem and
asked that I should go back home. Indeed, I have come back home. I hope
those who went there are not stuck there. (I hope) they will come back
and join us.

“Those that are stuck there with the Brexit, I hope they have weighed
the implications that it won’t affect them, including those that have
property there.

“Those who are not paying tax here; I hope when they sell their property
there, they will bring some of the money here. We need it very badly
here.”

Olusegun Obasanjo says what Nigeria needs now is not restructuring of
the country but that of individual mentality – He claimed he is not in
support of restructuring agitation
The former president however called on Nigerians to understand their
country as he distanced himself from ongoing calls for the country’s
restructuring by some Nigerians home and abroad.

Obasanjo who
made this known on the sidelines of the just concluded African
leadership forum in Johannesburg said Nigerians should restructure their
minds before calling for restructuring of the country.

Electric Cars To Be Introduced Into Nigerian Market By 2018

Nigus Enfinity, an indigenous firm, says it will introduce electric
vehicles into the Nigerian automobile market in 2018 and that its local
assembly plant for electric vehicles will be ready in 2020.

Malik
Ado-Ibrahim, chairman of the company, made this known to journalists in
an interactive session which held in Abuja on Thursday.

Ado-Ibrahim
said several countries across the world have set targets for the ban of
petrol-fuelled vehicles with India targeting 2030, and the United
Kingdom, 2040.

He said Nigeria and Africa need to look inward to
be at the fore of the automotive revolution or risk becoming waste bin
for banned vehicles from other countries.

Ado-Ibrahim, who was
the first African to lead the Formula 1 Team global race car competition
in 1999, said his firm is already building a 100 megawatts (mw) solar
power plant in Katsina and another in Adamawa state.

Just like Ganduje, Fayemi moves to dethrone 16 kings in Ekiti

According to
him, the company has also partnered with Build Your Dreams, a Chinese
firm, to import electric vehicles at affordable costs from 2018.

“We
are also working with BYD to get a local brand and start an electric
vehicle assembly plant for Nigeria from 2020. Gradually we will move to
an EV with the African DNA starting in Nigeria,” he said.

Quit Notice : We Are Leaving, Some Igbos In Bauchi Vow

Some Igbo residents in Bauchi State have reacted to the Coalition of
Northern Groups (CNG)’s withdrawal of the quit notice handed down to the
Igbo living in the North, insisting that they already had their minds
made and would leave the region.

Speaking with Daily Sun in
Bauchi, on Friday, they stressed that they are leaving before the
October 1 quit notice issued to them saying that as far as they are
concern the quit notice still stands.

One of them, IK Iloanya, a businessman, said Thursday’s stance by the northern youth did not appease him to stay back.

Iloanya,
from Agwu Local Government Area of Anambra State, said: “As far as I am
concern, the quit notice still stands. I still stand on the quit
notice. I am ready to forfeit my house and other property to leave
before October 1”

Another Igbo resident, Jerry Ikechukwu, a spare
parts dealer at Bakin Kura, said he has conclude plans to leave
Bauchi and return after a week when he is sure that there would be no
trouble.

Ikechuwku, an indigene of Aniocha Local Government in
Anambra State, said but for prominent northern leaders like the Sultan
of Sokoto

Sa’ad Abubakar and the Emir of Bauchi, Dr Rilwanu
Adamu. who personally came out to say that nothing would happen to
Igbos, he would have left as soon as the notice was issued.

“I
expected President Buhari to say something about the issue in his recent
speech but did not but I am leaving and may return when I am sure the
coast is clear,” Ikechuwku said.

Our
correspondent discovered that a lot of Igbos residents had either sold
or lease their properties, including Hotels, houses and business
premises.

“Almost all the Igbo people in my yard are going,” said Olu, a Bauchi resident.

But others like Vera Udeh, and Chika Onwuka, said they are not leaving Bauchi.

“I
thank them for not asking us to leave again. As for me and my family,
we are staying. When it is time to go, we will go because nobody forced
me to come to Bauchi,” Onwuka said.

Henry Nduagube, a spare parts
dealer, said that there had been tremendous pressure from his kinsmen
in Ezeagu local government of

Enugu State, for him to leave the
north before the October 1 dealine “Thank God for the new development. I
was confident that nothing will happen to us (Igbos). I have made up my
mind that I will not leave the north. I am not going anywhere,” said
Nduagube, who has lived in Bauchi for over 16 years.

Another resident, Vincent Okonkwo, from Nnewi , said he didn’t see any reason why Nigeria should break up.

“I have been in Bauchi for 28 years. I don’t plan to go anywhere because I remain a Nigerian,” Okonkwo, said.

The
Eze Igbo of Bauchi, Igwe Jude Umezika, expressed happiness with the
northern youth for rescinding the October 1 quiet notice.

Umezika
particularly commended the Vice President Yemi Osibanjo, for the way he
handled the situation, saying it calm frayed nerves.

“Any Igbo man thinking of going should drop the idea because the quit notice has been dropped,” he said.

Speaking
with Saturday Sun, the Igwe appealed to religious and traditional
rulers in the north to come together and sue for peace.

“I call on them now that the quit notice has been dropped, to go round and preach peace

He
was optimistic that the role played by the Emir of Bauchi, Alhaji Dr
Rilwanu Adamu and the Governor of the state Barrister Mohammed

The
Igwe said: “I trust the Emir of Bauchi who raised his hands to heaven
that as long as he is alive, his time would witness peace.

“We
also thank Governor Abubakar because he is someone that if you are
aggrieved, when he talks to you, you will feel better and change your
mind about what you planned to do”

Have you seen this message of Olori Wuraola?

The estranged wife of the Ooni of Ife, Oba Adeyeye Enitan Ogunwusi has this to say... 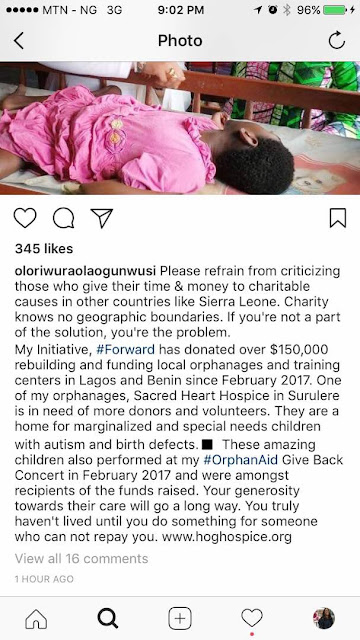