Arraigned billionaire kidnapper Chukwudumeme Onwuamadike, aka Evans, has pleaded guilty to conspiracy and kidnapping before a judge of the Ikeja High Court.

Earlier on Tuesday, a Lagos Division of the
Federal High Court adjourned till September 5 to hear arguments from
Evan’s lawyer and police lawyers on why he should not deliver
judgment on the fundamental rights application brought by Evans.

Photos from the BBNaija Reunion for class 2018

Justice
Abdulaziz Anka had initially fixed Tuesday to deliver judgment on the
suit but a lawyer to the Inspector General of Police and the Nigeria
Police Force, David Igbodo, appearing for the first time since the
hearing began, said he had filed a counter affidavit before the court.
“It will be an injustice for judgment to be delivered without hearing
our own side,” Mr. Igbodo, Commissioner of Police (Legal Section), said.

Later,
when he spoke to journalists outside the courtroom, Mr. Igbodo said
police investigation into the Evans’ case was “almost complete.” “The
case is a very controversial one, it is a sensitive case,” he said. 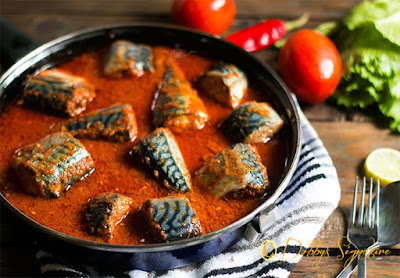 For our newbies, the KFB foodie talk column - handled by Dobby of Dobbysignature -  is basically for ladies and 'guys' that are interested in learning how to cook better  ;).'

I
could probably talk about mackerel a.k.a titus throughout this post but
that would be going overboard. I grew up loving this tasty fish known
locally as "Titus". The beautiful looking vertical stripes on its back
makes it a beautiful sight to look at. As one of the most popular fish
you'd find in the country, it's not unusual to find it in most meals. It
could be smoked, grilled, boiled or fried. Either way, you're sure to
love the...

Billionaire Kidnapper, Evans and his gang members are currently being arraigned in a Lagos court! They are all six, including a female!

According to the Chairman of the National Hajj Commission of Nigeria,
NAHCON, Abdullahi Mohammed, Five Nigerian pilgrims to this year’s hajj
in Makkah, Saudi Arabia, have died.

Mr. Mohammed, who spoke at the 2017 pre-Arafat meeting with Hajj
stakeholders, however, declined to disclosed the identities of the late
pilgrims as well as the circumstances that led to their death.

He said such information could only be disclosed after their families
had been appropriately informed. The NAHCON chair pleaded with the
media to withhold the details so as not to further devastate the
families of the affected pilgrims.