Wife of President Muhammadu Buhari, Aisha, is back in the United Kingdom where her husband is currently on medical vacation. Staff of the Office of the Wife of the President confirmed on Monday that the First Lady left for the UK, on Sunday.
Mrs Buhari had last Thursday returned from London and proceeded to Owerri, the capital of Imo State, where she attended the 2017 August meeting hosted by women in the state.
Some of her staff hinted that there is a possibility that she will return to Nigeria with her husband at a time yet to be officially confirmed.
President Buhari departed for the United Kingdom on May 7 for follow-up consultations with his doctors.
He had assured that he was making progress and would return to Nigeria to resume his duties as soon as his doctors advise.
Sunnewsonline reports
First Lady, Aisha to establish Muhammadu Buhari University

By Tireni Adebayo
Russian billionaire and Chelsea Football Club owner, Roman Abramovich, and his wife of 10 years, Dasha Zhukova, have separated. Abramovich, ranked as No. 139 on Forbes Billionaires List with a reported $9.1 billion, and Dahsa have two children together.
They confirmed their separation in...
Click to Continue Reading
News 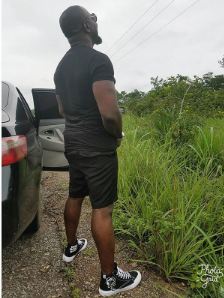 Nollywood Actor, Jim Iyke has apologized for urinating by the roadside. He took to Instagram to make the apology. But is this really an apology letter? Here is what he wrote...
"Ok ok I'd like to apologise to my people for pissing by the roadside. It was due to nature's call beyond my control. I no kill person. I no piss R.Kelly piss. I also wanna assure you if the situation arises again I promise I'll do it all over again without an iota of remorse. Pls accept my TOOL felt apologies. The superhumans that were offended wey no dey piss can piss off.Those that get the inside joke keep pissing, laughing and winning joor. Let me come and be...
Click to Continue Reading
News

Be warned! How man lured and raped a 5-year-old girl

Parents should be weary of who they allow their children to come close and who gives them things. A 5-year-old girl has been raped by a man identified as Emeka. He is known to be a serial rapist and was reported to have been involved in such acts with children. See details below...
Policemen at Ilasa Division in Lagos have arrested a suspected serial rapist identified as Emeka for allegedly defiling a five-year-old girl at Osoyintola area of Ilasamaja.
According to...
Click to Continue Reading