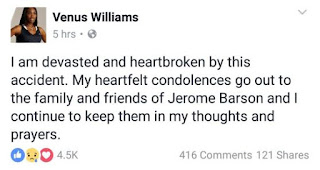 Tennis star, Venus Williams, has finally responded after she was blamed for
causing a car accident that sent a 78-year-old man, Jerome Barson to an
ICU unit where he died 14 days later.
A Police Report indicates that Williams is responsible and she is now being sued by the late man’s estate.

Barson’s wife of 35 years, Linda, was also injured in the accident, and
the lawsuit claims she suffered a cracked sternum, broke her right
wrist, hand and several fingers.