The Board of Continental Broadcasting Services Ltd, owners of Television
Continental, and Radio Continental, on Friday, laid off 145 staff.

A
statement issued by the management of the media outfit said the
decision was part of its effort to restructure the enterprises.
According
to the statement, the restructuring is geared towards repositioning the
business for better and greater delivery of its services to its
audiences and advertisers, NAN reports.
The organisation
explained that in line with the changes, it would reconfigure its
workforce, as part of the rationale to achieve its objectives.

“A total of 145 people are affected by Friday’s announcement,’’ the statement said.

“We
wish to make clear that our core channels consisting of TVC News
Nigeria, TVC Entertainment, and Radio Continental, will now become the
main focus of our business going forward, where we will deliver
high-quality news and entertainment programmes to our audiences and
advertisers across Nigeria and beyond.

“The winding down of TVC News Africa will allow us to concentrate on these key areas of our business,” it added.

The
statement explained that the CBS Board of Directors has also approved a
substantial new investment in its staff across the group of companies
which would enable it to substantially enhance its news and current
affairs output on TVC News, entertainment programming on the market, TVC
general entertainment channel and its key radio asset, Radio
Continental.

“For those staff members affected by today’s
announcement, the Board of CBS Ltd has approved a generous severance
package, in addition to a programme of assistance to enable them to seek
new employment,’’ the statement said.

The media outfit is
reportedly owned by Chief Bola Tinubu, a chieftain of the All
Progressives Congress and former governor of Lagos State.

Officials
of the Nigeria Union of Journalists and the Radio, Television and
Theatre Workers Union of Nigeria could not be reached o the telephone,
as of the time of this report, as calls and text messages to their
mobile lines were not answered.

The site updated their database about the profile of Dammy Krane and his tweets refuting the allegations.
Update below....

After undergoing 17 surgeries on her face, Acid attack survivor marries the love of her life (photos)

An Indian acid-attack victim whose face was severely deformed and
needed 17 surgeries following the attack has finally married the love of
her life.
The life of 26-year-old Lalita Ben Bansi, took a turn for the worse
in 2012, when her cousin threw acid at her over some minor argument and
had to undergo a successful 17 surgeries to partially fix her face. 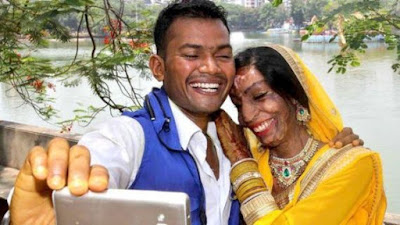 She happily got married to her 27-year-old husband, Ravi Shankar, on Tuesday at the Thane court in Mumbai.
The fairytale between the duo all started with a wrong number.
Lalita met Shankar over...
Click to Continue Reading
News

I have a problem with thieves, fake ass people – Dammykrane’s 2016 tweets

Nigerians sure have no chill! After singer Dammykrane was arrested for grand theft, credit card and identity fraud in Miami USA, Nigerians went to dig out his January 2016 tweets where Dammykrane was allegedly taking a swipe at fellow crooner wizkid, he tweeted that;

He has a problem with thieves and fake ass people. He stated that he always tries to be real. Fast forward to yesterday, he was arrested for theft!
However, Before his arrest, Dammykrane has been flaunting riches on his Instagram page. From Private jet trips, to expensive clothing and food! [Talk of being FAKE]
See the old tweet below...