Memorise: And she shall bring forth a son, and
thou shalt call his name JESUS: for he shall save his people from their sins.
Matthew 1 : 21

Read: Matthew 1:18–21
18 Now the birth of Jesus Christ was on this wise: When as his
mother Mary was espoused to Joseph, before they came together, she was found
with child of the Holy Ghost.
19 Then Joseph her husband, being a just man, and not willing to
make her a public example, was minded to put her away privily.
20 But while he thought on these things, behold, the angel of the Lord
appeared unto him in a dream, saying, Joseph, thou son of David, fear not to
take unto thee Mary thy wife: for that which is conceived in her is of the Holy
Ghost.
21 And she shall bring forth a son, and thou shalt call his name Jesus:
for he shall save his people from their sins.
Bible
in One Year: Joshua 15 – 17
Jeremiah 46:13-28 Hymn: Sing Hymn 11
MESSAGE
Today’s
memory verse clearly states that the reason why Jesus Christ came to this world
was to save His People from sin. Many people fail to realise the horrors of
sin, hence they toy with it. If only they knew how terrible sin is, they would
maintain a great distance from it. Romans 6:23 says the wages of sin is death.
This “death” is not limited to physical death but also extends to every area of
life. Do you know that sin can lead to physical death? Going by the laws of
many countries today, if a man is convicted of killing a fellow human being, he
might have to pay with his own life. In this case, the sin of murder has led to
physical death. Beyond physical death, sin can also bring about material death,
spiritual death and more. Do you know that for failing to comply with the
divine commandment on tithes and offering, some people who once enjoyed a boom
in business have had to face dryness of the worst kind-almost to the point of
begging for food? This is how sin can bring about material and financial death.
It can also attract emotional death. A man or woman cheating on his or her
spouse will bring about emotional death in that relationship. In any way
attracted death to yourself, may the mercy of God intercept judgement and turn
its sword away from you in Jesus’ Name!
As
far as God is concerned, there is only one penalty for sin and this is death
(Ezekiel is 18: 20). It is important to note here that this death is separation
from God. If you were brought before the judgement throne of God, accused of
just one act of sin, you would not be made to face a sentence for every size of
sin is the same – death. Today, we categorize sin according to our
understanding. We call some sins “High Crimes” while some others are seen as
harmless. However, whether a sin is so light and so “innocent” that everyone
approves of it does not matter to God. All sins fall short of His standard and
are all punishable by death. We are created to live our lives fully connected
to God, but when sin comes in, it separates us from our only Source and
Sustainer. If the blood of Jesus is not applied to wash away a person’s sin,
the drift from God continues until physical death occurs and the fellow is
forever banished to Hell. In what way is your sinful lifestyle bringing death
upon you today? Rise up and run to the cross of Jesus Christ, asking for
forgiveness of sins and cleansing by His Blood. Invite Him to come into your
heart, and thereafter keep a great distance from sin.
Prayer Point: Father,
in Your mercy, reverse every form of death I have brought upon myself.
Open Heavens Daily Devotional guide was written by Pastor E.A.
Adeboye, the General Overseer of the Redeemed Christian Church of God,
one of the largest evangelical church in the world and also the
President of Christ the Redeemer’s Ministries.
Toke Makinwa to share 2face Idibia with Annie if she doesn't find a husband soon

America’s Got Talent contestant Kechi Okwuchi is an inspiration

America’s Got Talent contestant Kechi Okwuchi is an inspiration. . . Kechi survived the 2005 Sosoliso Airlines plane crash in Nigeria that took the lives of over 100 persons on board. She is one of the two survivors. . . After such a harrowing experience, music became her escape as she lay on her...

Amidst all the controversies surrounding Senator Dino Melaye, this morning he shared a letter of confidence by his state APC.
The
letter partly reads,...
Click to Continue Reading
News

Nigerian man buys his girlfriend a 15million Benz, just to say “thank you for loving me” (video) 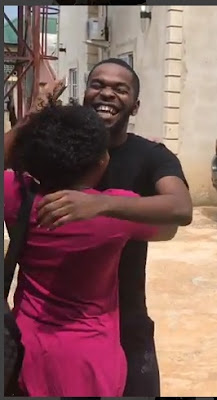 A Nigerian man has bought a 15 million naira Benz for his girlfriend of four years! Not to ask for her hands in marriage but just to tell her, "thank you for loving me"!

Wow! isn't it lovely??/ He shared the video online and wrote:

Life is like a journey but my journey couldn't have been
more sweeter without you, this is not an engagement nor marriage but
this is just a way to tell you thank you for always loving me since 2013
even tho your friends told you to leave the little boy with nothing
back in the days at Delta state university but you believed in me, I
just wanna say thank you with this 15...