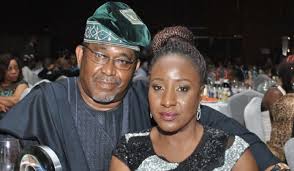 They had a marriage that was quite enviable—husband and wife in the same profession and having it good.

Iretiola, who married the renowned actor/TV personality, Patrick
Doyle, shortly after his wife died 15 years ago, wasn’t as popular then.

How did she meet him?

“I met him at my first official audition in Lagos State because I
had done a production in Jos, Plateau State, before then. School was
shut for a very long time. I was bored, I told a friend this is what I
wanted to do and she said ‘I have somebody who can help, let us go to
him’. We went and he said there was an audition the following week. He
asked me to come and try if I could get the role. I was auditioned, got
the job and we started working together. Marriage came later,” she said
in an interview with Kemi Ashefon three years ago.

The marriage which clocked 15 years in 2017 was rid of scandals.

But the recent news of their separation has once again brought certain issues about celebrity marriages, to the front burner.

Could it be that Ireti, who is now more attractive, exposed and
celebrated more than ever as a result of her performances and
appearances in box off movies—‘Fifty,’ ‘Wedding Party,’
‘Arbitration’—bowed to pressure?

Could it be that the estranged husband, Patrick Doyle became less
attractive to Ireti, who, obviously was living up to the billing as a
super star actress? Her looks and wardrobe had experienced numerous
overhauls in the last four years.

She would always describe Patrick Doyle as a gentleman, who is “easy-going and pretty laid back.”

She also said of him, “He’s a family man who when not out working is
likely to be found in his room watching TV, reading or engaged in some
intellectual discourse with his kids. He has a keen mind and is very
good at what he does.”

But many became curious when Patrick posted this message to his wife on her 49th birthday in 2016.

“TRIBUTE TO AN AMAZING LADY
On the eve of our 15th wedding anniversary I issued a post titled “ODE
TO A GREAT LADY”. Today at a few minutes past midnight on the 3rd of May
2016, the woman who I described then as the “Angel Of MyLife” will be
49 years old, one year short of her golden jubilee age in this life. As I
look at her as she sleeps right now, I see a strong African Princess
who has more than acquitted her self as a mother, wife, daughter,
sister, friend and compatriot.

Iretiola Olusola Anike Doyle, daughter of Osatuyi from Akure, I salute
your resilience, courage and dedication. I declare that your labor of
love shall not be in vain, in Jesus name. Even angels can become weary,
when you consider the extra burden of life and making a living in the
jungle that Nigeria has become, but not once have you hinted at being
tired. Instead you have doubled down and made sacrifice after sacrifice
for the collective.

I would be remiss if I fail to acknowledge your commitment to uplifting ”
The Doyle Clan” in practically every way. My earnest desire is for you
to be rewarded abundantly before your 50th birthday. Even in the face of
the present challenges, you have remained steadfast. I am not unmindful
that between me, the children and the state of things in Nigeria you
ought to be weary, so I am inviting help from Zion to further strengthen
you in this last lap of your labor of love.

I call on all friends of “The Doyle Clan ” wherever they may be to join
me in wishing “The Angel Of My Life” strength from on high on this
occasion of her 49th birthday. Iretiola me ma fi.” (sic)

Or she got tired of bearing too much burdens?

So many questions but one thing is clear—theirs was a separation never expected in Nollywood. Never.

Have you seen this selfie of Oshiomole, his wife and filmmaker, Elvis Chuks?
Amara, wife of Kanu Nwankwo, celebrates their 13th traditional wedding anniversary (Photo)
To Top