The Saturday, June 10, 2017, wedding of Folarin Alakija and Nazanin
Jafarian Ghaissarifa in the United Kingdom broke all records with a N2.3
billion bill at one of the world’s most well-appointed venues within
all the trappings of a grand fiesta.From decor to food and drinks,
entertainment to galaxy of guests, Nigeria’s richest woman raised the
bar beyond spectacular.

1. Folarin Alakija and Nazanin Jafarian Ghaissarifa were introduced by friends in London and he proposed in October 2016.
A lavish traditional engagement was hosted in November 2016 at the
Grand Ballroom of Oriental Hotel in Victoria Island attended by the
wife of the President, Hajia Aisha Buhari.
2. One million roses and white orchids (at £200,000) adorned the
venue (planned and executed by the decorator to the Kardashians, Jeff
Leatham who brought about 30 staffers to the United Kingdom to work on
the project).
£10,000 8-tier cake decorated with a hundred ornate white roses and
doves (by Elizabeth’s Cake Emporium which attends to the cream of high
society in Europe and the Middle East).
3. A spectacular fire work display in the grounds of the venue was a
fitting finale to a jaw dropping nuptials which breaks all records of
glamour and extravagance.
4. The Iranian bride studied Bioengineering and Biomedical
Engineering at Manchester University. The marketing consultant beauty
and model who once dated Rob Kardashian (in 2013) also has a Diploma in
Law.
Born in Iran (to Khosro and Nooshin Ghaissarifa), she has lived in
Los Angeles (United States of America), London and Manchester (in the
United Kingdom).
5. Folarin, who studied Geography at Imperial College in London, is a businessman who loves cinematography and savvy investor.
His parents, Mr and Mrs Modupe and Folorunsho Alakija are worth $1.7 billion with their FAMFA Oil business.
Finicky about the best things in life, the second richest African
woman (after Angola’s Isabel dos Santos with $3.3 billion net worth)
has two private jets, two flats in Knightsbridge and a mansion in Ikoyi
(Lagos) among other objects of desire across the world.
6. The first wife of one of the four sons of the Alakijas (mother of his daughter) died of cancer about 6 years ago.
7. £5 million (N2.3 billion at N460 exchange rate) was reportedly
splashed on the nuptials with event planner Sade Awe of The Bridal
Circle whose painstaking attention to details wins her elite clientele.
8. The venue of the ceremony, Blenheim Palace in Oxfordshire ( the
United Kingdom), was hired for £150,000, and an extra £200,000 for
marquee and marble etched with the couple’s initials in gold.
The decoration required a week of exclusive hire of the venue.
9. A five-course meal had guests lapping up deliciously decadent meals
of barley wafers with cheddar and chive yoghurt dip, crispy duck egg and
Wiltshire truffle, foie gras, beef and sole, guinea fowl, edible
flowers and pink champagne granita and more…
10. The A-list guests included Shanina Shaikh (a Victoria Secrets’
angel), actress Rio Fredrika, fashion designer Becka Indigo, Alhaji
Aliko Dangote, Mrs. Toyin Saraki (wife of Senate President Bukola
Saraki), Onikepo Braithwaite, daughter of billionaire mogul Femi
Otedola (Temi, who’s a fashion blogger), politicians and moguls as well
as socialites from Nigeria and the United Kingdom.
11. Hundreds of guests from Nigeria were flown in and lodged in plush hotels.
12. Pop star Robin Thicke (of Blurred Lines’ fame) performed at a price
put at £150,000. He was flown in from the United States of America.

What the Alakijas spent N2.3 billion on as son weds Iranian beauty

The magical nuptials of Folarin Alakija and Nazanin Jafarian
Ghaissarifa in Oxfordshire (England) at the weekend set a new benchmark
as £5 million (N2.3 billion) was lavished on the ceremony.From the
well-appointed venue to the special marquee, roses and orchids to gifts
for guests (some flown from Nigeria and lodged in hotels), the nuptials
was a statement in extravagance.

Here are some of the items that set the families of the groom (with
Nigeria’s richest woman as matriarch) and the bride’s (Khosro and
Nooshin Ghaissarifa) by N2.3 billion:
1. One million roses and white orchids at £200,000 (N92 million).

Jeff Leatham who decorates for the Kardashians brought in about 30 staffers to work on the project.
2. 8-tier cake with hundreds ornate white roses and doves at £10,000...

Mr Eazi defends his bae, Temi Otedola after she is accused of bleaching 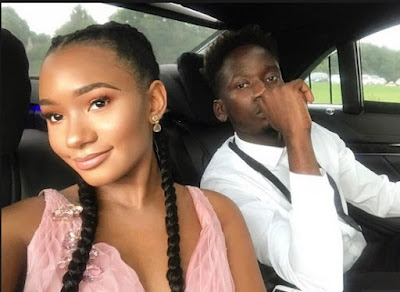 Ghanian Singer, Mr Eazi has defended his girlfriend, Temi Otedola after she
shared the photo below on Twitter and people claimed she bleached
because of her dark knuckles.

The two are rumored to be dating though they are yet to confirm the news. 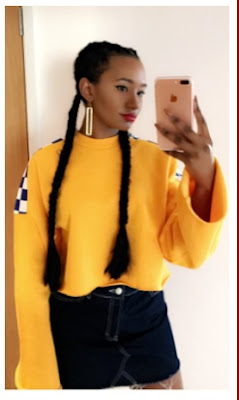 And the follower trolled: 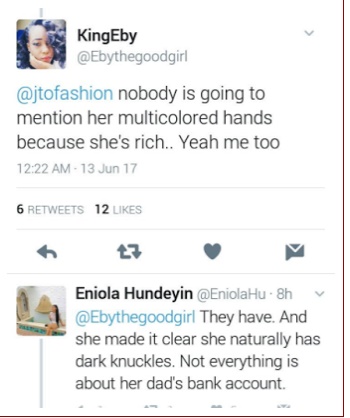 And Mr Eazi stepped in to defend his bae: 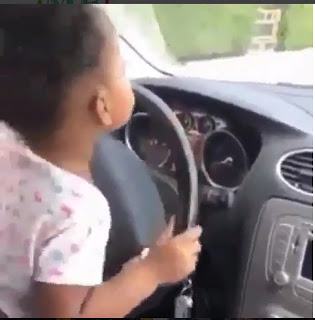 Wow! A 3 years old girl is seen driving her father's car like a professional with the father just telling her what to do!

In the footage, the girl is seen sitting on the lap of  her father while she controls the steering professionally and even avoided on coming vehicles!
Hit play below....

Can you try this with your 3 years old child?