For the Newbies, the KFB movie review is an every Friday column that
gives you a cinema guide on which movies to watch and not watch! You can
check out our other reviews

Today’s Movie for review is Desecration.

I almost cried after seeing this movie because I was angry, disappointed that I wasted a substantial amount money and my precious time at the cinema.

Synopsis: This story of enthrallment and
obsession explores how a chance meeting and a casual encounter quickly
becomes a living nightmare for Olusola Daniels (Joseph Benjamin), a
brilliant medical doctor and his young family. Following a romantic
weekend with the gorgeous Linda Bruce (Rita Dominic) Olushola assumes he
can just walk away.

Set in London, UK, this 2017 directed by Niyi Towolawi
tells the story of a Nigerian Doctor, Sola Daniels, his wife Adesua,
who is a legal practitioner, and his mistress, Linda, who is a
professional pest. Adesua travels with their nine-year-old for one
weekend, and Sola gets together with Linda who becomes obsessed with
him. She demands that they continue the affair even after his family
returns, and while he is reluctant, she doesn’t let up until she gets
pregnant. Then she goes full throttle on her quest to ruin his home.

Everything…characters, acting, story line ….everything was so boring. Joseph and
Rita are perhaps the most outstanding as expected from their wealth of
experience, but even their showing is not one of their bests.

Desecration is
extremely slow, and the film has no climax whatsoever. It starts
leisurely and ends un-interestingly.

It had no inspiration, no soul and had so many errors too.

Imagine Joseph Benjamin waking up after sex with all his clothes on,
including his belt while the woman beside him is naked. It is confirmed
that they had sex; who dressed him up while they both were asleep?

The only thing praiseworthy about Desecration was the fine picture quality and choice of location.

Everything else as rubbish.

The good guys at cinema movie pointer already described it as “Uninspiring. Sorely predictable. Just watchable. Expect nothing special.
‘Desecration’ is a depressing melancholic made for TV drama. Lukewarm
at its best. Tortuously boring at its worst. And the “worst” is twice as
much as the best. Do the math.” but I went on to watch cos I was a die hard fan of Rita Dominic and oh boy, I regret it.

See trailer and get more details below: 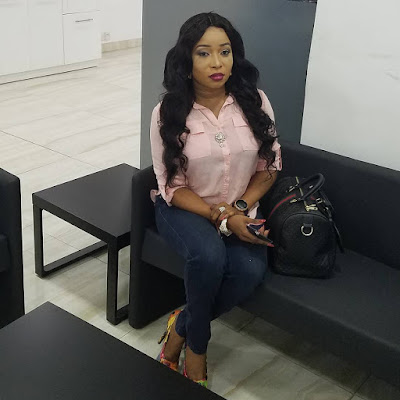 The acclaimed business mogul took to her Instagram to blast such people saying they need MFM deliverance. She also went further to state that we are all animals, saying she stands for peace.
What she wrote:

If
you are above 30 and you are still single and haven't taste marriage
before and you are taking side in Marital issues, my dear you need MFM
deliverance.
Do you pray for your Uncle/Brother/Father
to spend all his life in prison bcos of  Marital issues or will you pray
for your sister/mother to die in the hand of any man???.....

After the bitter divorce from actress Anne Njemanze, many wondered who the next woman would be.

Nollywood actor, Segun Arinze’s marriage to Anne Njemanze a.k.a
Domitilla, crashed like a pack of badly stacked cards. Not only that, it
was fraught with scandals.

He met Oguta-born Julia afterwards and the marriage has surprisingly stood the test of time.

Really, a lot of fans and colleagues never gave it a thought that his marriage would last.

Why? They thought Segun was violent as alleged by Anne.

When men were boys!.. Offiong Edeth Anthony aka Thin Tall Tony who hails from Cross River state is a hottie for days! The 36 years old multi-talented father of three shared the throwback photo of when he was in Ajegunle.

He shared the photo and wrote:

This is my #tbt ...life in Aj city #ajegunle and Ktown #kirikiritown...
My childhood was pretty much amazing. Thank you to everyone who has made
me the man I am today. #thintalltony #madlove #madeinnigeria
#changebeginswithme #proudlynigerian #whatscrackerlacking