Serious crisis has engulfed the Great Overcomers Ministry Church in
Abaranje, Ikotun, a Lagos suburb over an allegation of adultery and rape
levied against one of the church pastors.

P M.EXPRESS gathered that the alleged sex scandal has put the entire
congregation in disarray as some members have left in annoyance because
the church’s General Overseer, a female was in the thick of the whole
scandal.

It was gathered that a former assistant pastor in the church,
Okwudili Ozor was accused of allegedly sleeping both with the General
Overseer, Prophetess Gloria Udeh and her 15-year old daughter, an act
which has landed him in prison.

Trouble started when Prophetess Udeh accused Ozor of forcefully having carnal knowledge of her teenage daughter in January.

She reported the matter to the Police at Area M Command in Idimu,
Lagos who arrested and detained for nine days before he was taken to
court but luckily, the court did not sit on that day.
He was later released by the Police.

But in a twist, a team of Policemen from Idimu Police Station early
Tuesday morning invaded Ozor’s house in Ikotun, Lagos, arrested and
charged him before Ogba Magistrates’ Court for raping Gloria’s 15-year
old daughter.

The Court’s Chief Magistrate, Mrs Davis Abegunde granted him bail but
remanded in prison custody pending when he will perfect his bail
condition.

But this latest arrest and the remand of Ozor has led to the opening of a can of worms.

The suspect denied ever sleeping with the teenage girl as alleged by
the Prophetess, but instead he admitted he has had affairs with the
woman who felt heartbroken that he dumped her for another woman.

According to him, the woman has been married for some years and had four children before she separated from her husband.
He said when he joined her church; the prophetess made him her
assistant and asked him to marry her so that they can build the church
together.

Ozor said he declined the proposal but told her he already had a
woman in his village he wanted to marry and this did not go down well
with her.
“She tried to pressure me to change my marriage plans but I refused. I
later went ahead to marry my wife in 2015 and that’s when the trouble
started,” he said.

The suspect claimed that after he was arrested in January but later
released, the prophetess demanded that he should pay her N500,000 before
she would withdraw the matter from the police.

He said he pleaded that he had no such amount to give her and she
reduced it to N200,000, yet he could not raise the money and that’s when
she decided to use her influences to deal with him.

When P.M.EXPRESS contacted Prophetess Gloria, she denied the claim that she was sleeping with Ozor.

According to her, the case she reported to the police was that of sexual assault on her daughter.

She claimed Ozor and his relations have been pleading for her to forgive him which she gave him condition which he had accepted.

Gloria said he was only angry with Udeh, who he accused of denting
her image and that of her church following his allegations that they
were sleeping together which had made some members to leave the church.

On why it took her two years before she reported the sexual assault
matter to the police, she declined to speak further and walked away.

When our correspondent visited the Command to speak with the Area Commander, he was not around.

However, police source confirmed the incident and declined to make further comment on the matter. 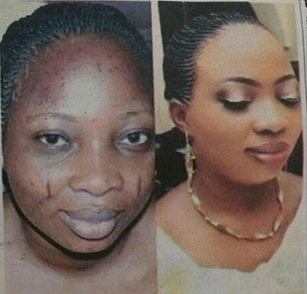 This woman pictured above has been divorced by her husband. He dumped her during their honeymoon just a few days after their wedding when he saw her without make up for the first time.
Reports say the groom had taken his 35 year old bride to Richards Bay for their honeymoon, but the outing turned tragic when her face became wet and her makeup washed away during a swimming session.

The 40 year old groom, Molapo, who could hardly recognize his wife immediately got angry, stormed out and filed for a divorce.

"I have never seen her like that, i was shocked. She has been deceiving me all along with her cosmetics and fake eyelashes. If she can deceive me like this, who knows what more she can do...