I have to admit that truly the best things in life don’t sometimes come in the best package and this movie proved that.

I wasn’t going to watch it cos i felt it wasn’t up to standard, it wasn’t well advertised and it didn’t feature the A-list cast of Nollywood…thank God for my sis, she insisted on having us see it on Iroko TV and oh boy, it turned out to be an awesome movie!

A
mute make up artist whose sole means of communication is through the
written word becomes close to the son of one of her best clients,
however there is an obstacle stopping her from fully allowing him into
her world.

You see, Ovy’s Voice is a simple yet very sweet watch that captivates you in a
‘bed of roses’ kind of way and then proceeds to wreak havoc on your
emotions when you least expect it.

The writer manages to make a romance that is
sweet and endearing, takes you along the journey, and is still not
dragged out or too rushed. There are points where you kind of know where
the storyline is and the writer and director give you space to embrace
it, and even though you knew it was going to happen it still feels new.

Movie Review: Mount Zion's 'The Train' based on Mike Bamiloye's true life story will bring out all your emotions

For the most part of the movie she is just writing on
boards and shrugging her shoulders. However, in the one scene at the
hour mark where things change between her and Anaan,  she manages to depict a world of emotions without ever saying a word.

Then there’s Shaffy Bello as Mama G who manages to embody the
mother-in-law you wish you had, and Uche Obodo who apparently has
learned how to tone it down much to all of our gratitude. Then there’s
Mofe Duncan for the girls dem. Handome guy!

Then there’s the story itself. Just when you think you have it pegged
for a certain type of film and you know where it’s going it flips the
switch and becomes more. It’s originality is not from being so “brand
new” of a storyline but from flipping the storyline at a time when the
audience least expected it and pulling it off brilliantly.

And then there’s the music, anyone else catch that male rendition of Di’Ja’s “Awww” in the middle there? From the jump the movie hits you with the music and it’s above par.

Ovy’s Voice has a great weapon, and it is not because it keeps us
eager by having a mute central figure, it is because there is a lot to
this central figure. The story does not end up as a love story, it is an
abuse story.

Because of Ovy’s behavior from the first scene, we assume
that she has been mute from birth but we soon realize, that her
condition was the aftermath of the constant sexual abuse she received
from her from her father. From the age of 12, her father starts abusing
her sexually and her mother feels shadowed by societal analysis and so
she keeps quiet about it. She does not protect her daughter; neither
does she confront the man.

The acting is great! Shaffy Bello is not the usual swift talking
high-class woman in “Ovy’s Voice”. She takes on a completely different
role, as a full Yoruba persona with an interesting accent to back it up.

Her time on screen is limited but she does a memorable job. Bisola
Aiyeola also does a job worth commending, as the mute Ovy she is swift
and her action throughout the film is the reason we stay hooked.

Ovy’s voice is not a fast-paced film, it slowly makes its point and
even though it takes too long to do this, there is a lesson to learn
from the production, at least if not for anything, for the exposure of
one of the many effects of child abuse.

Sad! This woman died immediately she got to Uyo from Lagos 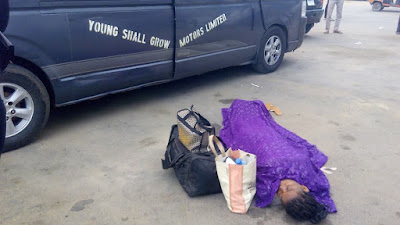 A woman simply identified as Felicia died immediately she got to Uyo From Lagos.

Apparently, it was revealed that her husband took her to Lagos park
alive to board a vehicle going to Uyo.. and then made arrangements with a

Sad! This woman died immediately she got to Uyo from Lagos
How Actress Mercy Aigbe’s Marriage crashed after alleged domestic violence (See Photos)
To Top