A fun-loving musician turned evangelist (who now ministers from God’s
word) Ebenezar Obey, in an interview revealed why he finds it difficult
to marry another woman since he lost his wife.

He said, “Because my wife was loyal and wonderful to me, she made my
profession very easy, she did not trouble me in anyway and that is why I
have refused to marry since her death. Anytime I sit down in my palour,
I see her picture because it is positioned right in front of my chair.
She did not live to see my 70th birthday. So I opened a town hall in her
honour on her birthday on March 23. On the same date this year, I built
a police post in her honour.”

If everyone likes you, then you’re close to your grave - Bobrisky

Recalling how he met the mother of six of his children including
Oluwashina, Oluwarotimi, Oluwabukola, Toluwalase, Pastor Olanrewaju, and
Reverend Folarin Obey, Obey said,
“I met my wife when I was struggling. Her parents actually told her not
to marry me. I was still a young musician then. I met her in her
brother’s place because her elder brother was my friend. When I met her,
we greeted and that is how we started.”

Still on his wife, the former Baba Miliki said, “God gave her to me.
And if God gave you a thing, you will have much to say about that thing.
I know everything about Olaide. She was the pillar of my success. I
think she deserves a full musical album to her appraisal. I met her
through one of her brothers, Vasco Ola. We were both tenants at Mushin,
Lagos where I was living then. Thereafter, I toasted her and sooner we
got married in 1963. I loved her so much as a beggar would crave money.
The following year, precisely on March 9, 1964, she had her first child,
Oluwashina. My wife hailed from the Olufade family in Ibara, Abeokuta. I
was open to her. She was also open to me. With her, I didn’t have any
secret, I told her everything. And whenever I did something wrong, I
would come to her and confess, and also apologise. So, she knew me as an
honest husband.

Why I still flaunt my hairy chest at 60 - Harry B

“Olaide was very supportive, understanding, loving, passionate,
caring, and enterprising. She stood by me when there were travails and
turbulence. Right from the time I lived in one room apartment in Mushin,
she had stayed firm with me. She knew everything about me. I used to
see her as my mother.

“My wife understood my body language and gestures a lot. If I looked
at her eyes, she would know what I wanted her to do. She cooked my food.
And I don’t eat food cooked by someone else. If she didn’t cook, I
would prefer to remain hungry. Anyway, I have a habit of not eating at
shows or any other place I go to. And if I went on a journey and didn’t
have the opportunity of eating her food, I would prefer taking snacks
and anticipating my returning home to eat from her pot.”

'She used to be the mumu, now I am' - Actor, Bolanle Ninalowo reveals the unknown about his wife

“Every musician needs a peaceful and serene environment so as to
meditate well and give room for inspiration to flow. Creating a peaceful
atmosphere is necessary for good performance by a musical artiste. Lack
of this often results into failure of many artistes in the music
industry. For most musicians, their wives always create commotion and
disorderliness in their homes. But in the case of my wife, she gave room
for quietness which had always enabled me to compose meaningful and
valuable songs. Marrying her had enhanced my music business so much.” 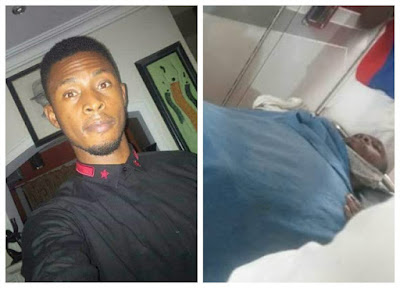 
One of them, a Batch A Stream 1 corp member, Abraham popularly called
Ab,  fainted during a football match, was rushed to a hospital where he
lost his life after the medical doctor on duty allegedly refused to
attend to him.

According to Facebook user, Comr Dokubo, the corp members had gathered
yesterday at the Government Technical College (GTC) field for the
ongoing football tournament which was played by Corp members serving in
Abak.

Not up to ten minutes in the first half, a Batch A Stream 1 corp...