The unfortunate story as shared online…
Rukayya, a 4
year old girl from Zaria fell sick and was taken to a Hospital in Zaria.
(I am withholding the name of the hospital for some reasons). After
running some preliminary laboratory tests, Rukayya’s parents were told
their daughter was a sickler,that she has malaria.They treated her,and
they left for home.

When Rukayya’s condition didn’t improve, her
parents took her back to the hospital &was admitted immediately. She
was transfused with blood through a vein in her leg, because according
to them, they could not find any in her hands.

After the
transfusion, she was discharged to go home. Later on, the leg became
swollen and Rukkaya had to be taken back to the hospital. Rukkaya’s
parents were told to take her back home, elevate her legs and administer
ice therapy.

When that didn’t work, Rukayya
was taken back to the hospital again where the parents met the hostility
of the staff on duty. But they were eventually attended to; they
examined the affected leg. and when they realized they could not handle
the case anymore, they were referred to ABU Teaching Hospital
Shika-Zaria.

On getting to A.B.U.T.H, Rukkaya was immediately
taken to the emergency room and the doctors after examination told her
parents that Rukayya’s leg needs to be amputated immediately due to the
infection that is spreading in her leg.

Further tests carried out at Shika revealed Rukayya was not even a
sickler,and the peripheral Hospital misdiagnosed her from the start.
GIWAC has filed a petition on behalf of Rukkaya to the Executive
Governor of Kaduna State, Commissioner of police, Speaker state house of
assembly, members representing her constituency (Basawa constituency)
in the state assembly and chairman of her local government (Sabon gari).

He got married to former Ms Omotayo Sanusi on October 9, 2016.
For actor and Special Adviser to the Kwara State governor on Arts and Culture, Femi Adebayo, marital life has been blissful.

For one who was divorced seven years before he remarried, he said his
greatest joy is having a partner who understands his life and career as
an actor.

Femi said, “When it comes to marriage, it is important to be with someone who understands you and accepts you totally.
My first wife was uncomfortable with my profession as an actor, but that
is what I love doing. Acting gives me joy and I will continue doing it
as long as I can.

My marriage was based on gross lies, deceit, scam and many more darkness – Tonto Dikeh reveals how many STDs she treated

While replying one of her followers who
asked her not to allow people laugh at her over her failed marriage,
actress Tonto Dikeh disclosed that her marriage to Olakunle Oladunni
Churchill was based on gross lies/deceit, scam and many more darkness.

She also said she treated so many STDs. 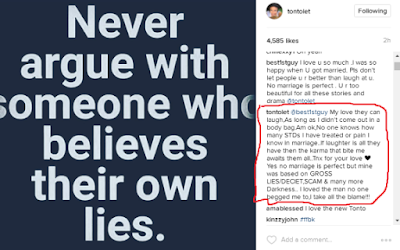