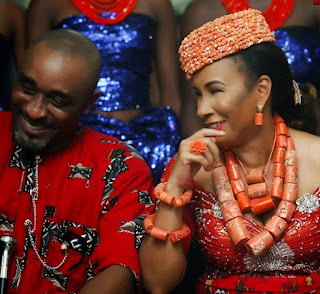 Embattled
Nigerian actress, Ibinabo Fiberesima, has confirmed that her two-year-old
marriage to Uche Egbuka has crashed. She relayed the message in her birthday
shout-out on Instagram.

She wrote
on her harrowing experiences:

“From the shock of a 3 time presence of lumps in
the breast to surgeries fighting for my life and the pain of dissolution of a
bond I hoped to keep with a life time partner and the re-emergence of
singleness. From the tension of awaiting a judge’s pronouncement to the horror
of walking into prison over a cross accidentally acquired and carried for so
long.” (sic)

But real
reasons have emerged on why the marriage crash before it celebrated a year
anniversary—it was a contract marriage!

First, the
wedding was a fluke. Maybe to obtain a suitable social standing after the
scandal of her affair with Fred Amata and other men she had three children for,
Ibinabo, a graduate of English from the University of Ibadan, opted for
marriage.

Ibinabo
and Uche tied the knot at an elaborate ceremony in December 2014.

Meanwhile,
in August 2015, a woman based in Augusta, Georgia United States of America
abroad had granted an interview to NaijaGists.com
that a Nigerian guy was putting pressure on her for marriage. According to the
woman, she said the man, Uche Egbuka, condemned his marriage to Ibinabo and
never loved his wife.

“This is
so crazy. I just met this man a month ago, he tells me he is married to someone
in Africa, I googled his name and he is married to an actress, He tells me that
they married for social purposes that they don’t love each other; that they are
just friends, that it’s all fake! Wow!

She is not
done. She further said, “He calls my phone everyday! He lives in Augusta GA,
looking for women because he says his wife lives Africa and he lives in the
U.S. I would never have to worry about her! This man is crazy! He needs to go
be with his wife instead of out preying on women!”

Ibinabo,
who is now in her late 40s(not 43 as written by bloggers)denied the story as
fake, claimed to adore her husband and quoted all things on love but, sources
close to her then said Uche Egbuka had left her in the cold!

Now, she
has confirmed that her marriage is over.

If my daughter wants to marry an old man, I’d allow her — Shade Okoya

Have you heard about the Zimbabwean Pastor that sells anointed umbrellas for N5000 each?

How Politicians used girls, fabrics, cash to beg for votes in Edo election

300L UNN Law student, Okwuego, scams his lecturers and others of over N120million

This is why Cardi B is divorcing Offset