Surprised?
Not what you’re thinking! The young Adeboye, who got married to Folu in 1967, had
a traditional marriage first then a white wedding in church about two years
after.
According
to him, since he couldn’t afford a wedding ring then, he promised his wife
later that she would never lack anything and has since kept that promise. When the
young Adeboye could finally afford a wedding ring, he refused to buy or wear
one. He also mandated his last son, Adeleke, to do same.
Who
would not desire a husband like Daddy G.O who wouldn’t eat food or drink
anywhere his wife doesn’t approve first? Mind you, he prefers his meals freshly
cooked daily.
The
74-year-old cleric expects his wife to fast with him when he is fasting. (We
guess this saves on food expenses.) and he eats dinner between 4-00 p.m. and
5.00 p.m. and that’s it for the day.
Baba,
sometimes goes into the kitchen to give moral support and taste the food. He also
advises on which food needs more seasoning or salt.
At
least three times every year, the man of God leaves his whole family for about
five days—no phone calls, no sex, no distractions—even his wife is not allowed
around him. (We all know whose face he goes to seek.)
The
cleric used to be fat; his weight was so disturbing that his wife begged him to
do something about it. So, he started making efforts toward reducing his weight
by totally avoiding fizzy drinks and alcohol. Now, he only drinks water, fresh
fruit juice and tea.
The
father of four, now with grandchildren, would never leave Nigeria and is never
more than a 2-hours’ drive or flight away from his wife on the month of her
birthday. This is one of the promises he made to her when they got married.
Forget
the fact that he is a pastor, Baba still gives monthly household expenses fees
to his wife till date. This even increases year by year as inflation goes up.
Daddy
G.O also gives his wife monthly self-maintenance allowance. When he is at home,
he kisses his wife every morning and prays for her even before coming out to see
anyone else.
He
always buys matching watches, suit cases. Everything he needs to get, he always
makes sure he gets her own version of it.
He
always puts his wife first before his
children. Besides, they will and have all left home anyway. He has never
stopped appreciating his wife for her sacrifice over the years and putting her
dreams on hold so he could become who he is today hence he never 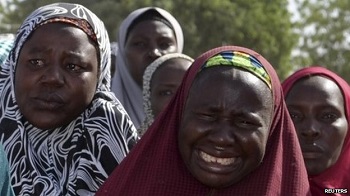 File Photo - parents of abducted Chibok girls
“I told my baby, ‘If you were alive I would never leave you. I have no choice, please forgive me’.”
Those were the chilling words of Amina (not real name), to her 28-day
old son, who allegedly died in her hands, minutes before she fled
through the vast Sambisa forest, in a desperate bid to escape the
outlawed terror group, Boko Haram.

Recounting her experience, Amina, aged 20, told an online news
portal, The Mirror that the memory of her tiny baby’s body lying
lifeless in the dust at the base of a tree in Sambisa Forest tortured
her intermittently having been held captive for five years by the...