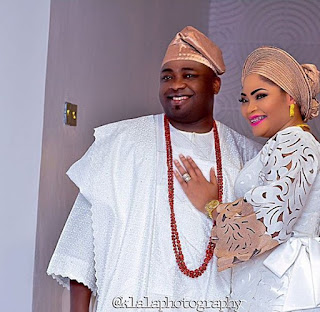 Oba Saheed Ademola Elegushi Kusenla 111, the Elegushi of
Ikateland is the youngest king in Lagos State.

Fondly called King Gushi by his admirers, Oba Saheed ascended the
throne in April 2010, following the death of his father, Oba Yekini Adeniyi
Elegushi in 2009.

Amazingly, the youthful king, who clocked 40 years in
April 2016, has just only one wife, Oloori Sekinat Aramide (nee Ipaye) and they
have been happily married for 13 years. 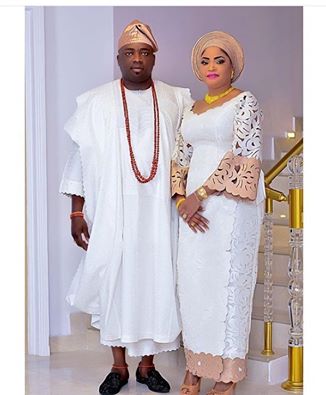 Oba Elegushi and Oloori Aramide are childhood
sweethearts. They met during their undergraduate days in Lagos. The bond they
shared was so strong back then that their friends knew that it would result
into marriage. Thirteen years down the line, the bond keeps waxing stronger and
the couple seems determined to maintain that tempo of love. The union is
blessed with three children.

Oba Elegushi is a graduate
of Economics from Lagos State University, Ojo. Also, he bagged a Masters in
Public Administration from Manchester Business School, University of
Manchester, United Kingdom.

Between 2003 and 2007, Oba
Elegushi served as the Personal Assistant to Asiwaju Bola Tinubu, the former
Lagos State governor. He was also a Senior Special Assistant on Special Duties
to Governor Babatunde Fashola between
2007 and 2010.

Oloori Aramide is a graduate of Accountancy from the
University of Lagos. She runs a chain of business enterprises, which
encompasses grocery, boutique, household wares and beauty salon. Blessed with
an ebullient nature and warm and humble dispositions, Oloori Aramide has
gradually built an enviable reputation as one of the most stylish queen in
Nigeria. She always stands out whenever she steps out at an event.

“I want Laycon and Dorathy evicted”, Nengi cries out to Biggie