A cursory look at Adedeji Otunsanya fondly called ‘Baba
Ijebu’, a civilian security guard at the Governor’ office, Oke Mosan,
Abeokuta, the Ogun State capital as he attends to numerous visitors that
throng the office for one thing or another, one would conclude that the
60-year-old is an ordinary gateman doing his duty.

But a closer look into the life of the Ago-Iwoye born master baker
turned security guard, will reveal a man who has not only gone through
the vicissitude of life, but one, who at his duty post, has served eight
state governors, and serving the ninth one, the incumbent Governor
Ibikunle Amosun.

When approached by Saturday Sun to share his experience so
far, Baba Ijebu, smiled and just said “it has been well”. According to
him, he never started out as a security guard, but as a baker.

He said after his primary school education at the Ako Wesley Primary
School, via Ago-Iwoye, in Ijebu North local government area of Ogun
state, he left for Lagos where he learnt bread making from Oduntan
Bakery at Ketu. And after three years of being an apprentice, he
established his own bakery at Ilaro in Ogun State.

Otunsanya narrated further that his own Ilesanmi Bakery thrived in
Ilaro and did not take long before he went to Owo, in Ondo State, to
establish another bakery at Isale Ijebu area of the town. During this
time, Otunsanya, stated that he made so much money and married two wives
who had children for him.

Determined to make a mark in life, Baba Ijebu, bought a plot of land
to build his personal house in Owo. To demonstrate his seriousness, he
quickly bought building materials with the intention to commence
construction in earnest, it was then life dealt him a blow.

According to him, his bakery that was doing well, took a plunge and
his once thriving business, nosedived. He added that initially, he felt
it was just normal signs of time, but when the decline became persistent
and defied all possible remedies, he opted out of the business.

This, he said, marked a critical period in his life as it became
difficult to feed his family. As if that was not unfortunate enough, his
two wives left him for good.

“I really made it big in Owo as my bakery was doing fine. I had more
than enough to feed and take care of my family, and it was then I
decided to buy land and build a house of my own. I quickly gave the
contractor money to buy some building materials with a view to starting
the foundation, but things began to nosedive.

“My bakery that was talk of the town in Owo then, started
experiencing low patronage and business was going down. Initially, I
thought it was just a sign of the times that would soon pass, but to my
surprise, the situation could not be salvaged and eventually, I had to
opt out of the business. I tried my hands on menial jobs to survive,
still, it was difficult to feed the family. But I experienced a shocker
when my two wives with whom I had enjoyed bliss, packed out”, Otunsanya
recalled in emotion-laden voice.

Meanwhile, the father of 12 children, decided that life must go on,
and returned to his home town of Ago-Iwoye. There, he took to farming,
which he did for almost two years when one of his sisters informed him
that a security guard was needed at the Governor’s office in Abeokuta
and encouraged him to apply.

“Immediately I got back to my hometown, I engaged in farming to at
least, feed myself and earn little money. I was doing this when one of
my sisters told me that there was vacancy for the post of a security
guard at the Governor’s office in Oke Mosan, Abeokuta. I applied for the
job and I got it. I assumed duties on May 12, 1988”, he explained.

Asked whether he could recollect his first salary, Baba Ijebu was
quick to say that: “I remember vividly the first salary that I
collected. Then, I was paid, after three months N123.00. When our
paymaster then, one Mr. Ajomale gave the money to me, I betrayed emotion
and thought that I, who once lived big, was being handed a paltry sum
as three months salary.

Baba Ijebu, who is due to retire from the service of Ogun state
government in 2018, however, disclosed that having served governors and
observed the perks and honour that come with the office, he has been
praying that one day, one of his children will become a governor.

He remarked that, though he is yet to build any house or buy a car,
he has every cause to thank God for blessing him with 12 children, out
whom four are graduates, while three are overseas.

“I may not have a house of my own or a car, but I thank God for
blessing me with beautiful children. They are 12 in number. Four are
today graduates, while three are abroad. As I am talking to you, I have
16 grandchildren and seeing them alone is enough for my heart to be
filled with joy.”

He recalled an unpleasant experience in the line of duty that he
won’t forget. Baba Ijebu explained that if not for good-spirited people,
he would have quit his job, when he was falsely accused of conniving
with some mechanics to remove the back axle of a car in the Government
House.

“This particular experience rattled me that I thought of quitting my
job. They said some mechanics who used to fix cars in the Government
House, removed a back axle of one car under my watch, hence, I should be
their accomplice.

“I was arrested alongside some people and detained in the police
station for two days, after which we were charged to court. I was going
to court for one year before I was eventually discharged and acquitted”.

When asked how he enjoys his past time and about his sartorial
preferences, Otunsanya, said that his job is time consuming as he
resumes by 6a.m everyday and closes whenever the governor leaves office
for the Government House. As such, he hardly has time to engage in any
other activity. He added that he would rather sleep anytime he’s off
duty.

“I sleep to relax. I don’t take alcohol. Though I am from Ijebu land, I relish Amala dudu and pounded yam, with vegetable soup. I also eat beans a lot”, he explained.

Baba Ijebu, however, said of all the governors he has worked with, it
is only the incumbent governor, Senator Ibikunle Amosun, who has really
noticed him and showed interest in him.

According to him, the governor always asks about his welfare and
recently, gave him slot for holy pilgrimage in Jerusalem. “Governor
Amosun has been kind to me as he acknowledges me despite my position as a
security guard. He gave me a slot, which enabled me to perform holy
pilgrimage to the Holy Land of Jerusalem. I just returned not long ago.
For that, I thank him and pray that God will continue to guide and guard
him.

“Apart from the governor, his commissioners, especially that of Works
and Infrastructure, Arch. Lekan Adegbite, have been good to me. Even
the Head of Service, Elder Shola Adeyemi, always extends his hand of
kindness to me. With all these, I can say I am fulfilled in life and I
pray that God will continue to bless them.”

Otunsanya submitted that after his retirement from service, he would
like to go back to bread making business, citing Ilaro as the preferred
location for the proposed bakery.

Boy with the world’s largest head finally gets first surgery 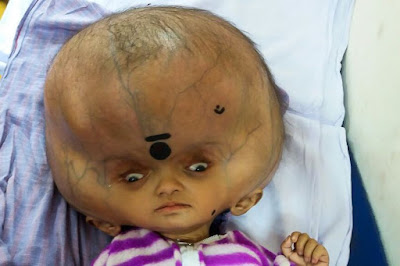 Doctors have successfully operated on a seven-month-old boy whose
family were shunned after he was diagnosed with what is thought to be
the world's largest head.

Little Mrityunjay's neighbours dubbed him 'ghost baby' and 'giant head' after his skull swelled to a staggering 96cm.
The seven-month-old boy is believed to have had the world's largest head
after he suffered from a condition known as hydrocephalus

But doctors have now removed 3.7 liters of fluid from Mrityunjay Das and
managed to reduce the size of his head to 70cm in the last month and a
half.