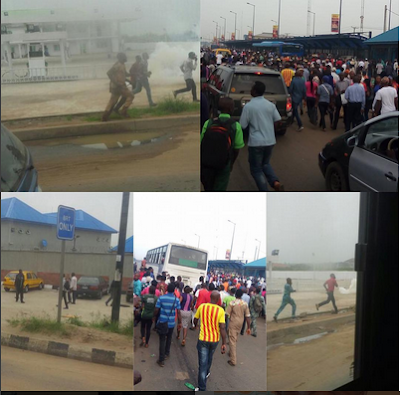 The Lagos State Government at the weekend banned LAGBUS (red buses) from plying the Ikorodu Road corridor with effect from today.
The state government said the decision was to introduce Intelligent Traffic System along the BRT corridor, and that all other franchises, apart from the BRT (blue buses) had to relocate from the corridor.

However, it was a nightmare for residents of Ikorodu, this morning when it was brought to their notice that the red bus drivers and hoodlums shut down the BRT Lanes, hindering Blue buses from operating.

The ban has left people plying Ilorodu -Mile 12-Ketu- Ojota-Maryland-Oshodi route, stranded since 6am. The acting Commissioner for Transportation, Mr. Olarenwaju Elegushi, said all LAGBUS buses could only provide end to end bus services using the expressway and service lanes along the Ikorodu road stretch.

75 year old criminal reveals how he succesfully ran a gang with his 14 children
“Sex is sweeter than anything on earth,” Ghanaian pastor says, after his first sex experience
To Top