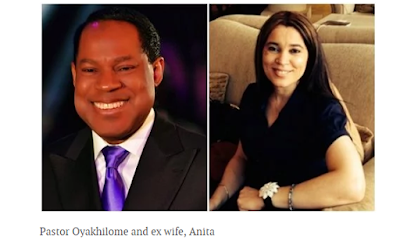 Yesterday, rumours went viral that Christ Embassy Pastor Chris Oyakhilome’s ex wife Anita may have remarried after a different surname ‘Schafar’, showed up right beside her maiden name Ebhodaghe on her blog.
You recall that back in February 2016, Pastor Anita’s marriage to Pastor Chris Oyakhilome of Christ Embassy was dissolved in the UK. And since then, she consistently ran an online portal where she blogs about various issues – www.pastoranita.org

The site was recently shut down for maintenance. Only to come back on with pronounced major
changes especially the one that sparked the viral rumours – on her latest blog post titled ‘A Simple Prayer’, Pastor Anita who used to bear Anita Ebhodaghe signed off as Anita Ebhodaghe Schafer. 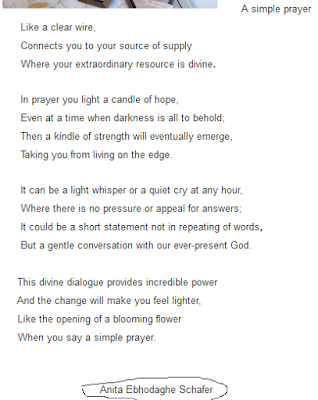 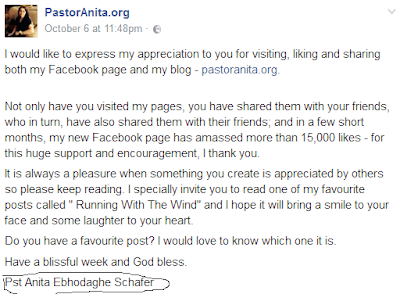 Well, here is the real gist about Pastor Anita’s name change, according to alleged insiders: It has nothing to do with her marital status.

Upon the dissolution of her marriage, she had opted to revert back to her maiden name Ebhodaghe.

Pastor Anita is the eldest daughter of Mr. John U. Ebhodaghe, OFR, former MD/CEO of Nigerian Deposit Insurance Corporation (NDIC), and a Swiss mother. She has a dual citizenship and is reported to be very close to her Swiss mother who stays in London with her. 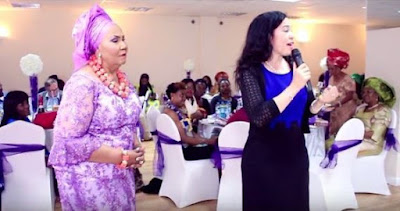 Reverting to Ebhodaghe might have brought up some issues with her PR. She is likely to be concerned with her image as an international online Pastor and may have been advised to use a more “internationally appealing” name.
Who is Schafer?
The next available name was her mother’s Swiss name Schäfer. Putting Schäfer after her paternal name Ebhodaghe makes her Pastor Anita Edhodaghe Schafer. And if the conspiracy theory is true, then we will be seeing just Pator Anita Schafer, the London-based international pastor.
It is most likely that she may never remarry as she is devoting her time now to full time evangelism and pastoral work.
Yet again, Pastor Anita has not responded to any congratulatory message on her blog post. 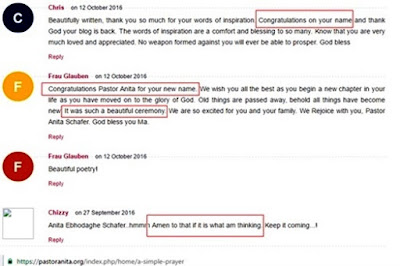 But then again, the circled comments above from Frau Glauben which congratulates Pastor Anita on her new name and saying the ceremony was beautiful point to the possibility that Pastor Anita has truly remarried. Pastor Anita approves all comments that are published on her website:

Congratulations Pastor Anita for your new name. We wish you all the best as you begin a new chapter in your life as you have moved on to the glory of God. Old things are passed away, behold all things have become new. It was such a beautiful ceremony. We are so excited for you and your family. We Rejoice with you, Pastor Anita Schafer. God bless you Ma.

'Aisha Buhari does not belong to the kitchen but...' Alibaba pens his opinion on the controversial issues