You can call him ‘Double O.’ While he doesn’t cut the figure of a man
with six packs, his stature smacks of grace, confidence and brilliance.
Though taken away from his family at a young age and with little or no
hope of having a formal education, he did not allow any unpleasant past
to hold him down. Eternally grateful to a schoolteacher who took an
interest in him, he would have to struggle to become successful in life.
His is a typical from-grass-to-grace narrative. Oladele Olaniyan,
Managing Director of Improject Limited, shares with Adedayo Adejobi how
he rose from being a dispatcher to becoming an importer and franchise
owner. He also talks about his marriage, business and what he would do
if he were Nigeria’s president. At 60, he also reflects on youth and
good health.

Viral photos of Nigeria man who helps his wife out in the kitchen, to allow her get enough rest 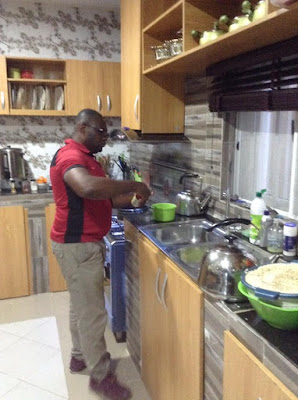 One Kalu Igwe is presently trending online for preparing dinner for his wife.
Sharing the photos on his Facebook page, Kalu disclosed that  he was preparing the coconut rice
dinner for his family just so that his wife can get enough rest.


Today, I cooked dinner for the family. I enjoy helping out in the
kitchen especially when I want my wife to take some rest and refresh. I
love doing this, it's always refreshing. Marriage Is Beautiful!
#marriageisbeautiful #kaluigwe