The picture of a young orphan identified as 11-year-old Sadiq Sani Mahuta with a neck mass (Thyroid Cancer) from Fakai Local Government area of Kebbi state caught the attention of the state governor, Dr Zainab Atiku Bagudu, after his picture was widely circulated on social media.
The issue caught the attention of the Wife of the Governor Dr Zainab Abubakar Atiku Bagudu.
The mass appeared on his neck three years ago and has been increasing in size. His family resorted to traditional medicines as they did not have funds for hospital care. The mass has increased in size and he is now quite unwell, out of school and quite unhappy.

Through her foundation Medicaid Cancer Foundation, Dr Zainab Bagudu is taking up the the responsibility for his care. The patient was invited by the foundation for initial assessment by experts in Federal Medical Centre, Birnin Kebbi to ascertain the next line of action. He was also visited at home by a welfare team from the foundation and presented with money, food and clothing.

House of Representatives clear colleagues of sexual misconduct in US 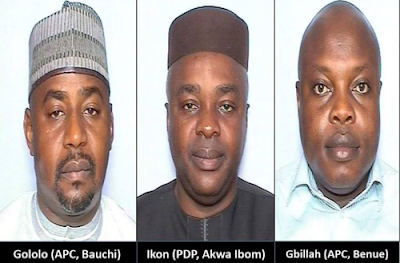 The House of Representatives have cleared three members of the house, Samuel Ikon (PDP, Akwa Ibom), Mohammed Gololo (APC, Bauchi) and Mark Gbillah (APC, Benue), all pictured above, of any sexual misconduct during their official visit to the US in April this year.

The former US Ambassador to Nigeria, James Entwistle, had in June written a letter to Speaker Yakubu Dogara, accusing the lawmakers of sexual misconducts while in the US on an official assignment.

The lawmakers vehemently denied the allegations and called for a probe panel which was set up by the house.

A statement released by the House of Representatives today reads

“The House Considered the Report of the Committee on Ethics & Privileges. The Report was on Allegations of Sexual Misconduct against Hon. Mark Terseer Gbillah, Hon. Mohammed Garba Gololo & Hon. Samuel Ikon by the United States Ambassador to Nigeria Mr. James Entwistle, while they were attending the International Visitors Leadership Programme in Cleveland, Ohio, USA from 7-13 April, 2016.
The following were the Recommendations of the HOR: (i) That Hon. Mohammed Garba Gololo, Hon. Mark Terseer Gbillah & Hon. Samuel Ikon are cleared & exonerated from the allegations leveled against them by the United States Ambassador to Nigeria in his June 9, 2016 letter to Rt. Hon. Speaker for want of evidence. (ii) That in the light of the foregoing, the Hon. Minister of Foreign Affairs do engage with with the United States Ambassador to Nigeria, with a view to finding a seamless resolution of the domestic fallout of this of this unfortunate incident as it relates to Hon. Mohammed Garba Gololo, Hon. Mark Terseer Gbillah, and Hon. Samuel Ikon.(iii) That the Ministry of Foreign Affairs do write to remind the United States Embassy of the need to always adopt the official channel of communications in its dealings with any organ or institution of government. 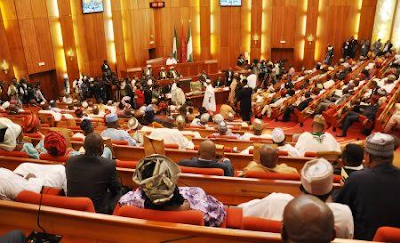 The Senate today rejected two of President Buhari’s nomination as members of the board of the Niger Delta Development Company NDDC. The rejected nominees are Olatokunbo Ajasin, son of the former governor of Ondo State, late Chief Michael Adekunle Ajasin and Donatus Enyinnah from Abia state.
The senate committee on Niger Delta while presenting its report on the screening of the nominees, said both men were dropped on the ground that their nominations breached the NDDC Act as they are not from oil-producing areas of their respective states. Sixteen out of the 19 nominees were confirmed. The nominee for Imo state was not confirmed because he failed to show up for the screening. See list of the nominees after the cut. 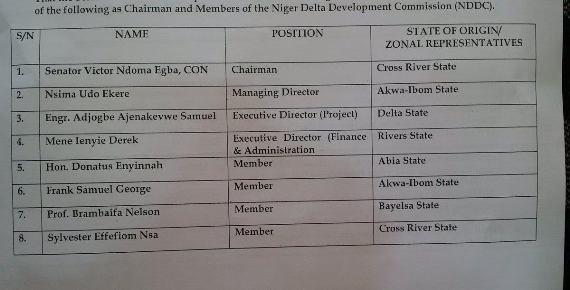 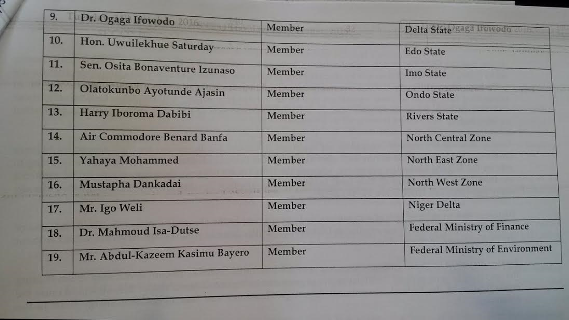 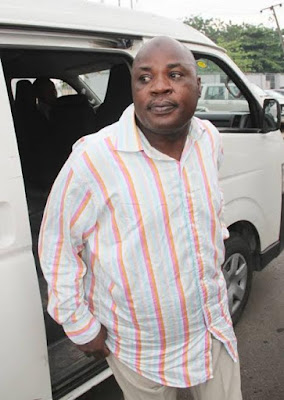 The Economic and Financial Crimes Commission (EFCC) today, October 11, arraigned one Wahab Olawale Amoo and his company, Wahab Amoo and Sons Nigeria Limited before Justice Adedayo Akintoye of the Lagos State High Court, sitting in Igbosere o-count charge bordering on four counts bordering on Conspiracy, Forgery and Obtaining by False Pretence to the tune of N50million.

The accused person allegedly conspired with his company, the 2nd accused person, to defraud the complainant Fidelity Bank Plc of the sum of Fifty Million Naira (N50, 000, 000. 00) only by using forged documents to secure a loan facility through a property which was under caveat at the Land Registry, Lagos State. He pleaded not guilty to the charges preferred against him.

In view of his plea, the prosecution counsel Fadeke Giwa asked the court for a trial date and also requested that the defendant be remanded in prison custody. However, the defense counsel Eric Uteh told the court that he served the prosecution the bail application for his client, but Giwa said she was served in court and would need time to reply. 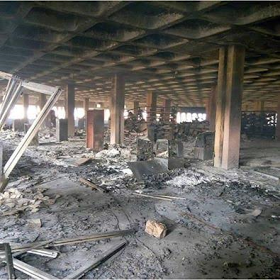 There was a serious fire incident at the Library Complex, Naraguta Campus, University of Jos on Saturday 8th October. It affected the Main Library in the Complex, the Faculty of Social Sciences and some Departments in the Faculty of Management Sciences.

Registrar, Monday M. Danjem has now issued a statement announcing that Senate of the University of Jos has approved the resumption of the postponed First Semester Examinations for the 2015/2016 Session.

“All Students whose Faculties were affected by the fire incident are advised to liaise with their respective Heads of Department who will direct them appropriately on the Halls where they are expected to write their Examinations.”

“All such affected Students are also to please note that all First Semester 2015/2016 Session Examinations earlier written but which Answer Scripts were burnt during the inferno, will now be rescheduled to a later date to be communicated to them by their respective Heads of Department.” 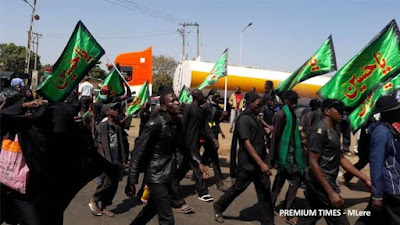 Soldiers in Kaduna this evening surrounded a gathering of Shi’ite Muslims in the state. According to reports, the Muslim group had disobeyed the orders of the state government banning their activities in the state. They gathered at a mosque to commemorate historical events associated with the Islamic month of Muharram that is particularly significant in the Shia calendar when they were surrounded by the soldiers.

“Shortly before the Kaduna Markaz mosque on Zango Road was encircled by armoured military vehicles carrying heavily armed soldiers and also an ambulance were among a convoy of 18 military vehicles seen nearby’‎’.The group last year December clashed with the Nigerian Army resulting in the death of some of its members. ‎The group’s leader, Ibrahim El Zakzaky is still in DSS custody.

The six persons, who were abducted from the Lagos State Model College in Epe area of Lagos, last week, have been released. They were released about 10.35p.m., Tuesday night.
Though the exact amount paid as ransom could not be ascertained, Vanguard gathered that one of the families paid N1 million for their ailing child. Distraught parents of the abducted students, were said to have visited the school, yesterday, where a meeting was held with management of the school. Some of them left in the evening. A relative of one of the students, who was contacted confirmed that their son had been reunited with them. However,Vanguard, gathered, yesterday, that the family of one of the abducted persons from Lagos State Model College, Igbonla, in Eredo Local Council Development Area, last Thursday, had paid N1 million ransom to the kidnappers.
The money, as gathered, was dropped at an undisclosed designated place, as instructed by the kidnappers, for the release of the ailing captive. The agreement to drop the money was reportedly reached between the kidnappers and one of the family members after much plea on behalf of the sick captive. The relative had informed Vanguard, Monday, that the family had raised N1 million, which it intended to pay to the kidnappers. He also confirmed payment of the money.
Tags
Kemi filani headlines

Nnamdi Kanu Reportedly Goes Into Hiding, President Buhari Leaves For The USA After Meeting With Some Governors And Other Major Headlines You Missed Today