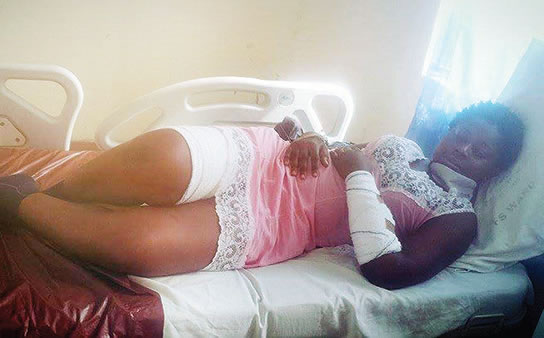 A National Youth Service Corps member in Bayelsa State, Miss Loretta Okoro, has cried out for help over pains caused by bites she sustained from her employer’s dogs.It was gathered that 28-year-old Okoro was bitten by security dogs in her employer’s house on December 5, 2015, where she was posted for her primary assignment.

It was learnt that three dogs on the premises of the employer, Prof. Klem Imananah, reportedly pounced on the corps member at about 7pm on that day.

Speaking with PUNCH Metro on Tuesday, Okoro lamented that her employer and the state chapter of the NYSC had abandoned her to her fate.

She alleged that since the incident occurred, she had not gone through proper medical treatment and that her health had deteriorated.

Okoro, a member of Stream A, with NYSC number NUA/2015/162926, said though the wounds had healed on the surface, she later started suffering from hallucination, numbness, mental torture and psychological imbalance.

Okoro, who said she was posted to the residence of Imananah at Opolo in the Yenagoa Local Government Area of the state, accused her employer of neglect.

She said, “On December 5, 2015, I was attacked by three dogs owned by Prof. Imananah who I was attached to. The first hospital I was taken to had no doctor to attend to me.

“I called a friend of mine who came to take me to the Federal Medical Centre in Yenagoa. The injuries were cleaned every day and I was given injections. I spent three weeks at the hospital and later went home.

“The following day after being discharged, I started feeling some strange ailment. I have been trying to be stable since then. I can no longer sleep. I see strange and horrible things in my dreams. I have been reaching out to the NYSC to know if they can be of help, but nothing has happened till now. They claimed I am only pretending.

“Even the owner of the dogs has been threatening me with court action, saying that I am embarrassing him.

“I have not been able to do anything. Things have gone beyond my imagination. I have yet to get back to normal.”

Okoro, an indigene of Imo State, appealed to the federal and state governments to wade into the matter.

She said the NYSC in the state had not given her matter the attention it deserved, adding that since the incident occurred, no one from the NYSC had called to know her condition.

Okoro’s colleague, who identified himself only as Kingsley, said the victim’s health had worsened, adding that she needed urgent medical attention.

Kingsley said, “It was unpleasant on Monday evening. She was hallucinating and screaming throughout the night. I knew her from the camp. But now, everything about her health has changed. NYSC is supposed to protect corps members. But with what I have seen in the case of Lorreta Okoro, we are just on our own. If something urgent is not done, Lorreta may lose her life.”

The employer, Imananah, confirmed that Okoro was bitten by his dogs but said he ensured the corps member was treated until her injuries healed.

He said his dogs were free of rabies, adding that Okoro would not be alive if she contracted rabies from the incident that occurred since December.

He said, “The girl wants to extort money from me. She thinks it is easy. If a dog bites you and the dog is normal, nothing will happen to you.

“It takes only a few days for someone bitten by rabies-infected dogs to die. What she is saying is total nonsense.”

Imananah said he spent about N200,000 at the FMC to treat Okoro, adding that she was given full dosage of anti-rabies at the hospital.

The state Coordinator of the NYSC, Mr. Anthony Ekeocha, when contacted said he could not respond to the matter on the telephone.

40-year-old woman, others arraigned for stealing pastor’s fowls worth N1.5m

Recession: Angry employee beats up employer for delaying his salary