Dear KFBers, we have got loads of interesting stories in tonight’s #MajorHeadlinesYouMissedToday feature…enjoy
Ghastly Motor Accident Leaves Many Injured Along Akure Road (Photos)

A serious road accident has left many seriously injured after two cars collided on top speed on Sunday. Many were left injured after the accident occured
Many have been left seriously
injured after a head-on-collision involving a car going to Akure In Ondo
state and another one coming from Edo State. It is believed the
accident happened along the popular Lagos-Ibadan expressway. According to Sunny Basikoro, the accident occurred on Sunday. One
of the cars involved in the accident is said to belong to Cross Country
transport. Relevant agencies have been informed to proceed to the scene
of the incident and help the victims. The number of the casualties is yet unknown. 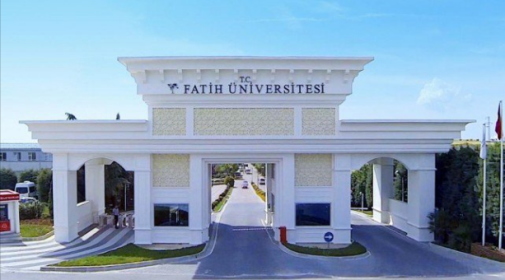 More than 50 Nigerians studying in Turkey have been reportedly arrested by the Turkish police over their alleged involvement in the failed military coup which took place in the country on July 15th.

According to Thisday, the detained Nigerians are mainly students of Fathi University, one of the private universities in Turkey.

A close relative of one of the students said “Upon arrival at Ataturk International Airport in Istanbul, they were all escorted to a room and their passport confiscated by Turkish police. When they enquired why they were clamped in a dirty room, the police said they are students of a terrorist organisation. They offered to transfer them to government schools but on the condition that we will pay same fees as private universities,”.The Fathi University is among the 2099 schools, dormitories and universities shut down in the wake of the July 15th failed coup in Turkey. The Turkish authorities said the schools and universities were terrorist schools because they have links with Islamic scholar Fethullah Gulen, whom the Turkish government had accused of being the mastermind of the failed coup attempt. It would also be recalled that the Turkish Ambassador in Nigeria Hakan Cakil, had requested the Federal government to close down 17 Turkish schools in Nigeria for alleged links to the Hizmet movement, a request which was turned down. 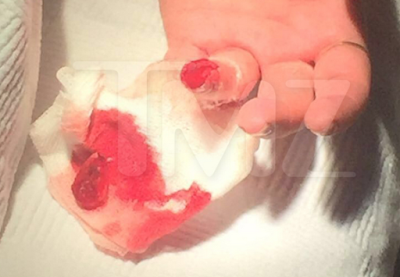 According to a report by TMZ, Lindsay Lohan lost a portion of her ring finger in a boating accident.

Lindsay
was enjoying Sunday in the ocean off Turkey when she tried pulling up
the boat anchor and became entangled in it. The anchor pulled her down
into the water and she struggled to get back in the boat as she tried
untangling herself.
The anchor sliced off the tip of her finger.
Her friends went on the hunt and found the detached digit on the deck of
the boat. They rushed LiLo to an ER, where a plastic surgeon
reattached it.” – See the photo after the cut… 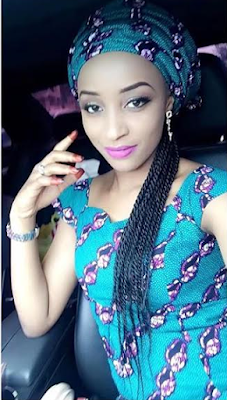 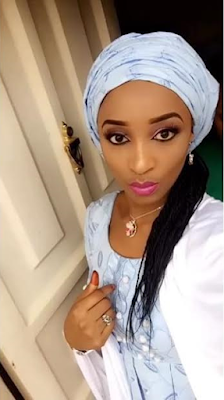 Top Kannywood actress, Rahama Sadau has been expelled from the Hausa film industry by the Motion Pictures Practitioners Association of Nigeria.

Sadau was expelled for featuring in a romantic musical video by Jos born musician, ClassiQ.

The statement dated October 2 and signed by the Secretary of the association, Salisu Mohammed, also warned other actors and actresses to henceforth follow the rules binding their participation in the Kannywood film industry. 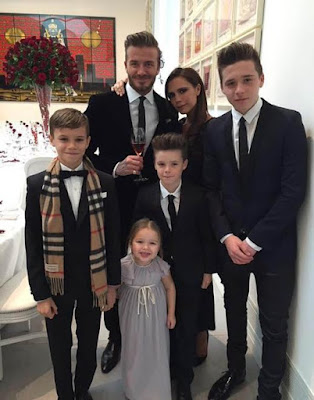 Fashion entrepreneur and business woman Victoria Beckham, 42, has finally addressed rumours making the rounds that she has boosted her already spinach-heavy diet with “broccoli and leafy greens rich in folic acid” so she can get pregnant and deliver baby number 5…
David Beckham, 41, told chat show host Jonathan Ross in 2012:
“We might have one more or two more, you never know. We’re not thinking about it yet, but if it happens, great. We’re enjoying the kids as it is. It’s always a thought.

“I mean, we’re busy people and we’re enjoying the four kids that we’ve got already and we’re lucky, we’re lucky to have four healthy children.” 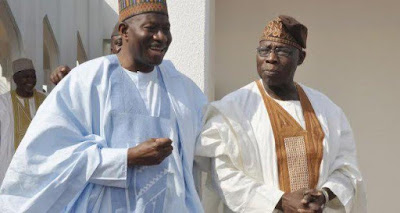 Former President Obasanjo yesterday said the immediate past president, Goodluck Jonathan, ignored all his warning of an impending recession and the effects of reckless spending which he saw in the past government. Obasanjo made the accusation while speaking at a lecture organised by the Youth Fellowship of Owu Baptist Church, Abeokuta to mark Nigeria’s Independence Day anniversary.
“Unemployment is a major problem in the country today and if we don’t take care, it will consume all of us. In fact, the rising unemployment is a time bomb. Whoever that has lived to witness the celebration of today should thank God. Things are not what they should be, but we should pray that next year will be better than this year. We thank God for those who are alive, we prayed for the souls of those who have labored for this country and who have passed on to rest in perfect peace”he said

Buhari working himself to the bones for Nigeria – Tunde Bakare
The founder of The Latter Rain Assembly, Pastor Tunde Bakare, has stated that President Muhammadu Buhari indeed inherited ‘rot’ from the past administration and is working himself to the bones in order to put things in order.
He implored Nigerians to be patient with the President as the desired change cannot be achieved in one day.
Recall that Buhari had recently said memories of the past administration led by President Goodluck Ebele Jonathan will never be overlooked, stressing that he will continue to keep the “mistakes” in view, to guard against repeating them, as according to him, the sufferings presently experienced in the country are the outcome of those mistakes.
Speaking with the Punch, the convener of the Save Nigeria Group backed the President, saying, “The human memory is fickle and we forget things easily. In the past administration, in Borno State, how many local governments were seized by Boko Haram? They were many. But today, not a single one is being controlled by the sect.
“President Buhari inherited rot from the past administration and we forget so quickly because our expectations are so high. The Change mantra was so real to us that we thought those who were tenants would become landlords overnight and those who were riding ‘okada’ would just own Mercedes Benz cars.
“Things don’t happen that way. If it took God seven days to fix the chaos in the earth, please give us a break because a day with God is like a thousand years and a thousand years is like a day. Is this government working or they are just sleeping?
“I love what former President Olusegun Obasanjo said recently. He told us how he inherited a low foreign reserve and then went ahead to get the best and the brightest people to build it. That’s what is needed here.
“A good leader must have wisdom and courage to take those actions that need to be taken. What I’ll implore President Buhari to do is to let Nigerians know concerning the things that will start happening in October. He should let them know that, ‘See, this is where we are and this is where I want to go and to go between here and there, there’s a gulf and we need to blow the bridge. These are the materials we’re using to build the bridge.
“These are the men I want to use and I’m giving them so-so timeline to deliver. This will encourage the people to know their president is talking to them and we pray that the communication should continue, but as far as working is concerned, the man is working himself to bones. I also think the APC should put its house in order and stop fighting because when a chicken starts to eat its intestine, the end is near,” Bakare added.
Speaking further on the President’s focus on fighting corruption and how it is believed to be affecting other areas of governance like the economy, he stated, “In fact, I don’t think President Buhari is the one fighting corruption. I only said it’s his vision. He’s not the Chairman of the Economic and Financial Crimes Commission, he’s not the Attorney General of the Federation, he’s not the Inspector-General of Police.
“What needs to happen is to have a formidable team with clearly stated responsibilities. The President is one man and can’t do all the things I’ve enumerated on his own. When you have a team that is working together, things will improve because you cannot say this is what I will do and leave the other areas to suffer. It’s not going to augur well for the country. There seems to be a disconnect somewhere.
“However, in the month of October, I’m sure we will begin to smile. We may not laugh but I’m sure we will begin to see certain changes in certain directions,” the cleric said.

The Minister of Information and Culture, Alhaji Lai Mohammed, has reiterated Federal Government’s commitment to the rescue of the Chibok girls abducted by Boko Haram terrorists.
The minister spoke at a live programme on Channel Television on Independence titled “Nigeria at 56: Recursive, Resilient, Rising.”
Mohammed stated that no group, local or international could claim to have more stake or be more committed to the rescue of the girls than the Federal Government.
He added that the issue of the rescue of the girls was a humanitarian one that everyone or group should be “passionate but rational about”.
The minister said that contrary to the position of some critics, government had robust counter terrorism policy and had recorded significance success in fighting Boko Haram in the North East.
He noted that the fact that the Chibok girls were yet to be rescued should not be a yardstick to write off the achievements of government in decimating the Boko Haram.
Mohammed recalled that upon assumption of the President Muhammadu Buhari administration, many parts of the North-East were under the control of the Boko Haram and were not safe and accessible.
The minister said that the situation was not the same today as no part of the North East region was under the control of the group.
He reiterated that Boko Haram had been decimated and government was working daily to ensure the release of the abducted girls.

“I want to keep her a little girl forever” Kirk Franklin’s emotional message to his daughter about letting go as she gets married (photos)
Monday daily devotional by Pastor E. A. Adeboye (Open Heavens 3 October 2016) – The Blessing of Solitude III
To Top