A few years ago, veteran actress, Hilda Dokubo stepped aside from Nollywood.
Her departure had created a vacuum, as many of her fans sorely missed her.
Now, she is back fully in the industry with a cameo in the wave making
movie, The CEO produced by Kunle Afolayan. In this exclusive chat with
Entertainer, Dokubo reveals why she decided to take a break from acting.
Enjoy it.

What are you up to lately?
I just finished The CEO, a film produced by Kunle Afolayan. Currently, I
am working on a new movie. I am also running a training center, which
has been on for some time now. I am doing it with women in the Niger
Delta. And we are doing well. By the end of September, I will be
starting small businesses for 35 women.

What inspired such project?
I just wanted to give back. I think that if we support a lot of people
then we’ll have fewer people looking for jobs, fewer crimes, and fewer
things to worry about. And together we can build a better society, the
kind of society we want to see. And you will be proud of what you have
done as a person if you ensure that what we have is actually what you
want to see.

You quit Nollywood for some years, are you finally back into the industry?
I needed a break at the time that I took a break. I needed a break, I
wanted to do something else, I wanted to give back to the society, and I
wanted to go to school. I wanted to work with regular people, so I took
some break to achieve these things. You know, there are times in your
life that you feel like there is something that you need to do, and you
need to do it quickly. I have done that, so the break time is over, and
I’m back to my business.

Was it easy for you to get your feet back into the industry?
Let me blow my trumpet a bit. With all modesty, I don’t think that
anyone would mention pioneer actors in this country and my name would be
missing. It’s not going to be easy except somebody is trying to be
dishonest.

Do you think mediocrity has been kicked out of Nollywood?
Let’s put it this way. I don’t know of any industry without
professionals, amateurs, and wannabes. And it is not peculiar to
Nollywood. This movement is a process; it’s not the end of the journey
yet, and we are in that process so you are bound to have all kinds of
people. You are bound to have the good, the bad, and the ugly. And you
have the up and coming, they are not good but with time they will be
very good, and you would be amazed how fast they have grown. So, we are
work in progress.

What makes one a successful actor?
It’s the capacity to interpret a role. It’s when you strike your
audience, making them forget that you are only a performer. You make
them believe you so much that they travel with you and become part of
the performance. You are not the only one performing because you are
getting the emotions off them, and all the emotions you want them to
give, they give it all out. That is how you know a damn good actor.

How do you balance it all?
I just balance it; it is great, really. But I have to mention here that
you must have supportive people around you. You must have your children
supporting you; you must have your parents, your family, and your
friends supporting you. I want some people to know that the loneliest
people are celebrities because people think we have everything we want.
And sometimes people judge us without even knowing us, so we are lonely
people but we are not alone. We’re just lonely, we don’t have people
that we can depend on or run back to.

How would you advise young couples in Nollywood to safeguard their marriages?
Don’t safeguard it (Laughs). Just love it. Love your home, love the man,
and love your kids. Do the best you can, respect everyone including
yourself. Respect what you do, don’t force it. Somebody will love and
respect you. And don’t try to shy away from making mistakes; just live
your life one day at a time, loving who you are. And let the love inside
you show on the outside. If you make any mistake, be quick to say ‘I am
sorry’. And mean it. It’s one thing to say ‘I am sorry’ and it’s
another thing not to mean it. When you are sorry, it means, you will not
do that thing again. So, learn how to apologise, don’t feel too big. By
the way, this is your husband, and you can’t be too big for him.

The hilarious moment Buhari cross checked to be sure his wife, Aisha voted for him (watch)

At what point, does a young actress say she cannot go on with her marriage?
When it becomes very abusive. Any man who is a real man will never abuse his wife.

What if she catches him cheating?
You know I’m a Christian, I’m born again, and I’m a minister so no
ground is good enough. The Bible charges a man to love his wife as God
loves the church. God has not abandoned us because of our sins, even
when He caught us red-handed. He still loves us; He’s still giving us
the best of help. However, your inner strength should tell you that you
have to be morally upright. If you are morally upright, you are not
doing it for anyone but for yourself. So, do the best that you can be
proud of.

A lot of young actresses are desperate for roles; some pay or even give sex for role. What advice do you have for them?
Don’t give anything other than your talent. If anybody has to pay here
then they should pay you. Come on, you have the talent, love it, do your
work and that should pay you. 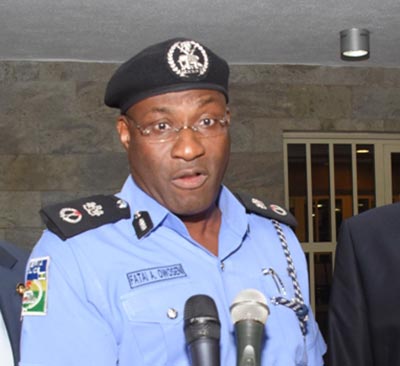 Lagos State Commissioner of Police, Mr. Fatai Owoseni
Some gunmen on Saturday attacked Lekki Gardens Estate, in the Isheri area of Lagos State and kidnapped four residents.
SUNDAY PUNCH learnt that the
assailants entered into the community through the waterways around 8am
and first shot sporadically into the air.
The gang whisked away their victims in a speedboat.
It was gathered that the residents were on an early morning jogging exercise when they were taken away.
A community leader, who spoke on
condition of anonymity, said the suspected militants had actually taken
nine hostages, adding that only four were taken away because the boat
could not take...
Click to Continue Reading
To Top