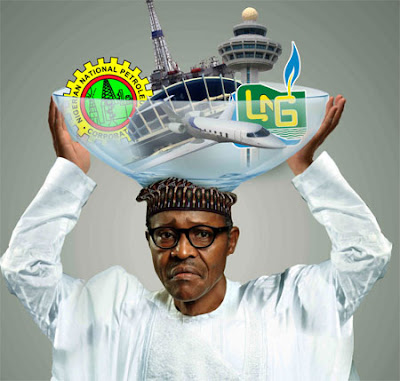 The council had recommended the sale of the assets in raising capital to shore up foreign reserves and by extension, bailing out the country from the current economic recession.
The Senate decision was in line with the recommendations of its ad-hoc committee set up to review its last week’s two-day debate. Buhari The committee in its report submitted in plenary, outrightly rejected the government’s planed action, a decision which ran contrary to the position of the Senate President, Bukola Saraki, who had earlier backed government’s decision.
The Senate in line with recommendation to that effect, called on President Muhammadu Buhari to as a matter of urgency, prepare an economic stimulus Bill containing all the fiscal stimulus packages, investments, and incentives designed to pull the country out of recession, to the National Assembly for accelerated consideration and passage.
The committee in its recommendation of the sale of National Assets which was however rejected, said “being a sensitive issue should be approached from a commitment to protecting the common patrimony of Nigerians by preventing the assets from falling into the hands of sharks, assets strippers and cannibalizes while also guarding against the fuelling of further inequities in the society and polity” 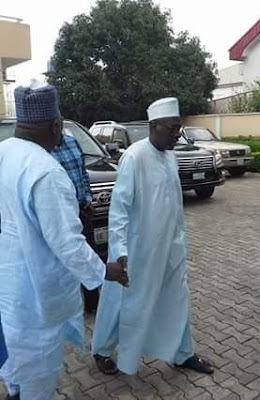 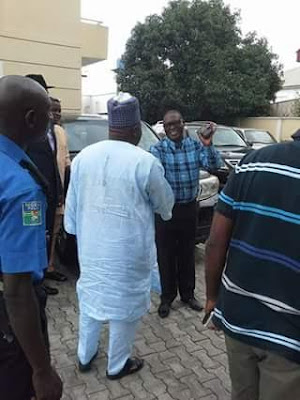 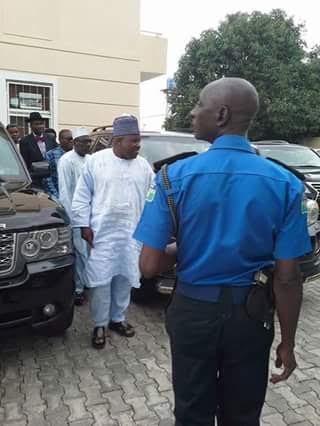 Factional PDP leader, Ali Modu Sheriff held a reconciliatory meeting with Makarfi- led Caretaker Committee today to end the crisis that has rocked the party for many months. 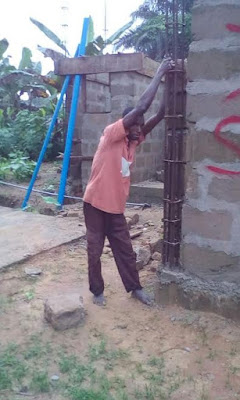 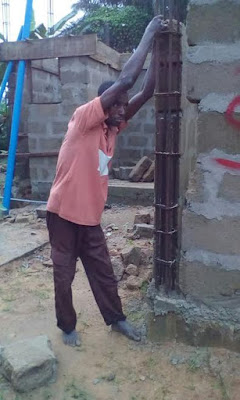 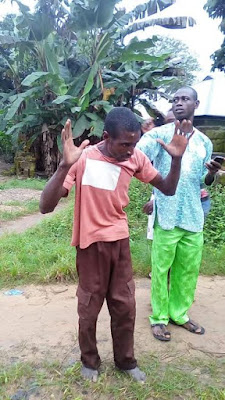 This man allegedly got stuck while attempting to steal building materials from a site in Akwa Ibom state.
Narrating what happened, Facebook user Dominic Esifa said:
“Residents of Esuk Oro, Oron woke up this morning to meet this man Effiong from Udung Okung stuck to building materials he was attempting to steal in a site. It took the intervention of the owner of the property to get him off the hook. He has since been handed over to the police.” 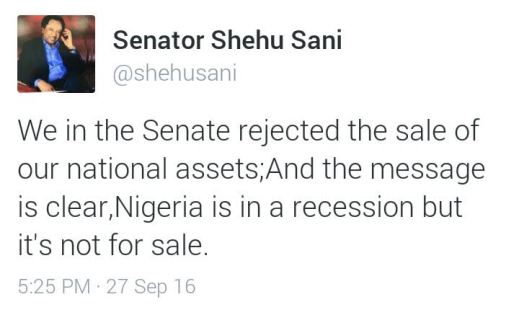 The Nigerian Senate today rejected the sale of some National assets like NLNG ltd to reflate the economy which is currently in recession.

Senator Shehu Sani who agreed with the decision of the Senate, shared this via Social Media. 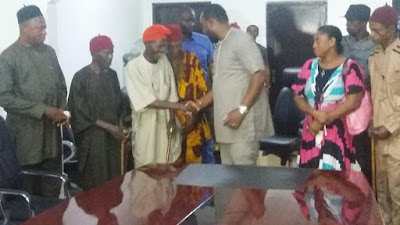 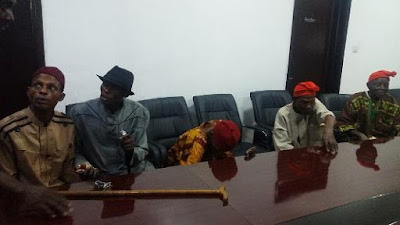 Some chiefs, elders and title holders of Ubima Ward 8 in Ikwerre LGA of Rivers State, the home town of former Governor and current Minister of Transportation, Hon. Rotimi Amaechi, today dumped APC to join PDP.
According to Chri Omodu,who posted the photos,
Presidency issues directive for the immediate clearing up of the Apapa gridlock

“THE LEADER OF THE ELDERS, OHA, ANTHONY OMEZURUKI, SAID THAT THEY ARE OVERWHELMED BY THE PERFORMANCES OF PDP IN IKWERRE LGA. LED BY FORMER CTC CHAIRMAN AND STATE PDP PUBLICITY SECRETARY, HON. SAMUEL NWANOSIKE.

EDO: APC planning to write and announce fake results with the help of INEC- PDP alleges 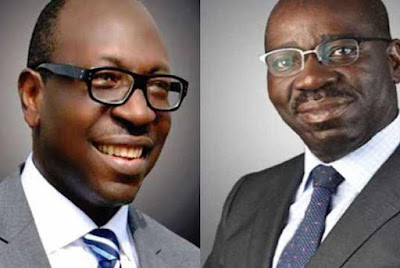 Ahead of tomorrows governorship election in Edo state, PDP has released a statement alleging that the opposition, APC is plotting with INEC to announce fake results after voting. Read the statement below As final preparations are put in place for the Edo State Gubernatorial Election which is slated to take place tomorrow September 28, 2016, it has become necessary to address a number of salient issues.
We are aware that President MuhammaduBuhari has warned the INEC Chairman in private to ensure a free, fair and credible process in Edo State. We are also aware that the President has also warned the relevant security agencies to ensure a preservation of the peace in the State during the Election.
However, despite these warnings, we have uncovered several plots between members of the All Progressives Congress (APC) and staff of the Independent National Electoral Commission (INEC) to manipulate the Election results.
These plots include:
a. the distribution of fake results sheets to polling units in different areas of the State;
b. the use of Local Government Collation Officers to write fictitious results on real results sheets of some Local Government Areas;
c. the use of thugs brought into the State from other States to harass and intimidate the citizens of Edo State;
d. the use of security agencies to arrest, harass and intimidate members and supporters of the PDP; and to provide security cover for members of the APC to execute their nefarious plots.
It is important to sound this note of warning again to INEC and APC that the Edo people are united in their determination to vehemently resist any attempt to manipulate the electoral process. We urge INEC to ensure that its staff abides by the provisions of the Electoral Act 2010 (as Amended) as well as its Electoral Manual & Guidelines.
We urge the relevant stakeholders to allow the Edo people to freely elect the Leader they desire for the next four (4) years and to allow the will of the people to prevail.
God bless Edo State. God bless the Federal Republic of Nigeria.
Signed:
Prince DayoAdeyeye
National Publicity Secretary
Emir of Kano, Sanusi Lamido sends deep warning to Northerners


Some Nigerians believe corruption is not wrong – EFCC boss, Magu

The Acting Chairman of the Economic and Financial Crimes Commission, EFCC, Ibrahim Magu, on Tuesday, said not all Nigerians believe corruption is wrong.
Magu said this shortly after a workshop organised for journalists covering activities of the commission on Tuesday.
Stressing that he was not expecting to be pampered by journalists, Magu said, “When I’m wrong, tell me. It is easier for you to correct my wrong doings so I want to hear the wrongs so that we can correct them, there’s nothing like perfection.”
The anti-graft agency boss said the fact that he was operating in the capacity of acting Chairman had given him the determination to pursue the current anti-graft crusade.
According to Magu, “You can’t make everybody to key in because some people don’t believe corruption is wrong; you should not expect 100 percent acceptance but I’m sure a greater number of Nigerians are with us.
“The fact that I’m acting gives me more determination. You never know, when I’m there, confirmed, I’ll crush it, corruption.
“That’s why sometimes I put EFCC on 24 hours basis so that we can do what we can within the available time [of acting capacity]. I think I have more determination to clear the ground as much as we can.
“The evil of corruption affects everybody so it is our duty to put our house in order. It is not only for us [FCC] as we cannot claim monopoly of knowledge of fighting corruption; everybody is a stakeholder. If we work together, we are going to record tremendous success.”

Investigation has revealed that an unidentified pastor has landed in police net for allegedly having a sexual intercourse with a woman co-habiting with a man, in the guise of praying for her at about 5 am on Monday September, 26, in Warri, Delta State, DAILY POST can exclusively report. The woman died reportedly in the course of the intercourse.
Our correspondent gathered that the matter is currently being kept secret by members of the unknown woman’s family, because they want to amicably settle the matter with the pastor’s family.
Information had it that the pastor in question was arrested by the police from “B” Division immediately after the woman, who sources say was co-habiting with a man, died.
The Divisional Police Officer of “B” Division, CSP Anieteh Eyoh declined comments on the matter when this newspaper visited the police station as controversies continued to trail the death of the yet-to-be identified woman.
The Delta State Police Public Relations Officer, SP Celestina Kalu in a swift response via text message stated that the woman died as a result of “Sudden” and “Unnatural death”.
SP Kalu noted that the woman collapsed due to ill health soon after she visited the pastor, who immediately rushed her to the church for prayers.
The Police Image Maker’s added that the woman’s condition worsened and was later confirmed dead by persons she did not quote.
The text message reads: “Case of sudden and unnatural death. A known woman by the family members as the friend of pastor, visited him but collapsed out of ill health. The pastor rushed her to the church for prayers. And moved her to the hospital when the condition got worse. She was confirmed dead later. B Division investigation told.”
Juventus manager defends Ronaldo as they lose 2-0 to Atletico Madrid

No fewer than four people were reported dead and two missing after an helicopter crashed en route a Chevron oil platform, off the Angolan coast, the U.S. oil company said on Tuesday.
The helicopter was said to have left Malongo port in Angola’s Cabinda province on Monday at 1523 local time to make the short journey to the Tombua-Landana offshore oil platform, but never arrived.
“The helicopter did not reach its intended destination. It was carrying five passengers and one pilot,” Chevron said in a statement, adding that one of the passengers was an employee while four others were contractors.
“Extensive search and rescue activities continue for those who remain missing.”

Chevron did not say if there was any impact on oil production from the crash or the search and rescue operation, which involved 19 marine vessels and three helicopters, reports Reuters.

Angola competes with Nigeria to be Africa’s largest oil exporter, shipping around 1.7 million barrels per day, mainly to Asian markets.

Laura Ikeji compares herself to Kylie & Kendall Jenner, mocks critics for saying she’s feeding off her sister’s fame and fortune 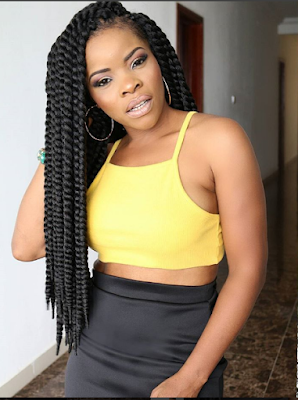 Well, for those who think Laura Ikeji, the younger sister of popular blogger, Linda Ikeji is living off her sister's fame and fortune, she has a message for you all.