Tragedy struck at the Ogoja Market, LASU-Igando Road, Lagos State, after operatives of the Special Anti-Robbery Squad shot dead an undergraduate of a polytechnic in Edo State, Eldanojie Joseph.The 20-year-old business administration student was said to be on a visit to his cousin, Friday Ojah, who lived on Alape Street, Iba Ojo, when he was hit by a stray bullet.

PUNCH Metro learnt that the operatives were chasing a suspected Internet fraudster, identified as Badoo, who had parked his car and fled upon sighting the officers.

The operatives were said to have started shooting sporadically.

The Esan, Edo State indigene, who had reportedly gone out to buy a canned drink with his cousin, was hit by a stray bullet.

He was said to have died on the spot.
Our correspondent was told that the officers took Joseph’s corpse, dumped it in the boot of the suspected fraudster’s car and drove off.

The cousin, Ojah, told our correspondent on Thursday that the police, in order to cover up their misdeed, said Joseph was a cult member.

He explained that Joseph had only arrived in Lagos about three weeks ago.

He said, “We grew up and attended the same primary and secondary schools together. He gained admission into a polytechnic in Edo State, while I am still processing my admission into the same school.

“Around 9.30am on Monday, we strolled out to buy a can of soft drink. We were returning home when we learnt that some policemen were chasing somebody.

“We decided to go through the back of the market. As we turned back, my brother was hit by a bullet in the head and he fell down immediately.

“As I tried to call for help, I saw that the policeman that shot him had aimed his gun at me. I fled the place immediately.”

He said the officers put the corpse in the boot of the car left by the suspected fraudster and drove away.

PUNCH Metro gathered that the corpse was taken to the SARS headquarters in Ikeja, from where it was taken to a morgue.

Our correspondent was told that the SARS team that conducted the operation alleged that the victim was a cult member and he had attempted to shoot at them when they fired back.

“But it was all lies. He only had the canned drink we bought, a phone charger and a handset on him when the incident happened. The police lied to cover up their misdeed,” Ojah added.

The policemen on the team that killed the victim were identified as Lucky, Oganla.

A legal practitioner and family friend of the victim, Saheed Sanni, decried the killing, saying the policemen must be arrested and brought to book.

He said, “Cases like this, involving SARS officers, have become rampant in the state. They kill with impunity and believe they can always get away with it. Whereas Section 33 of the 1999 Constitution protects the sanctity of human lives and prescribes punishment for violation of that sanctity. You cannot just take anybody’s life without a court order or judgment. We are taking up the case and justice must be done.”

The Police Public Relations Officer, SP Dolapo Badmos, said she had yet to be briefed on the incident, adding that she would get back as soon as the Officer-in-Charge of SARS briefed her.

She said, “The OC SARS has yet to brief the command on that issue and he has been directed to do so. I will get back as soon as I have the facts of the case.”

Two residents fought and stabbed each other to death in Lagos

A scuffle between two residents of AIT Road in the Alagbado area of Lagos State became a tragedy on Wednesday after they stabbed each other to death.

PUNCH Metro learnt that the two men – Owolabi Yusuf and the other, identified simply as Isiaka – had at about 7.30pm disagreed on a yet-to-be-ascertained issue and attacked each other with knives.

Our correspondent gathered that before they could be separated by other residents, they had stabbed each other with the knives.

PUNCH Metro was told that while the victims writhed in pain, some neighbours attempted to rush them to a hospital, but they were discouraged as the men had lost a lot of blood.

The matter was thereafter reported at the Agbado Police...

By Tireni Adebayo
A 29-year-old businesswoman, Odor Oyinyechiwho, who allegedly poured hot water on her 14-year-old niece, Esther Ariserekwu, has been arraigned before a Surulere Chief Magistrates’ Court in Lagos.

The defendant was accused of assaulting her niece over a mistake the minor made, the News Agency of Nigeria reports.

A police prosecutor, Anthonia Osanyade, told the court that the accused committed the offence on September 5, 2016, on Adetola Street, Aguda, Surulere.

She said, “The accused poured hot water on her 14-year-old niece, Esther Ariserekwu, who has been with her for more than a year. The girl mistakenly poured dirty water into her pot of soup that was stored in the freezer.”
The prosecutor added that the offence contravened Section 243 of the Criminal Law of Lagos State, 2011.
The defendant, however, pleaded not guilty... 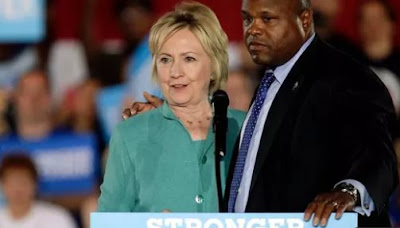 This man goes to every where with her, you can hardly see Hillary Clinton
anywhere without him and she just gave him a shout out after the media
started questioning his identity.
US Democratic Presidential candidate Hillary Clinton has openly
appreciated her US-based Nigerian doctor, Dr. Oladotun Okunola who
helped her recover from her recent health challenge.

Clinton, who had to leave a 9/11 memorial event in New York recently
after stumbling, took to her Twitter handle to express her gratitude to
Doctor Oladotun with the sweetest words:

“I want to give a big THANK YOU to my Doctor who travels everywhere with
me, Dr. Oladotun...