When Brazilian photographer, Vinicius Terra Nova, decided to
do a photo series he named, ‘Flores Raras’ (translated as Rare Flowers)
with these three sisters, magic was the only expected result.
The twins, Lara and Mara who have albinism slayed this shoot with their elder sister, Sheila.

It’s hard to get over how beautiful they look.

See them serving artsy vibes in this upside-down shot.

Be Inspired! Let’s tell you about the award winning female shoe maker, who is now creating employment opportunites for other Nigerian youths (photos)

By Tireni Adebayo
It's no news that Nigeria has one of the highest rates of unemployment in the world and this is majorly blamed on the Nigerian government for not providing enough job opportunities for its citizens.

However, some smart youths are not waiting on the government to provide them jobs, neither are they waiting on a who-knows-who to connect them with job opportunities.  They are thinking out of the box and making money with their skills.
One of such people who have gone out of their ways to create employment opportunities for themselves and consequently for others, is Michelle Ekure.
...
Click to Continue Reading
News 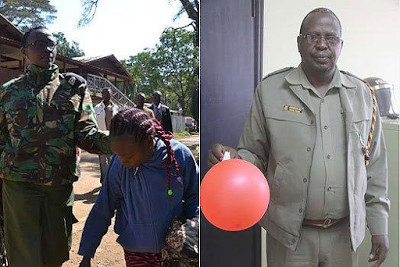 A desperate 21-year-old woman was caught with a balloon tucked in her clothes under the guise of being pregnant in order to steal a baby from a hospital.The suspect identified as Purity Kiritu was admitted at Othaya District Hospital, Kenya on Wednesday, August 24th, at about 7:30 pm after pretending she was in labour.

After preparing a labour room for delivery, the nurses were shocked to find a red inflated balloon neatly tucked under her clothes.

The hospital authorities informed the local police who came to the hospital and arrested the woman. Purity reportedly travelled from Nairobi to Murang’a four days ago to stay with her mother-in-law Ms. Josephine Wairimu where she would deliver.

Other reports say that she was under pressure from her husband to give him a child.

A police officer who spoke anonymously said the...
Click to Continue Reading
News

Yesterday [Aug. 25] celebrity designer Olakunbi Oyelesi of April by Kunbi had her traditional wedding to Lanre Tomori and one of the fab guests that attended was Reverend Chris Okotie’s rumored boo – Delphine Okoronkwo.

According to the reports, Okotie spoils her silly even to the extent of buying her a
N8 million brand new car. Other perks she allegedly gets include a
luxury apartment and privilege treats whenever she visits Okotie at his
Omodara, Awuse Estate, Opebi, Ikeja, Lagos home.

Anyway, see these recent beautiful photos of Delphine below: