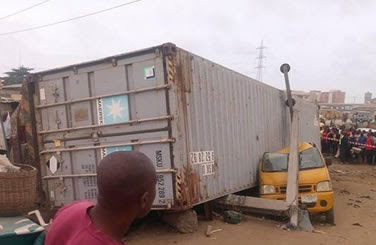 Such a tragedy on a Sallah day! About seven persons were killed and 12 others injured when a 40-foot container fell off a truck in the Alakija area on the Lagos-Badagry Expressway on Wednesday.It was learnt that at about 7.30am, the truck, with number plate KRD 526 XP, moved from its lane to another lane and rammed into a commercial bus after its brakes failed, Punch Metro reports.

In the process, the container the truck was carrying fell, killing seven people and injuring 12 others.

The incident happened at the Alakija bus stop and some commercial motorcycle riders were also trapped under the fallen container.

It was learnt that the minibus, with number plate EPE 972 XH, was crushed, while its passengers were trapped.

A large crowd of sympathisers were also observed trying to rescue the motorcycle riders and bus passengers trapped under the container.

A witness, Biodun Solaja, said  that three of the deceased were motorcycle riders.
He identified the two of them simply as Ganiyu and Mohammed.
He said, “The problem here is that motorcycle riders and bus drivers always block a part of the road in their search for passengers. Also, the road is in a bad condition and traffic is always heavy at the bus stop.
“This morning, the truck had wanted to manoeuvre its way when the container on it fell and crushed the passengers in the bus. It also crushed some okada riders at the junction. Many people were trapped under the container.
“Three okada riders died on the spot. Others had broken legs and arms. There was confusion at the bus stop for several hours.”
A policeman, who spoke on condition of anonymity, said the slow pace of construction work at the bus stop contributed to the accident.
He said, “Five persons died on the spot. As a result of the failed brakes, the driver lost control of the vehicle and rammed into the minibus. Apart from the five persons who were killed on the spot, several others were trapped under the container. Traffic officials were assisted by some sympathisers, who rushed several injured persons to different hospitals.
“Apart from the deaths and injuries, the container smashed about seven motorcycles and some electric poles in the area.”

An emergency official said that the casualties would have been more but for the interruption of power supply in the area.

“The electricity firm in Alakija was alerted to switch off power supply to the area to prevent electrocution because some electric poles were damaged. Heavy duty machines were used to remove the wreckage,” he added.

He said, “Investigations conducted by the agency’s Emergency Response Team at the scene of the incident revealed that the truck lost its brakes and rammed into the minibus. Thereafter, it also fell on okada riders at the bus stop. The agency’s ERT at Cappa, in conjunction with other agencies, was involved in the recovery operation.”

Akindele advised truck drivers to always conduct proper checks on their vehicles and drive within the approved speed limit. He urged motorcyclists to comply with the traffic laws of the state to forestall a recurrence.

She said, “The men of the FESTAC Police Division were on the ground to help in the evacuation. As of 4pm, we had five dead bodies. The identities of the dead are unknown.”

The Public Relations Officer, LASTMA, Mahmud Hassan, said the wreckage had been evacuated from the expressway.