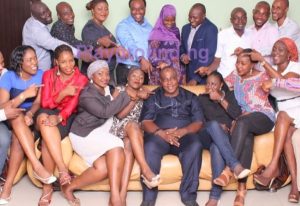 In a recent interview with Tade Afisat of Encomium, actor Adebayo Salami aka Oga Bello talked about the late Henrietta Kosoko , the achievements of his kids and more. Read excerpts below:

Recently, the industry lost one of its best actresses, Henrietta
Kosoko. How would you describe her and her exit from the industry?

Henrietta’s death was very shocking and painful. She will surely be
missed in the industry. Her death was a big blow to the industry. But
God knows best. She was a very good and respectful woman. She respected
her husband and all his friends. She was very obedient to call time. She
was very hardworking and she assisted her husband very well, as far as
the industry is concerned.

A lot of people believe death in the industry is as a result of lack
of welfare package for its stakeholders, especially actors because not
long ago, Arakangudu also passed on. What’s your reaction to this as one
of the most revered elders in the industry?

I disagree with anybody that said that. It’s not due to lack of
welfare as being bandied. Everybody has his or her time. And when it’s
time, nobody can do anything about it. For instance, Arakangudu died of
heart attack, it has nothing do with poverty, so also Henrietta’s death
wasn’t due to poverty. So, I don’t believe that.

As a devout Muslim who observes his daily five times prayers,
how has that not been affecting your career, especially when you’re on
location?

No, that has nothing to do with my career. It has not been affecting
it at all. A (Solat) prayer doesn’t take more than five minutes, and if
you’re on set, you can take permission from the director that you want
to pray. That would not affect the shoot in any way.

What of a situation where we may have a technical problem that may
last an hour or even more, won’t the shoot continue? So, it’s even
convenient for you as a Muslim unless you don’t want to observe your
prayers.

What’s the secret of your success as a theatre practitioner?

Nothing, except Allah. He has been with me since the beginning till
date and so shall He continue to be with me forever. He has been very
kind to me. I will forever be grateful to Him.

Few months back, your son, Femi Adebayo was appointed Special
Adviser on Art, Culture and Tourism to Kwara State governor, Abdufatah
Ahmed. How do you feel about that?

I am happy. It’s a thing of joy and part of the good things of life
that your children are progressing. Alhamdulillahi, and I will continue
to thank Allah for that. Allah loves who thanks Him always. So, I will
be eternally grateful to Him. I also thank our amiable Governor Ahmed
Abdulfatah for believing in my son. The governor believes in his ability
to project the culture of the state, that’s why he appointed Femi
Adebayo. I really thank the governor for the opportunity he gave him to
serve the state.

What advice do you have for Femi?

How old is Oga Bello now?

We understand you run a polygamous family, how many wives do you have?

I have wives (laughs).

Do you have plan to marry more?

Nothing like that anymore. My children can marry and be married now.
Some have been having babies. So, what more do I want from God other
than thanking Him.

How many children are you blessed with?

There is nothing to hide about that any more. I believe everybody
knows that Oga Bello has 18 children. And Alhamdulillahi, 16 of them are
graduates. And by the grace of Almighty Allah, the rest two will soon
become graduates as well.

How did you cope raising all of your children to that level, we mean as a theatre practitioner?

It’s God. I don’t have any other thing or person behind everything in
my life except Almighty Allah. And just like our father in the
industry, Adebayo Faleti always addresses me, Oga Bello, the man with
uncommon favour.

It’s favour from Almighty God Allah. That’s why I will continue to worship Him and be faithful to Him.

How many of your children are stepping into your shoes as a film maker?

I have four of them in the industry, they are Femi, Tope , Sodiq and Rilwan.

Did they join the industry on your advice?

No, I didn’t impose anything on them. It’s out of their passion for it. And I thank God, they’re all doing well.

No doubt, you are marvelously blessed by God, what more do you ask from Him?

I give thanks to Allah for being so kind to me. There is nothing more
I need from Him than to bless me the more, give me more strength and
long life.

Toke Makinwa is not here for guys with wack pickup lines

Popular Hausa actor to pay to have his scenes cut from controversial movie, “Fatal Arrogance”

‘Toilet infection does not exist’ – Popular Nigerian Doctor cries out