Dear kfbers, we trust you had a fantastic weekend!

Just before you go to bed, here are the major political and crime stories you missed today.

President Muhammadu Buhari has arrived the country after 14 days medical vacation  in the United Kingdom‎.
The Presidential Jet touched  down at exactly 5:33pm at the
Presidential wing of the Nnamdi Azikiwe International Airport, Abuja.
He stepped out of the plane at 5:42pm.
The President inspected the guards of honour in his honour and shook
hands with governors, members of federal executive ‎council, Service
Chiefs, Inspector General of Police and presidential aides that turned
up to welcome him.
When asked my newsmen how he was feeling, he replied, “You saw me
when I was going and you saw me when I came back, you can access the
situation yourself.
“I’m ok, you have seen me inspecting the guards of honour”.
When another journalist asked him in Hausa how he was feeling, he
said, “Do you want to wrestle me? You can see I am taller than you.”
‎The Special Adviser on Media and Publicity, Femi Adesina reiterated
his earlier position that the President did not go on medical vacation
but merely followed the advise of his physician and an ear, nose and
throat specialist.
He said the President is fit and will resume today. 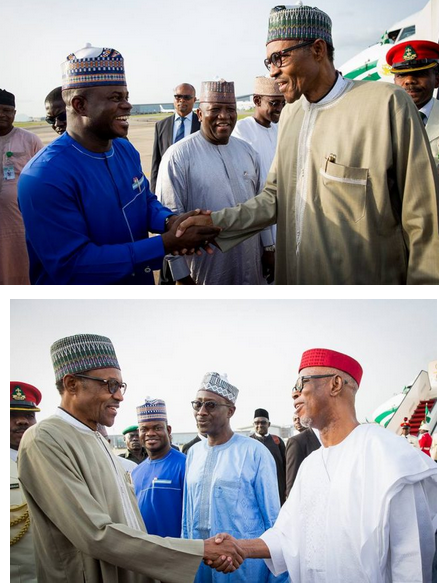 The Presidency is considering legal action against a private
lawyer, Mr. Nnamdi Nwokocha, who it said has by his press interview
prejudiced public opinion against President Mohammadu Buhari for an
alleged lack of school certificate and having declared the
President guilty on the pages of newspapers.
A Presidential Media Aide, Malam Garba Shehu, while reacting to
Nwokocha’s press interviews, in a statement explained that “it is unfair
for a lawyer who is a litigant to a case in court to go out of his way
to hijack the power of a Judge by declaring the President guilty of what
he is accused of.” According to Malam Shehu, “newspaper pages are not
alternative courts where a lawyer can declare anybody guilty of anything
when the court has not formally given a definitive judgment on an issue
before it.”

At least 15 people were killed in a night attack by gunmen at
a community in the southwestern state of Ogun, local sources said on
Saturday.
Baale Musa Ogundare, a traditional chief in Imushin community at
Ogijo area of Ogun State, told Xinhua armed men invaded the town late
Friday and shot indiscriminately at residents.
Local police have confirmed the incident but said findings were ongoing to further ascertain number of casualties.
Ogun State police spokesman Muyiwa Adejobi said about 100 attackers
brandishing various weapons reportedly stormed the community to wreak
havoc, adding the invaders likely came from a riverine area in the
state.
The police spokesman said investigation was underway to ascertain the motive of the attack.
Dele Momodu speaks on two people dying at birthday party he attended in UK over COVID-19

Speaker of the Federal House of Representatives,
Yakubu Dogara has challenged the United States of America to
substantiate the allega­tions against three Nigerian lawmak­ers accused
of sexual offences during their visit to the country few weeks ago.
The Speaker, while reacting to questions by Nigerians over the issue
on his twitter handle, speakerdogara, said no evidence had been received
on the allegation beyond the letter in which the lawmakers were accused
of committing the offences.
“As we speak, no evidence has been put forward other than the letter sent to my office and copied to many others,” he tweeted.
The Speaker who noted that an ac­cused person was presumed innocent
until proven guilty said, “social me­dia trial and conviction of the
mem­bers alleged to have committed the offence is taking up arms against
our laws.
“Together with the US Embassy in Nigeria, we will get to the bottom
of this matter and until then let’s not be judgmental,” he tweeted.
Three Nigerian lawmakers – Mr. Mohammed Garba-Gololo (Bauchi State);
Mr. Terse Gbillah (Benue State), and Mr. Samuel Ikon (Cross River State)
were accused of com­mitting sexual offences during a trip to the US to
participate in the Interna­tional Visitor Leadership Programme on Good
Governance organised by the US government.
The three lawmakers were mem­bers of a team of 10 lawmakers nominated
to attend the leadership programme, which took place in Cleveland,
Ohio, between April 7 and 13 this year.
US Ambassador to Nigeria, Mr. James Entwistle had in a letter dat­ed
June 9 to the Speaker, accused Mr.Garba Gololo of grabbing a hotel
worker and soliciting sex from her, while Mr. Mark Terseer Gbillah and
Samuel Ikon allegedly requested that hotel parking attendants assist
them to solicit prostitutes.
But the three lawmakers have consistently denied the allegation with
Mr. Ikon insisting his reported involvement is a case of mistaken
identity. The Speaker of the House of Representatives, Mr. Yakubu
Dog­ara, had last Thursday, directed the investigation of the three
members over the allegations.

A statement on her demise was released by the Head of the family, Pastor Kayode Adeyanju on Sunday in Lagos.
According to the statement, Mrs Odu died at a private hospital in Lagos on June 17, adding that she died of cancer.
“Until her death, she was a professor of clinical psychology at Ekiti State University (ESU).
She is survived by husband, Ayodeji Odu, immediate past member of the state House of Assembly, and two children.
It said burial arrangements would be announced later.

To convince Nigerians that he’s fully recuperated and strong, President
Muhammadu Buhari who arrived the country on Sunday after spending 10
days in London, challenged one of the State House reporters to a
wrestling bout.
President Buhari who said he is resuming work
stronger and more energetic jokingly challenged the reporter who asked
him about his state of health at the Nnamdi Azikiwe International
Airport, Abuja.
“You have seen me, you saw me when I was going, you can do the assessment by yourself.
“You
can see me inspecting the guards of honour, if you want to wrestle me,
you can do so, but you know I’m taller than you,’’ the president told
the reporter.
The president, clad in a light brown kaftan with a
cap to match, did not use the helicopter meant to transport him to the
presidential villa, but rather embarked on road journey to further prove
his fitness to doubting Thomases who feasted on his state of health
after extending his vacation by five more days last Thursday.
The
presidential plane carrying the president landed at the Presidential
Wing of the Nnamdi Azikiwe International Airport at about 5.32 p.m.
Members
of the Federal Executive Council, Service Chiefs, Chief of Staff to the
President, Abba Kyari and Inspector General of Police, Solomon Arase,
were among those who welcomed President Buhari at the airport.
Others at the airport were Gov. Abdulaziz Yari of Zamfara, Gov. Yahaya Bello of Kogi and other government functionaries.

Godwin
Obaseki has emerged the winner of the Edo state All Progressives
Congress governorship primary election held at Samuel Ogbemudia stadium,
Benin city on Saturday.
The election which ended in the early hours of this morning, was contested by 12 aspirants.
Obaseki’s election was announced by Governor Aminu Masari of Katsina State, who chaired the proceedings.
2,873 delegates from 192 wards of Edo state were accredited for the primary election.
Obaseki,
highly favoured to clinch victory, scored 1618 votes to emerge APC’s
flag bearer. His closest rival , Pius Odubu, the deputy governor,
scored 471 votes.
The breakdown of the results as given by the NTA which covered the election live:
Agbarha Justina 3
Chris Ogiemwonyi 137
Oserheimen Osunbor 10
Godwin Obaseki 1618
Kenneth Imansuangbon 247
Blessing Agbomhere 5
Charles Airhiavbere 11
Fredrick Amadasun 8
Emmanuel Arigbe-Osula 10
Austin Emuan 7
Peter Esele 8
The governorship election will take place in September.

No fewer than 19 persons lost their lives in an auto crash that occurred today along the Lagos-Ibadan expressway.
The accident occurred at about 1 p.m. around Fidiwo/Ajebo axis of the road.
Mr
Babatunde Akinbiyi, the Public Relations Officer of Ogun Traffic
Compliance and Enforcement Agency (TRACE)‎, confirmed the accident.
According
to him, the accident involved a tanker, laden with fuel, with plate
number, RAN 571 XA, and an 18-seater passenger bus ‎with registration
number LAGOS AGL 373 XR and an articulated vehicle marked AJG 40 XA.
Akinbiyi
explained that the fuel truck travelling towards Ibadan rammed into the
articulated vehicle conveying cement, while trying to overtake it at a
diversion, and collided with commercial bus heading towards Lagos.
He
said all the 19 occupants of the bus lost their lives on the spot,
adding that evacuation was ongoing at the time of filing this report.
The
evacuation, according to Akinbiyi, was done ‎with the combined teams of
TRACE, men of the Federal Road Safety Corps (FRSC) and the Nigeria
Police.

The Provincial Bishops visited one
of the sites, St Mary’s Parish, Nimbo, where the inhuman acts were
meted out on innocent souls at the early hours of that painful date. The
leader of the college of bishops was His Grace, Most Rev. Dr. Valerian
Maduka Okeke, the Archbishop and Metropolitan of Onitsha.

In modesty, the Metropolitan of Onitsha announced
their handsome donations of hundred bags of rice and money to the
people. It was the host Bishop Godfrey Igwebuike Onah who explained
further to the Nimbo people the magnanimous donation of the Onitsha
Provincial Catholic Bishops. He explained that the Bishops were donating
hundred bags of rice worth one million, five hundred naira (N1.5m) with
an accompanying eight million, five hundred naira (N8.5m).

The Ooni of Ife Oba Adeyeye Enitan Ogunwusi(Ojaja II) and his queen
Olori Wuraola, were hosted to a colorful Maryland Grand ball. The lavish
event saw lots of dignitaries, chiefs, Obas and others who gathered to
honour the monarch. See photos below; Chinese grandma roasts shrimps and others on a car boot

A
Chinese woman in the East China city of Jinan has turned the boot of a
car into a ‘carbecue’, using it incredibly to to cook shrimps, bacon,
eggs.
With temperature reaching 35 Celsius, the woman, a granny
thought the hot weather could have other uses. And according to the
Chinese news agency Zinhua, her ‘carbecue’ effort was a success!

She fries egg too
Done: shrimps and others

Fathers’ day special: 50 brides from around the world celebrate their dads with epic throwbacks of father/daughter wedding moments (photos, videos) 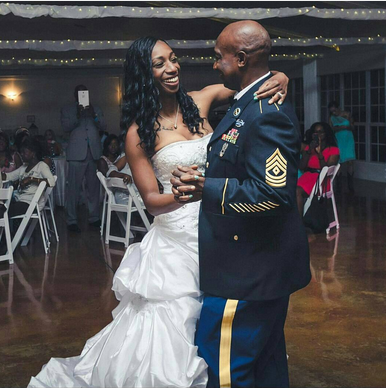 And to wrap our Father’s day features for today is this post on brides!

For the love of weddings, we now bring you some of the best father and daughter moment photos shared on instagram by brides from all over the world today.

Be prepared to cry, smile, aww and sigh. Some of the photos are just so emotional while some will get you laughing out loud, there are also some videos too.