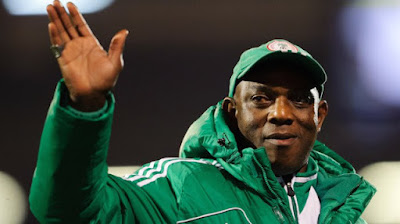 Since the death of  Stephen Keshi, there have been allegations of tussle of war between his family and some of his in-laws (Aburime family) over his final resting place, with the Aburimes insisting on burying him beside his wife, in their Benin home. But Keshi’s family want him buried in his ancestral home in Illah, Delta State.
Keshi’s extended family, Onyeogu Ukpologwu Illah of the Onyeogu Family Union Ukpologwu Illah, Delta State, has now stated, in categorical terms, that the remains of Stephen Okechukwu Keshi will be buried at his ancestral home in Illah, in line with his last wish before his demise.

In a letter issued yesterday, the Ogbe Onyeogu family said: “We wish to reiterate our demand as earlier stated by our representatives at the meeting of June 17 that our son be buried at his house in his hometown Ogbe Onyeogu Ukpologwu Illah in line with his last wish before his demise.

And this we must state is in conformity with Illah tradition the Ewu tradition and the chieftaincy institution, which he willingly subscribed to during his lifetime. We believe that an issue of this nature needs no further elaboration as it is customary in Nigeria that most persons, particularly high profile personalities are buried in their hometown, to do the otherwise may portend some consequences in future going by the Illah culture and tradition.”

Let Khemmy handle your personal shopping from now on!

Many feared dead as fuel tanker explodes on Lagos-Ibadan expressway

Vulnerability is an attribute of the strong – Timi Dakolo echoes