Nollywood actress, Fathia Balogun has just shaved
off ALL her hair for her new role! Talk about being committed. This is
the second time that the movie producer/actress will be shaving off her
locks for a role.

When asked by Naij
her reason for going bald hair for the second time, the actress made it
known that she is a trained actress who does what she has to, to
interpret a role.

When I was approached by the director that my role will
require me to scrape off my hair totally, I did not think about it twice
before I agreed to playing the role since it’s what I have done before.
I am a trained actor who can interpret roles and that I am doing on
this project too.

See all the photos below:

Other actresses that have shaved their hair for movie role

Adaora Ukoh The big , bold and beautiful queen had to shave off her hair in a movie titled ‘’Thy Kingdom come ‘’ where she played the role of a woman who became a widow . It was gathered that she was payed N2 million to play the role . Interestingly , she still carries a low cut till date . Her fans confess how much they love her bald look . She sure looks gorgeous with it .

Uche Jombo : She went bald in the movie ‘’ Holding up ‘’ , which she produced with Emem Isong last year , where she played the role of a cancer-ill mother . Uche rocks her shaved head well coupled with her smile which she always have on .

Chika Ike : The actress was paid N5 million to shave her hair in a movie titled ‘’ Moment of tears ‘’ she is the first ever Nollywood damsel to declare amount received as compensation . Her fans say she looks better without the shaved hair .

Mercy Johnson : This Nollywood star actress is a delight to watch any day on screen . She went bald sometime ago when she featured in a movie ‘’Hearth of a widow ‘’ shot in Enugu . She was reportedly paid handsomely to shave her hair . Her fans and critics say she doesn’t look too good with her shaved hair .

Crystal Okoye: Crystal Okoye is a rookie but one with a big dream. Within a year of coming into the industry she has starred in over 20 films with more than five of them as the lead character. She joined the ‘Hairless Queens’ with her quest appearance in ‘Widows Cot’.

Oge Okoye : she went bald in a movie which required the bald effect to portray the character of a widow . It was rumored that the offer was so good for the actress to refuse . Fans say she looks sick with her head shaved .

Halima Abubakar : She surprised everyone when she buzzed her hair off to create awareness for cancer . And she looks great with the shaved hair . While her fans says she looks good on it , others also reacted negatively .

Ebube Nwagbo : She recently shaved her hair in the movie ‘’ Widow’s cot ‘’ alongside Angela Okorie and Chitta Agwu . She wrote it on twitter that she did it for love of her job and money .

Queen Nwokoye : The trio of Oge Okoye , Queen Nwokoye and Ghananian actress Rukky Mushud , were paid some millions of naira to have their hairs shaved to the skin in a movie titled ‘’ The Three Widows ‘’ .

Judging by reactions from fans , she doesn’t look good with her shaved hair . Nuella Njubigbo : She was relieved of her lush hair , a requirement for the lead role she played in a movie . It was gathered that she was paid handsomely for the role . As fans commended her for the great look .

Eve Esin : The Akwa Ibom state born fast rising actress , has joined the many actresses who have shaved their hair for movie roles . In the movie titled ‘’ Girls on fire ‘’ , she was made to shave her hair when her friend , while fighting with her because she slept with her boyfriend , hit her on the head with bottle .

Chacha Eke : She  shaved her hair for the movie ‘’ Criminal Widow’’, Tessy Oraguwa : She has taken a step further in her acting career . She is working on a movie and had her hair shaved completely for the role . According to a close source , she was rewarded handsomely to get her hair shaved for the role of a widow in the new movie . 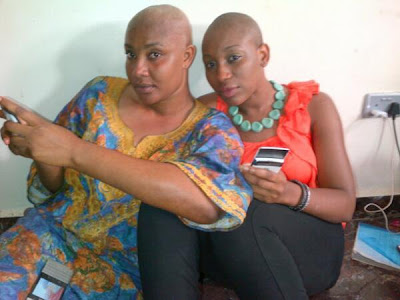 Anita Joseph : She didn’t shave her hair for a movie role , but for style . Judging by fans reaction , she looks hotter with her shaved hair than with weaves .

Esther Audu : She’s a perfect description of an African beauty . Esther is one of the ladies who has been rocking her shaved hair for a while now . She didn’t shave her hair for a movie role , but just try out a different look and everyone think she looks great with it .

Chita Agwu : The beautiful Nollywood actress , also shaved her hair for the movie ‘’ Widows cot ‘’ . When asked how much she was paid , she simply said ‘’They tried ‘’

Dan Foster now co-hosts The Classic Morning Show from 6am – 11am every week day.
His sojourn in the Nigerian broadcast industry began when
he relocated to Nigeria in 2000 and immediately joined Cool FM where he
worked for nine years.

He left in 2009 to join Erastus Akingbola’s
Inspiration FM and reportedly became the highest paid on air
personality, receiving a salary of N1.6m per month. Foster added
marketing and management to his new role.
In June 2014, he left Inspiration FM to join newly launched Lagos based radio station City FM 105.1.

His move to Classic FM makes it his 4th radio job in 16 years since he arrived Nigerian in 2000.