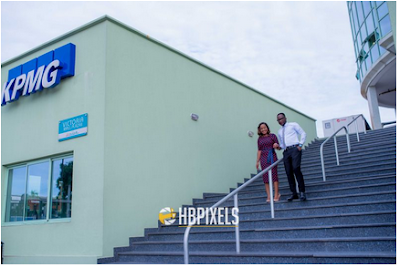 Who says Office romance isn’t worth it? Wait until you read Damilola and Tobi’s story.

The couple met at KPMG where they worked.

Read their love story and view their prewedding album below:

How we met (by the bride)

Rewind to November, 2012 when I joined the organization where I
currently work. About my second day in the firm as a first year Auditor,
I was given a task I had no clue about with very little or close to
nothing guide but was asked to speak with a couple of people (seniors)
within the office (pool).

As a newbie, I met with the senior colleagues as directed but the
explanation/ solutions proffered were very “high-level”, and some were
very quick to tell me – I will send it to you via email in a bait to
discharge me so I can allow them focus on their numerous “to-do’s”,
trust me I couldn’t blame them and no one would because it was that very
peak & busy period of the year with tight deadlines, pressured
environment and a billion and one things demanding ones attention.
While I continued my search to get my assigned task done, I sighted
Tobi (a third year Auditor) for the first time in a corner in the pool
busy with his work like others but at the same time having discussions
with another senior colleague, difficult to tell what the discussion was
about, but it had to be work related… Immediately, I thought to myself
“this might be the answer to your search”, I braced up carried my laptop
towards him,  sought permission from the person he was discussing with,
and without waiting to get his “go-ahead response” I went on with Tobi
about my task, what I had done so far, leverages/explanation I had
gotten from people. Immediately, Tobi asked me to drag a seat, he showed
me, explained and taught me.

Lo & behold that was the end to my
search and I delivered on my task asap.The next day, at work he came in
to the pool, I said HI to him and he winked , yes he did that “in a very professional environment” can you imagine…, i thought to myself “what’s wrong with this one?”
To cut this long epistle short, we became friends, very close
colleagues, hung out couple of times outside work premises, we started
going home together and he will pick me from home to work. Goes  out of
his way to drop me at Surulere everyday from VI before heading to
Gbagada and same routine in the morning Gbagada – Surulere – VI (you can
tell these are extreme ends to the Island). All of these went on &
on with us just being friends.

Tobi filled with lot of surprises, one afternoon, anonymously sent a
really lovely cake to the office to me with “JUST BECAUSE it’s THURSDAY…
I was truly surprised but I confronted him and he admitted he was d
one. He asked that we take our friendship to another level in May 2013
and start dating of course I loved it totally and was ready to continue
the ride. Shortly after we made it officially, he resigned and joined
another firm.
Fast forward to 16 October 2015 my birthday – the proposal and
another mega surprise awaited me and I love every bit of it. Was super
excited when I saw the blue box sitting pretty in ice bucket of
champagne with my Sweetheart on one kneels just murmuring things I
couldn’t hear….

How we met (by the groom)
Hmm. I sigh because my mind has been flooded with emotions and thoughts that I cannot explain.
I remember vividly the day I saw my Dami Bamz at my former place of work in November 2012.
I was prepping for a meeting with a client and was in d middle of
finalizing a presentation when I saw a light skinned, pretty damsel with
suave and plenty panache walk past me. Of course, as a ‘bad sharp guy’ I
had to look and mehn all I could say in my mind was ‘damn, she’s hot’.

I managed to say hi to her then and she responded with the usual ‘chicky’ hello.
A few days later, I was in the middle of a discussion with a colleague
when I saw ‘the babe’ again approach me. Of course, I abandoned the
discussion with immediate alacrity and gave her my full attention.
Apparently, she needed some guidance on a task a manager had given her
and had approached several people who just explained briefly to her
without confirming whether she understood what was expected of her. As a
guy with ‘intentions’, I immediately exploited the situation. I took my
time to demonstrate what was expected of her and made sure she
understood and could carry out the task without further guidance.

Afterwards, we became friends. Took her out a few times to ‘test the
waters’. (una sabi as e dey go) and I was very impressed not only with
her physical beauty but also with the depth of her reasoning, a way of
analyzing issues and her inner strength and character.

EPL: Arsenal Goalkeeper Petr Cech to retire at the end of the season

I believe one of the game changers was in January 2013 when I thought of
a way to wow her. (you know things guys do to show say u better pass
dem other boiz).  I decided to send her a cake (of course it wasn’t her
birthday) with an inscription ‘JUST BECAUSE ITS THURSDAY’.  I made
arrangements for the cake to be delivered and that she be told that the
sender was anonymous. Immediately she entered the office with the cake,
she was just brimming and blushing all over. That confirmed that she was
indeed wowed. Of course, the whole office was upside down as everybody
was interested in knowing who the sender was. (meanwhile me just siddon
for corner dey form not knowing). During all of this two managers
cornered her and requested that she must tell them the person who sent
the cake. She couldn’t proffer an answer then as she didn’t know who it
was. When I eventually told her I did sent the cake, I could see that I
had jumped the barricade around her heart and was getting closer to
stealing her heart. Hence the pressure to be my babe started.

I had to do plenty things to impress her between January and May 2013
when she gree o. One was to wake up at 5am in the morning, leave my
house in Gbagada by 5:30am, head to Surulere to pick her up and then go
to work together. Then when we leave work, drop her back home in
Surulere before going home myself. (I don suffer no be small). But
really, while it was indeed stressful, I did not feel the pains much as
every second spent with her was worth the effort and the long drive. I
remember the day she finally agreed to be my bae, 26th May 2013
precisely. We had to travel to Ikenne in the morning and was on our way
back when I asked her to be my girlfriend as I saw the future with her.
(dem boiz sabi d flow na). I remember she kept quiet for a while and was
all smiles for several minutes. Through the smiles, I could see that I
had hit the jackpot.  She said YES.
That marked the beginning of a journey which we are still on. I won’t
bore you with the plenty things that happened as we started our love
journey but like every other relationships we had our good and bad
times.  As people say, plenty water don pass the bridge. Fast forward to
16th October 2015.
I made up my mind that this pretty damsel was going to be my wife
sometimes in December 2014 and I bought the engagement ring in February
2015 but couldn’t propose to her as I couldn’t find an appropriate time
to do it. ( I was already wondering whether the ring no go turn ‘Lord of
the rings’ for my own hand sef’).

16th October happened to be her
birthday and I remember she had mentioned it in passing once that she
wasn’t keen on a birthday proposal. But me wey don dey find how I go
take run pee…. Omo I no send o. She decided to have a party to celebrate
which was perfect for me. I already informed a few of her friends of my
plans and I also gathered my ‘ride or die niggas’ to come ginger the
boy o. Of course, my guys made some arrangements and all to spice up the
whole thing and then the time came. On a ghen ghen something. Precisely
at 1:26am on the 17th of October 2015, I walked over to her with the
ring in a bucket of champagne and went down on one of my knees. Mehn,
the expression on her face was priceless. Dami turned 360 degrees at
least twice with her mouth opened like really………. She extended her left
hand and I slipped the ring into her finger. Chai. #idondidit#. I will
always cherish that moment all my life.

My Dami Bamz, soon to be Dami Maks; I love you dearly with everything I
have and will ever have. I look forward to the future with renewed hope
and enthusiasm that with you by my side, the sky is just our beginning.
You are my jewel of inestimable value and I will cherish you for the
rest of my days. You are indeed a God sent and a virtuous woman other
women should emulate. You are not perfect but you are perfect for me. I
love you so much not just for your strengths but also for your
weaknesses. I can’t wait to call you my wife and ‘temi nikan sho sho’
come the 20th of August 2016. I love you my MIA DOLCENZA.

Shoot us a mail @ [email protected]