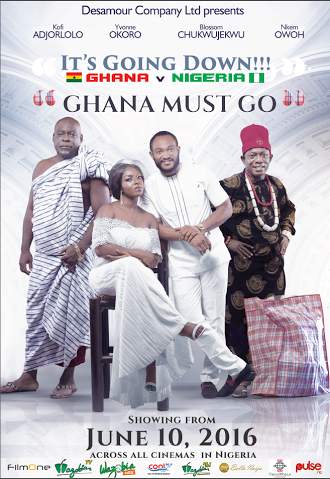 Synopsis: The
comedy revolves around two young lovers who are of Nigerian and
Ghanaian origin. Ama, a London-based Ghanaian woman, brings her Nigerian
boyfriend home to meet her parents much to the displeasure of her
wealthy father.

Verdict: This movie is stupid as hell! But freakishly
funny. If you are going to see this, make sure to leave your common
sense at home; because you will find no logic here, only an outlandish,
ridiculous and shameless offering of comedy. So if it’s laughter you are
looking for, then I assure you, you won’t find it better served this
weekend than in ‘Ghana Must Go’. You will laugh and you will laugh hard!
Go for it!

‘Ghana Must Go’ is most definitely a triumph! A Nollywood and Ghollywood
triumph! It parades some very solid acting; look out especially
for Kofi Adjorlolo. The dialogue is mostly superb and the production is
top notch; you can easily see throughout, that the makers went the extra
mile. And though they didn’t pull off a perfect, they definitely get
top marks for effort. And Nkem Owoh was at his best; he shines through, remaining true to his art… Ridiculous and funny as ever. Nkem Owoh is madt! And madt, is good!

Recommended. It’s worth seeing at the cinema. But remember, only if you
are willing to turn your brain off for the duration and let your Heart
do all the work.

Living In Bondage - Breaking Free: Best enjoyed by the Igbos


The movie’s major strength for me is its characters and how much life
they bring to it. If you are familiar with Nkem Owoh, aka Osufia of the
Osuofia in London fame and other movies, you will
understand when I say that the movie is laced with witty comebacks and
explosive interpretation no one actor of this age has been able to
recreate.

Who hears expressions like “In a newly established market,
finding a meat stand is always difficult for the vulture” and does not
do a double take? I kinda got the feeling that he returned from his
hiatus to show the new generation actors how it is done: unforced
humour, fluid interpretation that creates a very sanguine feeling and
irrepressible laughter. In this movie, he plays the role of Ama’s
father-in-law and Blossom’s father, a hunter back in his village and an
antidote to Ama’s father’s bitterness and hatred of Nigerians in the
movie.

I doubt that I have seen IK Ogbonna in any movie prior to his
performance in this one. Dude is a clown for want of a better word and
his interpretation is one of those that make this flick memorable for
me. Younger brother to Ama, also called Kwabenana or Kwabs for short, he
is almost the average younger sibling in most homes except that he is a
“clown” in the movie in the way he talked, reasoned, the way the other
characters perceived him and how he interacted with the rest of his
family.

Kofi Adjorlolo is the typical African father, who is very protective
of his daughter, and often has ideas as to who the ideal suitor for her
daughter should be. Most times, taking into consideration their tribes
or nationality. The only difference is that Kofi has a gun for his
‘protective’ duty (being a retired soldier) where others probably have
machetes.

Blossom’s character is not as strong for me but it was fair enough. I
found his moments of indecision a tad too hard to swallow. He gets
thrown out by his father-in-law in Ghana and he, a grown man supposedly
from Nigeria, calls for his father, who is in a village in Nigeria
hunting antelopes and rabbits to come for him. How does that happen?
Ama, besides being a bad cook in the movie is a good actress who holds
our attention for the entire length of the movie as lead.
Helen Paul makes an appearance in this movie and honestly, it is one
of the downsides of it for me. I am still trying to understanding the
need and relevance of her character which I find redundant in the movie.
It can’t be to introduce the element of humour because there was
already a lot of it going on with Nkem Owoh around, Ama’s aunty and even
IK Ogbonna. So Helen Paul’s inclusion, for me, titled towards overkill
especially as there is no significant thematic relevance for her
character in the movie. The aesthetics of it all as well does not nicely
come together for me.

I don’t appreciate how Ghana Must Go tries to channel the Osuofia in
London approach. I get it if, in London, Nkem Owoh/Osuofia is made to
look “bush” or razz because, in terms of development, London outranks
Nigeria. But in Ghana? How? Even with Nigeria’s present level of
development how better is Ghana compared to Nigeria that a person
visiting Ghana from Nigeria is portrayed as very local and uncivilised
in the light of the development in Ghana. Please don’t mention
electricity, because we have generators here and so are not in darkness.

While this may be overlooked in some ways, seeing that Nkem Owoh is
also characterised as a local village hunter, while Ama’s family is
upscale bourgeoisie Ghana, I liken it more as an attempt to take control
of the narrative and put Ghana in the good light. This, in turn, casts
doubts on the objectivity of the movie as well.  I stand to be
corrected.
However in all, this was a good movie; very entertaining and
enlightening even with its candid bites into history. So pause from
worrying about the flailing economy and notorious power failure of the
recent days and go calm your mind. Go see Ghana Must Go; laugh and breathe out!


They robbed the occupants of 8 out of the 9 rooms in the building,
carting away laptops, mobile phones, ATM Cards, cash, clothes,
electronics and other valuable items.

Occupants of the lodge, mostly female students of the University of
Port Harcourt, who just returned after long closure of the institution
recounted their ordeal to DAILY POST.

One of the students said “I was in my room when one of neighbours
sent me a text message that there are some people in the compound, but
she doesn’t...