So today, the Edo State House of Assembly chamber was thorn apart after
some 16 lawmakers impeached the Speaker of the House and his deputy. It was a free for all fight.Lawmakers accused the speaker, Victor Edobor, of incompetence and
arrogance. He was sacked by 16 members of the house. But the speaker
stormed the venue with his men and fight broke out…

The woman elected as speaker held tight to the chair as the impeached speaker tried to drag her out. Lol!

Following Tiwa Savage‘s explosive interview last Friday, her estranged husband and former manager Tee Billz has maintained silence…not a word has been heard from him.
Well, new reports say his close friends are working to help him recuperate and rehabilitate following his social media rant, suicide attempt and Tiwa’s subsequent interview where she claimed he’s a cocaine user, a cheater, who steals from her and in serious debt of N45 million.

Following his suicide attempt last Thursday Billz crashed at singer Banky W’s Lekki home. His close friends which include promoter Paul Okoye have now moved him to a flat in 1004 estate, Victoria Island.

Some of the close friends said to be supporting TJ through this low point in his life are:
Entertainment promoter – Paul Okoye, Psquare’s Peter Okoye, Banky W, Cecil Hammond... 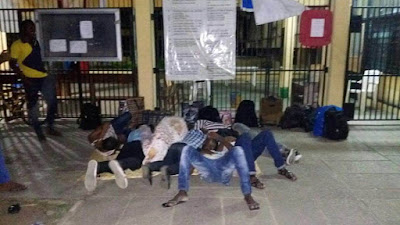 The students of the University of Lagos who failed to complete their re-absorption undertaking, were forced to sleep outside their hostels overnight on Tuesday, following the indefinite strike that was called off by the school's management. The officials of the hostels were said to have vehemently refused them access into the hostel rooms and also squatting with others.

You recall that during the heat of the nationwide fuel scarcity sometimes last month, the management of the University of Lagos, shut down activities and asked that students resident on campus should evacuate the school's premises indefinitely after the student's protest over insufficient water and power supply.