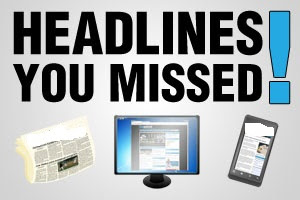 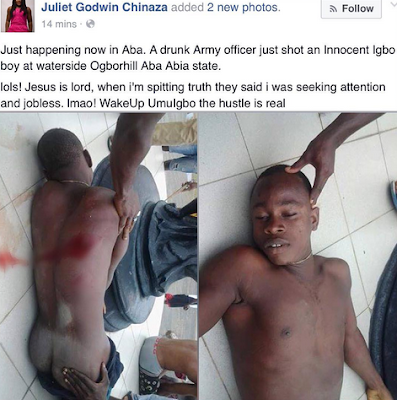 Not less than 14 Hausas and about 2 Igbos have been killed in Aba, Abia state as a result of a clash in the Ogbor Hill area.
An eyewitness disclosed to YNaija on Thursday evening, that the root
cause of the clash was a debt owed to a Hausa trader by an Igbo butcher.
The lender was said to have called a soldier, also Hausa, to help him retrieve his money from the debtor.
In the process of trying to get the money from the Igbo butcher, the
soldier was reported to have shot him in the back and he died on the
spot.
The eyewitness further revealed that the soldier tried to take the
body away but a gathered mob prevented him from carrying out his escape.
This led to a protest by butchers in Aba, who got violent and went on
a killing spree of Hausa shoemakers and any Hausa person in sight.
The butchers took their protest to an area called 7up junction in
Ogbor Hill where they mounted barricades and constituted further
violence.
Security agencies – soldiers and police – have now been drafted to the area, where order has momentarily returned to.

Niger Delta militants attack Chevron oil platform
The Nigeria Defence authorities have confirmed an attack on a major
platform of Chevron Nigeria Limited by suspected militants of the Niger Delta.
Brig. Gen. Rabe Abubakar, the Acting
Director, Defence Information, said that the incident unfortunately occurred in
the high sea on Wednesday night.
In his words, “Actually, it is true. It is unfortunate that this type of
thing happened. It happened far into the high sea so efforts are being
intensified to track the perpetrators.”
Navy Spokesman, Ezekobe, explained
that the attack took place some four miles off the Escravos River.
He said, “Well, it is true, the
incident happened four nautical miles off the Escravos Bar. The platform was
partly damaged, it is a collection point for crude oil and gas to the main
facility in the area, so it has affected production.
“Our Forward Operation Base in the
area has sent vessels to protect the oil facilities in the area and the one
that was attacked at the Forcados.”
A group which called itself the Niger
Delta Avengers claimed responsibility for the attack saying its Team six
carried out the attack.

The latest FIFA/Coca-Cola World Ranking leaves Nigeria at the 67th spot in the world ranking and 14thin Africa, while Nigeria ranked 37
globally in the women’s ranking, but claimed the top stop in Africa followed,
by Cameroon (46) and Ghana (48).
With no matches played in April there
were few changes in the ranking with Argentina retaining the top spot followed
by Belgium and Chile.
Algeria, which ranked 33 in the world, claimed the top spot in Africa
followed by Cote d’Ivoire (34) and Ghana (38)
The ranking sees the top 50 teams
retaining their position while the regional composition of the teams remained
unaffected.
Laos recorded the biggest gain in
ranking, moving up by six ranks to 176, while Kuwait suffered the biggest drop,
falling by 14 ranks to the 140th spot.
World Cup winners USA topped the
women’s ranking with Germany and France claiming the second and third spots.

NASS on a week break

Senate President, Bukola Saraki, on Thursday today,  adjourned plenary for one week to enable
members of the People’s Democratic Party, in the upper chamber of the legislature,
to attend the party’s ongoing congresses.
The senate did not consider any motion
or bill as the number of senators present during the days plenary was not up to
the required number to form a quorum, which is one-third or 37 of them.
However, the senators present were not up to 37, so the senate president
therefore adjourned plenary to Thursday May 12.

2
million Nigerian farmers to get N500b — Minister of Industry, Trade and
Investment

Over two million traders, farmers and artisans would receive
micro-credit under the N500 billion social investment programme in  2016
budget , according  to  Minister of Industry, Trade and Investment,
Dr Okechukwu Enelamah, who  also  said that the assistance would be
given through a fund to be managed by the Bank of Industry (BOI), an agency of
the ministry.
Enelamah  who stated this on
Thursday  during ongoing sectoral debate on the diversification of the
economy at the House of Representatives told  lawmakers that the lingering
oil price crisis was an opportunity for the country to develop a diversified
economy based on exports and strong domestic manufacturing sector.
He said that government’s plans in
this regard were based on four pillars, one of which is creation of an enabling
environment for industry, trade and investment in Nigeria.
To this end, he said that the ministry
was working to position itself as an enabler and facilitator of business and
investment in the country.

The Minister of Agriculture, Chief
Audu Ogbeh, has suggested the importation and cultivation of good and
nutritious grass as part of the effort to end the frequent clashes between herdsmen
and farmers in the country and to help to breed healthy cows  that have
capacity to produce quality milk.
Ogbeh, who  stated  this in Lagos on Thursday  during
interactive session with the Newspapers Proprietors Association of Nigeria
(NPAN) also  said that Nigerian cows, which should be among the best breed
in the world, lacked the capacity to produce quality milk because they wandered
about.
In his words, “The largest ranch in
the world, dairy farm in the world is in Saudi Arabia; 135,000 cows in one
farm, but they are the most comfortable cows on planet earth, they live in
air-conditioned tents.
“They eat and they produce milk; they
give 40 litres of milk per day. We do, sometimes, half a litre of the milk.
That’s why Saudi milk is all over the gulf.
“Where do they get their grass? They
get their grass from the U.S.; import alfalfa grass from the U.S. and from
Sudan.
“Our cows are wandering and the
herdsmen are at war with farmers; a crisis we must bring to an end as quickly
as possible. And the solution is: grow grass.
“I have said it before, but I came up
against a barrage of assaults. ‘Is it grass now? Na grass you go import?’ They
said.
“With all due apologies to the
commentators, they do not know as much as I do about this business of cattle; I
keep some.
“There is no way you can keep cows
without good grass to feed them and the grass must have a minimum of 18 per
cent protein, trace elements and amino acids, then the cow will give you good
meat,’’ he said.
Witness fouls Ohakim’s claims, as prosecution closes case
A witness in the ongoing trial of
former governor of Imo State, Ikedi Ohakim, on Thursday, told Justice Adeniyi
Ademola of a Federal High Court, Abuja that the former governor lied when he
told investigators that he earned dollars from a transaction between them.
The witness, a Port -Hacourt-based
businessman, Scott Tommey, admitted buying Ohakim’s land in Maitama, Abuja, in
2012, but insisted that he made payment for the purchase through bank transfer.
Ohakim is
being prosecuted by the Economic and Financial Crimes Commission (EFCC) on a
three-count charge bordering on money laundering and false asset declaration.
Tommey said: “It is totally
false that he (the defendant) claimed that I paid him in US dollars. I paid
through fund transfer. I never paid in cash. It was through funds transfer.”
He
further said that, “he had a property in Maitama, which was up for sale, and I
was in search of a property to develop. I had an agent, who got the property,
which was the former governor’s land.
“The agent
introduced me to him sometime in 2012. We bidded and there was need to meet
with the owner of the property.”
“We agreed to
a total cost of N250 million, which was paid to him through my bank. I paid for
the property through bank transfer From Sterling to Fidelity Bank. I paid in
naira.”
READ
How Doctor, Urenna Iroegbu died in accident 48 hours after completing NYSC 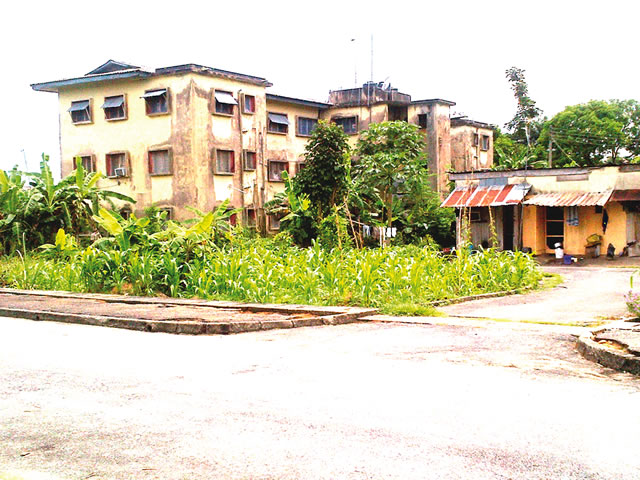 Kidnappers have demanded N60m from
families of three persons abducted on Monday from the staff quarters of
the University of Calabar in Calabar, Cross River State.
Gunmen had on Monday stormed the
institution’s staff quarters and abducted the wife of a lecturer, Mrs.
Nancy Ndifon, alongside her daughter, Oyebah Ndifon, and in the process
of escaping, picked up another medical personnel, Dr. David Iniama,
before escaping through the creeks.
The Monday incident was not the first time that gunmen would be invading the university’s staff quarters.
Armed men had in April invaded the
quarters and ransacked the residence of a lecturer and medical
consultant, Dr Wilfred Ndifon, whose wife and daughter are victims of
the latest attack.
PUNCH Metro learnt on Thursday
that while Ndifon and Iniama are medical personnel working with the
University of Calabar Teaching Hospital, the daughter of the Ndifons was
said to be a student of the institution.
Worried by the development, Chairman of the state branch of the Nigeria Medical Association, Dr Offiong Ikpeme, who spoke with PUNCH Metro
shortly after an emergency meeting with other affiliates medical bodies
of the UCTH, said the kidnappers had demanded N60m attack for the
abductees.
She noted that health workers and
university workers had become targets of armed attack, adding that their
lives were no longer safe.
Ikpeme noted that many staff members of
the UCTH had received telephone calls and test messages from anonymous
numbers telling them to be prepared to be victims of future attacks.
She said, “At about 9pm on Monday (May
2) bandits kidnapped the wife and daughter of a medical consultant of
the UCTH and lecturer of UNICAL. The same bandits also whisked a worker
of the UCTH, Dr David Iniama.
“While Mrs. Ndifon and her daughter were
abducted from their house in the staff quarters, Dr. Iniama was picked
up as he was about entering his apartment. We have been informed that Dr
Iniama might be suffering a gun injury at the moment.
“So far, we learnt that demands have
been made to their families. We learnt they have demanded N30m for Mrs.
Ndifon and her daughter, while N30m was demanded for Dr Iniama,
totalling N60m. The police are aware of the development.
“It is unfortunate that people in the
health sector have become targets. Calabar is no longer safe for us.
Three other doctors have received threat calls and messages that they
will be the next targets. This is alarming.”
READ
Unknown gunmen assassinate popular herbal medicines manufacturer, 'Oko Oloyun'
Tags
#Major Headlines You Missed Today Nigeria news today

Have you seen this video of Nollywood’s Lala Akindoju, Kehinde Balogun and Adesua Etomi singing a yoruba song?

Nigerian Newspapers: Top headlines to keep up with this Wednesday | 15th May, 2019