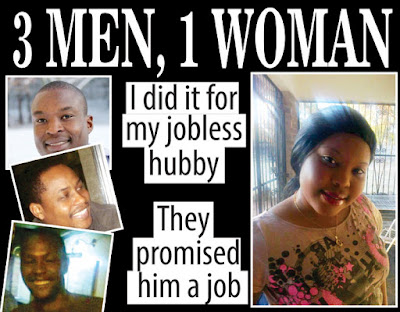 A Harare man, Mehluli Dube is in a dilemma following a recent confession by his 24 year old wife!

Charlene Dzokese (24) confessed to bedding two men in a bid to help him secure a job – she cheated with a Coalition boss, Phillan Zamchiya and her husband’s best friend Beloved Chiweshe.

“Indeed I cheated on Mehluli not that I wanted to
but I had no choice, we have been suffering for years now and we have a
minor to fend for. I know how hard life can be because at some point I
once stayed in the streets and I am an orphan, I only want the best for
my son.


“So when his best friend
presented me that he would get my husband a job and his former boss
Zamchiya promised to get him something at Crisis in Zimbabwe Coalition
where he is the director, I jumped at it. Chiweshe knew that I was going out with Zamchiya and we would arrange
to meet in town and at times he would come to our home in Zimre Park
when Mehluli was away,” Dzokese said.

Mehluli Dube discovered the love affair last Wednesday when he rummaged through his wife’s WhatsApp chats.

These affairs had been running concurrently since last year November.

Dzokese and Mehluli have been married for three years and Mehluli says his wife was a victim of circumstances and he will make sure that his colleagues will pay for what they did.


“I have known Chiweshe since 2003, he has been my best friend since then and what he did really broke me down.


“I have been Zamchiya’s right hand man since last year when he took over directorship at Crisis in Zimbabwe Coalition.