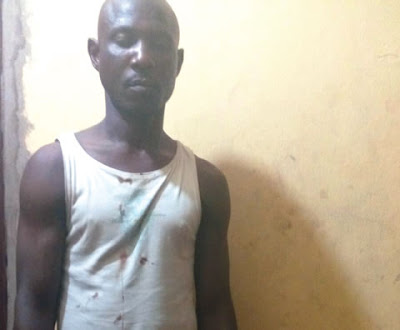 This shameless school
teacher, Benedict Ekpenyong, recently locked
up a female pupil in his room at Ogunfunmi Street, Akobi
Crescent in the Surulere area of Lagos and attempted to rape her.
The
14-year-old pupil, identified only as Blessing, had been lured by
Ekpenyong to his apartment at about 12pm, after which he bolted the door
to the suspicion of his neighbours, Punch reports .
It was learnt that Ekpenyong, who was a
teacher in Akintan Grammar School on Akintan Street, Surulere, and
Blessing, also a pupil of the school, were in the room for a few minutes
before a mob surrounded the house and tried to force the teacher’s door
open.
When the
door was forced open, the mob observed that Ekpenyong had allegedly
attempted to have sex with the pupil, and they began to beat him.
The teacher was reportedly beaten by the mob before he and the pupil were dragged to the Alakara Police Division at about 1pm.
A resident of the street, said the police
had visited the teacher’s house to collect exhibits, adding that the
neighbours became angry because Ekpenyong allegedly had a habit of
bringing schoolgirls and locking them up in his room during school
hours.
He said,

“I do not stay on Ogunfunmi
Street but I knew when the mob went to the house. For several minutes,
people gathered in front of the teacher’s room and asked him to open the
door but he refused. Then, they forced it open.“When they did, they found evidence that
Ekpenyong might have attempted to rape the girl as the pupil was not
the first person that would be brought to the teacher’s room. So, they
began to beat him up. It was a major scene on the street.”

Everybody thinks state governors are thieves, but we have one of the most difficult jobs ever — Governor El-Rufai