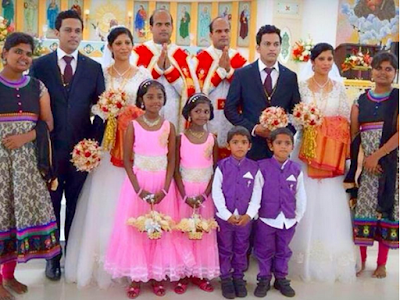 The 32-year-old men, who had been inseparable
all through school, university and even went on to work in the company,
decided as teenagers that they could only marry identical twins. They
set about finding identical twins and it took them five years to find
their wives, both nurses. The wives were also hunting for twin grooms. “When
we met Reena and Reema, we knew it was them we were looking for all
this while. Fortunately, they also had the similar feeling after meeting
us,” Dilraj told the Mail Online
“We had to keep searching the suitable
boys for three years in a row. When we saw Dilraj and Dinker we nodded
yes to each other. It was a wonderful experience.” Reina said. There were a total of seven sets of twins at the wedding ceremony. Everybody thinks state governors are thieves, but we have one of the most difficult jobs ever — Governor El-Rufai