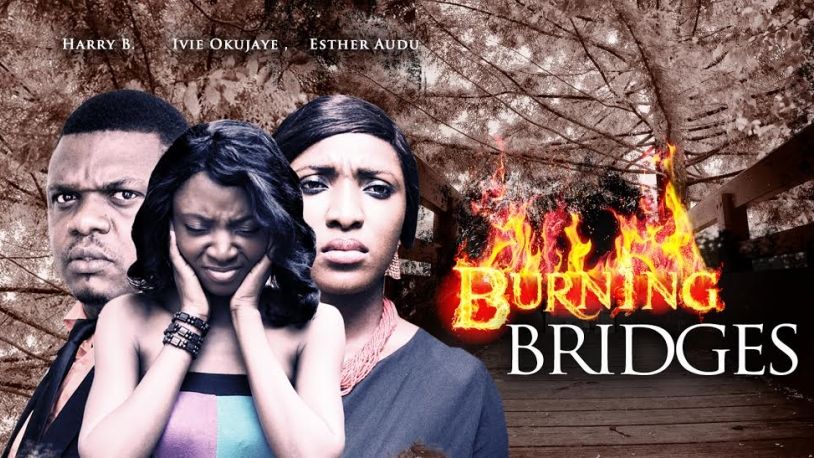 A while back, an Anonymous commenter (HERE) asked me to review ‘Burning Bridges’….

So this week, I saw a 2hours, 39minutes long Nigerian movie…it’s not that I haven’t seen longer movies (Rita Dominic’s The Meeting  was almost three hours long but it was fun)  however, this was one was sooooo long and to worsen matters, the movie didn’t even end well, they had write what happened to the characters at the end…after all the almost 3hours spent, really?! 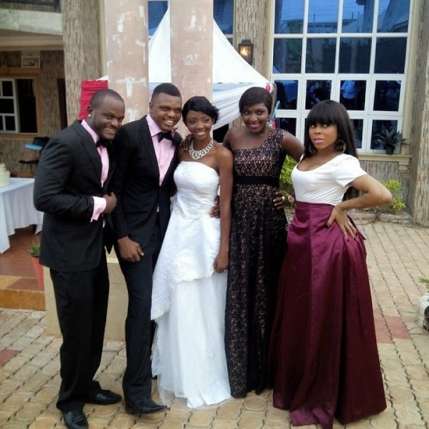 Rose and Louis (Ivie Okujaye & Ken
Erics) were in love and about to be married. He was a few years older
but after two months of meeting each other, he popped the question.

Directed by Okey Ozu, Burning
Bridges (2015) is a Nigerian film, though its central conflict is certainly
common across all cultures.
Rose (Ivie Okujaye) and Louis (Ken
Erics) have known each other for a short time, but in that short time they have
grown very fond of one another. They are in love and plan to marry. There’s
just one hiccup: Louis’s best friend is a woman, Terry (Esther Audu).
Is it really possible for Louis to
be so close to a female friend without becoming more than a friend?

Well, as the two looked forward to their
special day, Louis thought it was time Rose met his best friend, Terry
(Esther Audu). Rose had no issue with the fact that Terry was a woman
but problems transpired when it became apparent that Esther knew her man
better than she did.

READ
Microsoft fires 50 journalists, set to replace them with robots

As outside influences caused Rose to
question the friendship between Terry and Louis, it in turn drove a
wedge in her marriage. The relationship between Terry and Louis had been
strictly platonic until the night she allowed him to kiss her. Feelings
that were either subconscious or harbored instantly rose to the
surface. What Rose feared most came true and her marriage was left on
the chopping block.

As for this movie, the story execution
was poor. It had snail pacing and was painfully boring at times.

It
took an entire hour and thirty-five minutes for the story to shift as
the characters in the platonic relationship came to terms with their
true feelings…and it became so boring from then on!

Their forbidden kiss was what ignited the drama but by
then it was too late.

Some light-hearted scenes were inserted that made the movie even longer and Terry’s love life as the subplot was weak.

In terms of the story, Rose feared her
husband was sleeping with Terry yet she allowed Tanna, her floozy
looking friend, to move into the home and flaunt her assets. Hmm…The
“Tanna” character was unnecessary and one of Rose’s sisters could have
served her purpose in the story.

Some memorable lines were when Louis
told Rose “you made it difficult for me to keep loving you.” How lame.
If his heart was somewhere else then just say that. Also, he told Terry
that he didn’t think she could be the woman for him – something to that
effect. Dude, seriously? Terry was a beautiful woman that he had a rock
solid friendship with so what was the problem? What happens more often
than not is the fear of rejection.

No complaints about performances. The
characters in the love triangle were captivating to watch with Ivie
Okujaye as the standout. It’s the story that fizzled and required a
stronger plot and proficient editing.

“Burning Bridges” requires a lot of
patience to watch. Although its subject matter is one that could be
discussed ‘til the end of time, the movie didn’t present anything new or
worthwhile.

This is how the wives of the late Ooni of Ife will mourn for a year
Long distance marriage: Why my wife and i live separately – OC Ukeje
To Top