The day you genuinely gave your life to Christ, you began a race. It is a
spiritual race. The race to Heaven is not a sprint but a marathon. It is not
something you run with all your strength for just one day and it ends there.
Unlike the regular marathon that goes through streets and paths already marked
out, you may have to take unmarked routes and paths hitherto unknown while
running this race. Also, unlike in regular marathons where you can meet someone
who has successfully finished the race for tips, those who have run this
peculiar race to the end are definitely not around on earth for people to
consult with.

By the grace of God, as young as I am in Christ, I have been running this race
for more than forty years now, and I am yet to reach the finishing line. There
are people who joined this race some fifty or sixty years ago, and they are
still on it till now. Every race has its peculiar nature. If you need patience
and a lot of tact while running an earthly marathon, you will need much more of
these while running the heavenly race. No wonder
Hebrews 12:1 says,

“Wherefore seeing we also are compassed, about
with so great a cloud of witnesses, let us lay aside every weight, and the sin
which doth so easily beset us, and let us run with patience the race that is
set before us”

However, just like it happens in earthly marathons, there are several
casualties in the heavenly race. Some people start a marathon like a sprint.
They run far ahead of others, but after some time, they lose steam and begin to
retrogress while those they left behind overtaken them. Also, there are those
who fall and injure themselves, ending up in an ambulance. There are also those
who out of exhaustion are unable to continue the race, and so they drop out. There
are even those who after running for a while, gradually step out of the path,
and are disqualified. All these scenarios are applicable to the spiritual
marathon. Since you started the race to Heaven, have you been affected by any
of these? Have you stepped out of the path of the race? Have you run out of
steam? Have you fallen and refused to rise up? Get up today! The Lord will give
you strength. Persist some more. Take it one day at a time. Call on the Lord to
help you. Never give up. Each day that passes draws you closer to the finishing
line. You will make it in Jesus’ Name!

Memorise: But he that shall endure unto
the end, the same shall be saved. –
Mathew 24:13

It is Team Okocha Vs Team Carles Puyol today in Uyo

1 Wherefore seeing we also are compassed about with so great a cloud of witnesses,
let us lay aside every weight, and the sin which doth so easily beset us, and
let us run with patience the race that is set before us,

2 Looking unto Jesus the author and finisher of our faith; who for the joy that
was set before him endured the cross, despising the shame, and is set down at
the right hand of the throne of God.

3 For consider him that endured such contradiction of sinners against himself,
lest ye be wearied and faint in your minds.

Prayer Point: Father, grant me grace to run the race to Heaven with
wisdom, patience and perseverance.

Open Heavens Daily Devotional guide was written by Pastor E.A.
Adeboye, the General Overseer of the Redeemed Christian Church of God, one of
the largest evangelical church in the world and also the President of Christ
the Redeemer’s Ministries.

A rescue worker at Dadin Kowa revealed to AFP that: “So far we have recovered 12 dead bodies.”

An eyewitness at Dukku park, said: “I counted up to 30 dead bodies at the scene.”

Fwaje Atajiri, the police public relations officer in the
state also confirmed the attack, saying the police has cordoned off the area
to prevent hoodlums from taking advantage of the situation.

“It is true that there were bomb attacks in the motor park but the
casualty figure is not yet known,” he said. “The injured have been taken
to...

By Tireni Adebayo
A man named Imonitie Ilen-Otuma has been arrested by the police for allegedly raping a 27-year-old sickle cell woman in the Lekki area of Lagos.


A report said the man had earlier been arrested in May for raping a
colleague, and had been freed when the victim’s family agreed to
withdraw the case.

In the present case, the victim’s mother said the suspect threatened
to strangle her daughter and dump her corpse by the roadside, despite
her pleas to him that she was a virgin. She added that Precious was
still undergoing treatment in a hospital in the area due to the severity
of the injuries she sustained.

She said, “My daughter is a sickle cell sufferer. She met Imonitie in
the university. He was a year ahead of her. They started dating, but my
...

Hours ago Peter Okoye of PSquare took a stand against an issue that is
largelly overlooked in Nigeria – domestic violence. Sporting a white
t-shirt  that said “Stop domestic violence”. The pop star also added in
his caption

A house where a woman is unsafe is not a Home. Men
can be victims too. Women are not the only victims of Domestic violence
and Abuse. Men also suffer Domestic Abuse- especially verbal and
emotional Abuse – and may be even more ashamed to seek help… 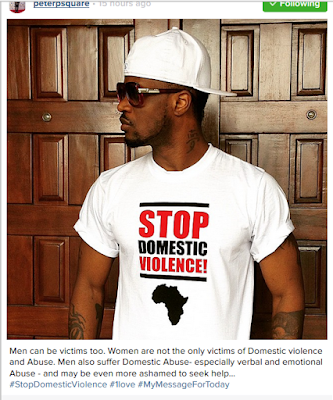 With Cool FM OAP Freeze claiming his wife of 13 years beat him & Nollywood actor Emeka Ike‘s
wife allegedly seeking a divorce on the...