UK based Yetunde Oduwole of the popular ‘Bustline’ fame has denied being the one that released the YouTube video that went viral yesterday and today. In that Video she cried and cried and cursed out Actor Baba Tee for making her cry.She has now gone on Facebook
to clear the air on how that video came about and even jokingly says
she deserves an award for crying.

Whoa!
Thanks to family, friends and fans of Bustline all over the world who
have been bombarding me with calls and messages about the “Crying Video”
Lol. I appreciate you all and at this point; I think you all deserve
some clarification. First
of all; do not be scared; I’ve not gone bunkers. Lol. I couldn’t have
gone on YouTube to post a video of myself in that kind of situation.
Moreso; I wouldn’t want you all to catch me without my wig; and with
such an ugly face  Now,
the video was sent to Tunde Bernard sometime in December/January when we
had a rift and I decided to pack it all up. Hey; I’m not gonna come up
here and say I don’t cry; I do cry; we all do in our closet. Not a big
deal. It was my means of communicating with him at the time because I
didn’t want to talk to him directly and wanted my words to sink in.
Well; he obviously kept the video safe with an evil thought that he
would one day use it against me and get me embarrassed. But the table
turned in my favour like magic! So far I got more heartfelt messages
from well meaning people the world over than the embarrassment it was
intended to cause. I guess his intention bounced in his face. To God be
the glory!!! January
to me is a long time ago. I have since moved on; and knowing me; I
would not sit in a corner for too long. I’ve got spring in my steps and
that makes me unusually unstoppable. Though my cry doesn’t last that
long; but believe me; it detoxicates me and makes me feel better. Yes
big girls cry too. Just like the rest of you. Please
this isn’t my current situation and I’m not crazy enough to post such a
video. But if there is any award to dole out to me; going by this video;
it’s the crier of the year award. Lol. That was some good one! People
close to me know me to shed tears for even the people I don’t know. I
shed tears even when watching depressing movies; despite the fact that i
know it’s make-believe, It’s the soft part of me that God has not given
me the grace to hide. If you
think you have tarnished my image by uploading and sharing a video that
was meant to be between you and I, and you are there mocking and leaving
nasty comments; I’ve got a message for you: God is watching and would
definitely pay each person with their own coin. I won’t wish you the
pain behind those tears; I’ll simply let God judge you. Simple. Bustline
is still your sassy and snazzy girl who could cry and who could stay
strong at the same time. By the way; I still looked pretty in the video
even amidst those tears….never mind my hair though; it was blooming at
the time����Maybe when next I cry; I’ll apply make up cos you never know where it would be uploaded….looolzzz. I thank
you all for your love and concern. You have all been awesome and
supportive. You are all family! And I’m sorry if I haven’t picked your
call. I couldn’t have picked them all. And to
Tunde Bernard who thinks uploading such a private video would depress
me, you are hella’ wrong you know! This babe is flyiiiiiing!! Most of all; though it’s painful to do; but I forgive you. I won’t let you or anyone come in the way of my prayers. Love you all fam….xx IT IS WELL

"My career is not dead" - Lil Kesh

Lagos socialite and
publisher of the defunct Hearts Magazine, Chief Goddy Anabor, is now a
Kabukabu driver! YES INTERNATIONAL!
Magazine gathered exclusively that the erstwhile billionaire whose name
and titles the likes of Sir Shina Peters, Oliver de Coque and so many
other musicians documented lavishly in some of their albums now engages
in the business to keep body and soul together, and after falling on bad
times.
Operating incognito, Anabor uses a Toyota Camry (tiny light) for this
and usually resumes his activities around 1am when fewer eyes will be on
him. His take off point is the popular Allen Avenue in Ikeja, Lagos.
Some of those who used to know him in his hay days are so sad and
shocked by the way he ended up. They blamed...

Have you heard of Nifemi Salako Photography?! 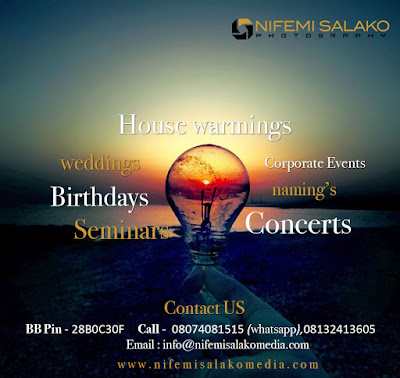 Mama Turned 70: See what a makeover artist did to make her look younger The Makeup artiste behind this amazing transformation is
Enitan Adjoa Ayo-Yusuf. According to her

''Working with mama on her 70th birthday was pure pleasure.
As soon as her brother saw her, he told me "you made my sister years
younger. I need to watch out. If all the young men are looking at her, na you
oh". She was so happy surrounded by her children.''

See another photo below 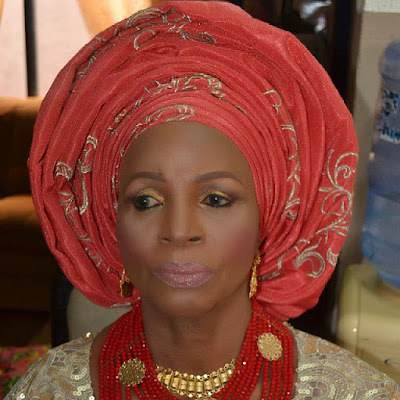