One teen in the Bahamas named Ashvonn Russell has taken the walking-into-prom game to an entirely new level.

Ashvonn,  who felt a limo wasn’t enough, showed up to her prom in Abaco Islands in the northern Bahamas in an ambulance.

And that was just the beginning. Giving
her arrival a ‘Sleeping Beauty’ theme, Ashvonn was wheeled out on a
stretcher in a satin and lace dress with her hair and make-up snatched.

Her eyes were closed and she laid there
as the ambulance lights flashed and her date, (Prince Charming) Johnny
Auguste, walked over to give her a kiss her on the cheek. Once he did, Ashvonn woke up and strutted her way into prom. Not surprisingly, news of
Ashvonn’s ambulance prom entrance hit social media, with Twitter user
@CaptainPajamas getting over 7,000 retweets after he posted a few shots. The pics got a range of reactions from “Lmfao” to “Brilliant,” “let’s do this,” and simply…”nah.”

Joy Nunieh speaks on how Wike rescued her, says "he's a man"

Some pointed out that the ambulance was being tied up for a dramatic
prom entrance when it could have been used to, you know, get people to
the hospital.

Others thought the move was in poor taste. Not minding all the backlash, Russell told BuzzFeed News “All of my paintings and drawings… are mostly inspired by fairy tales,” “Sleeping Beauty with a modern twist captured my interest for my prom entrance.”

“I can never apologize for being artistic and creative because that’s
what makes me who I am. To those that have creative minds like myself,
do not let the negativity stop you … always dare to be different.” she
said.

For sometime now there have been speculations that actress Lilian Esoro had called off her engagement to Ubi Franklin but it's like they are still engaged or may be not.

A  few minutes ago, she posted a photo on instagram and in that photo she had the engagement ring from Ubi Franklin on.
When her followers began congratulating  her and saying stuffs like "yay, you have started wearing your ring again', blah blah, she immediately took down the photo.
Sadly we were not fast enough to screen-grab the comments but we were fast enough to screen the photo and it's caption.
See the exclusive snapshot below:

Have you met D’Prince’s babymama yet? (photos)

When Mavin Records singer D’Prince announced the birth of his baby boy last weekend, many were taken by surprise. He smartly hid his babymama’s identity from the prying eyes of the media. Still, we dug out to work and now we have got details of his babymama.

Her name is Sharon Oparacho and she’s 26.

She is a graduate of Coventry University, UK.

She reportedly loves to party hard while her social media status reads “I am an alluring Taurus, lover of music and fashion.” 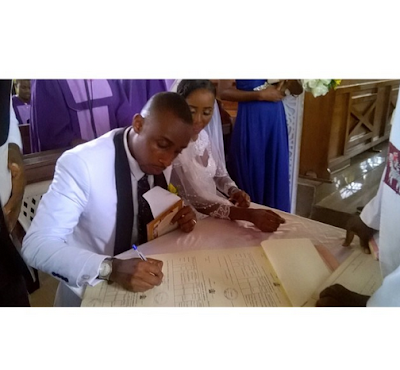 Last weekend, Tunde and Peju got married. We were all classmates at Olabisi Onabanjo University but the most amazing thing about these two is that all through our years in Uni, they never knew they would end up as a couple until 3yrs after.
Sometimes we bother ourselves over somethings we want, things we want God to do in a hurry..we become impatient, we seek God's face for a while and then we stop believing in him. The truth is God has a perfect time for all the things that concerns us...

If only we are just patient with him. Sometimes, the things we want are staring at us in the face but we don't pay attention...