Different reactions have trailed the discovery of warehouse where covid-19 palliatives were hidden by the Lagos State government....
Read more
Home News Let us analyze the Peter and Paul okoye ongoing drama for you...
Facebook
Twitter
Pinterest
WhatsApp 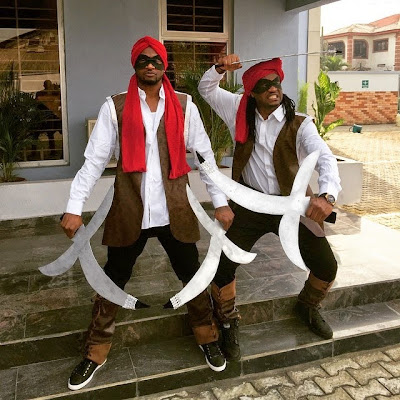 The Psquare twins have been giving off a lot of vibe about the possibility of all not being well with them.


While Peter appears to be building an empire, Paul is claiming bragging rights over the group’s success.

Peter, the active social media
super star who is happily married with two kids, is apparently moving on
without his twin brother, Paul.
He is currently building a multi-million naira beverage and bottling company in Lagos.

Bayo Adetu, P-Square’s Publicist, says the company, located on one
acre of land somewhere on the Island, will be producing bottle water and
assorted fruit juice and is expected to be launched before the end of
this year.

“Peter has invested so much into it, the company will launch this year” he confirmed.
Only last year, Peter was made an ambassador for Olympic Milk  without ‘Paul”.
When he was criticised by fans for the move, he simply said: “Music
is like football. For example, if I play for Barcelona and I get
endorsed by Nike, it doesn’t mean the whole Barcelona team has been
endorsed. This is about me and not me and Paul.”
“Among thousands or perhaps millions of people in
the entertainment industry, I felt honoured to be chosen as the brand
ambassador. The deal means a lot, not just to me but also to my fans. If
a brand isn’t worth it I have nothing to do with such a brand.” Peter stated when he got the deal.

He kicked off the record label
called P-Classic Record, a subsidiary of his company P-Classic Group in
November and unveiled his handsome cousin – Malcolm Obinna Clint
Onyeyiri, aka Malcoholic Obinna as the first artist signed to his
management.
All this he single-handedly accomplished!
Well, just in case you are wondering what’s up with the other twin, Paul- we’ve got you covered.
He has just taken to his Instagram
page to blow his trumpet and list out his accomplishment – he has
revealed that all the hit tracks ever released by them (Psquare) was
written, composed and produced by him.
He says he is the BRAIN behind the 40 best songs of Psquare.


DO ME
The internationally acclaimed Do Me….was dreaming one night and I woke up singing this song…then j.matins was at our place .., called him,woke my twin brother up and told them I think I have a HIT …and it was a dream come true


E NO Easy
E no easy by psquare….a wonderful song…produced by j.matinz ..written by me performed by psquare…,some say is a gospel music…but is a reality of what we do as psquare

Psquares all time biggest wedding song..written by me …produced by me
and performed by me…a very good example of an ever-green song..years
to years to come,this song will still be bumping and I know u all love it


FOREVER
One song I regretted we never did the video is Forever…..a love song,a
very good song….written by me, produced by me and performed by
me…is a special song especially for the ladies


BRING IT ON
Psquare ft Dave Scott ….this is a very good example of a good song,
produced by me,written by me and performed by me…we already shot the
video …..so watch out for it. #mybest40songsofp2

So, even though Peter seems to be
building his empire, Paul is the hero, because without the hit songs,
Peter may have no empire to build.