The body of Aishat Noble-Mustapha, the female Silverbird  staff that was gruesomely killed by unidentified assailant has finally been laid to rest yesterday in Lagos.
There were staff of Silverbird, students of University of Lagos, friends and family at the Atan Cementry, Yaba as the remains of the 26-year-old University of Lagos student was laid to rest around 2pm on Wednesday.
It had earlier been reported that the deceased who hails from the Etsako-West, Auchi, Edo State  met her untimely death after being stabbed many times sometimes last week at her Ogudu GRA residence shortly after she returned from work.
The guardian of the deceased, Mr. Abubakar Haruna while addressing Punch confirmed her burial saying, “Yes, we have buried her today. We did that in Lagos.”
The Police Public Relations Officer, Kenneth Nwosu, said although the victim had been buried, the case was not dead, adding that the police would give her family justice.
In his words,Nwosu said that, “The victim has been buried, yes; but investigations into the circumstances surrounding her death continue. The case is not dead. The police will get justice for her family.”
A 21-year-old suspect has since been  been arrested by policemen from the Ogudu Police Division as he was alleged to have been found in custody of the deceased’s blood-stained phone.
2019 elections: INEC releases new dates after postponement 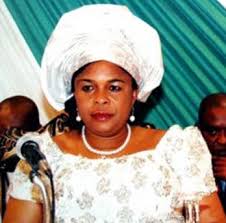 Patience Jonathan, the wife of President Goodluck
Jonathan has said that All Progressives Congress Presidential candidate, Maj.
Gen. Muhammadu Buhari (retd.) is planning to send her to jail if he is elected.
It appears that Mama Peace  is terrified of the walls of prison. In the
recent past, she said that the opposition wants her to take food to her husband
in the prison Here and this will not happen.
In what seems like a prayer session, according to
Punch, Patience Jonathan, at the Peoples Democratic Party rally in Ibadan, Oyo
State, on Wednesday,...
Click to Continue Reading
News

Vincent Okwekwu has been sentenced to death by
hanging by a High Court sitting in Akwukwu-Igbo, Delta State for robbing victims of a handset and N10,000 at gunpoint.
According to reports by Punch, Okwekwu was found
guilty of three counts bordering on conspiracy to commit armed robbery.
He was sentenced to death by hanging for the offence
of conspiracy, while he got 21-year-jail term for each of the other two counts.
The prosecution team from the Department of Public
Prosecutions had told the court that Okwekwu, on November 1, 2009, with two
others now at large, had broke into the apartments of their victims, Ofoyeju
Click to Continue Reading
News

One Suleiman Muritala has been killed by a gang, led by Muri Ogbena at Pampo village in the Afon area of Kwara State for failing to pay N50  village dues.
It was reported by Punch that the group of 20 thugs led by  Ogbena, the youth group chairman, armed with cutlasses and sticks, stormed Muritala’s house to collect the N50 village due. When the deceased refused and an altercation ensued the gang descended on him with weapons and killed him.
Click to Continue Reading