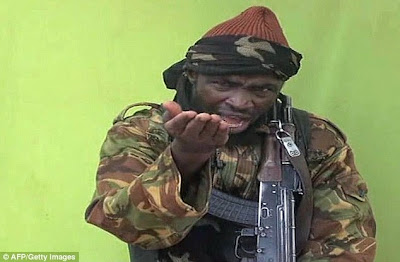 The man orchestrating the deadly Boko Haram massacres in Nigeria is a
boastful lunatic who revels in slaughter and chaos and is a ‘master of disguise’.Bloodthirsty Abubakar Shekau is one of the world’s most wanted men, with
American authorities putting a $7million bounty on his head.
Shekau – said to be to fluent in four languages – also operates under a
variety of different names which has only increased the mystery
surrounding his true identity.

The elusive Islamist fanatic has led his brutal Boko Haram militants
since 2009 into war in Africa, killing more than an estimated 16,225
people in that time. 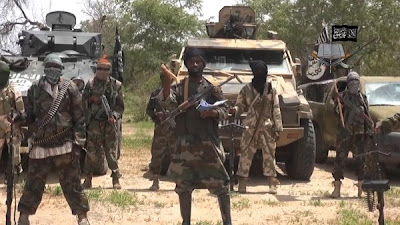 The four languages he speaks are listed as Arabic, Hausa, Fulani and
Kanuri. Even his age remains unknown, with predictions between 38 and 49
believed to be most accurate.
Shekau is believed to have a wife and three children, although their whereabouts also remain unknown.
The Nigerian military has claimed several times to have killed the
fanatic – only for him to appear in new videos proving he is still
alive.After one recent claim, he appeared in video to taunt the
military’s claims and laughed:

‘Here I am, alive. I will only die the day Allah takes my breath.’

Boko Haram – which means ‘Western education is forbidden’ in Arabic –
have shocked the world with their merciless slaughter of innocent men,
woman and children across the north of Nigeria.
Shekau claimed leadership of the terror group in 2010, and was seen last
week in a video praising the jihadists who murdered 17 people in the
Paris attacks.
He has been variously described as ‘fearless’, a ‘gangster’ and a ‘loner’, which security sources believe give him an air of invincibility which makes him extremely dangerous.
The Terrorism Research and Analysis Consortium has described Shekau as a
‘religious intellectual, yet also a gangster and vigilante as well as a
mad leader’.

“He was an easy-going fellow who would exchange banter with people in
the neighbourhood. He was popular… as a local theology student,” said
Grema Kawudima, from the Mafoni area of the city, in a September 2012
interview.Another local, Butari Gwoni said Shekau married the daughter
of a teacher, but his wife died in childbirth, triggering what some said
was latent mental illness. He began “exhibiting signs of mental
imbalance” after his wife’s death, said Gwoni.

Rumours also abound that Shekau escaped from the Federal
Neuropsychiatric Hospital in the Nigerian city of Maiduguri during the
1990s.
The fanatic regularly appears in videos to taunt the Nigerian military over their failings to prevent his group’s killings.
In one of Shekau’s first videos, believed to have appeared online in
2012, the insurgent leader boasted of his bloodlust and said:

‘I enjoy killing…the way I enjoy slaughtering chickens and rams.’

It is believed the terrorist was born in Shekau village that borders
Niger to poor farmer parents. They are then thought to have migrated
south into northeast Nigeria.
A religious young man, he studied basic Islamic theology, before
focusing on more hardline Sunni ideology and becoming a preacher.

After his religious studies, he is then understood to have attended
Borno State College of Legal and Islamic Studies for higher studies on
Islam.

"You are my number one business..." Timi Dakolo's wifey sends him a beautiful birthday s/o