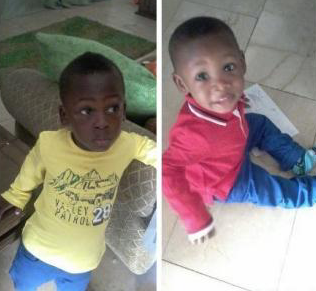 There is now an update to the viral story of the housemaid from ‘hell’ that kidnapped two lil’ brothers from their Magodo home – Gateway Crescent in the Magodo, Isheri area of Lagos State – on Sunday.

According to Punch newspaper, the housemaid, identified simply as
Juliet,fled home with the kids –Rafael (3), and 15-month-old Michael– who
are nephews of a Nollywood actress, Kate Henshaw, on Sunday evening
after their parents went out around 6pm.
The kids’ mother, Mrs. Onajite Esharegharan, and her husband, Elvis, had
decided to go for a shopping on the fateful day in celebration of the
latter’s birthday.
It was learnt that the couple had instructed Juliet, who hails from Osun State, to lull the kids to sleep before they left home.
Juliet, the children, their grandmother and her nurse ─ who also lives
in the house ─ were in the sitting room watching television, when the
generator went off. It was said that the elderly woman and the nurse
decided to retire to their respective rooms, while Juliet went upstairs
with the children.
It was when the couple came back home that the household discovered that the housemaid had sneaked out with the children.
It was gathered that Onajite secured the service of the fleeing housemaid last Tuesday through a sale portal, OLX, where a visitor, identified simply as Omolade, advertised .
Omolade had allegedly posted a number on
the website for those who were interested in a “humble” housemaid to
apply ─ an advertisement to which Onajite responded.   It was learnt
that Omolade eventually took Juliet to Onajite’s office.
Onajite said, “After we came back from
the church, the children looked tired and I told Juliet to take Michael
to bed while I went to do my hair. He had not slept when I came back.
That day (Sunday) was my husband’s birthday and we decided to have a
couple’s outing. We told her to take the children to bed immediately
because they were very tired.
“We got back home at 9pm. It was
Abigail, the nurse, that opened the door for us. When we entered,
everywhere was quiet and that was when my husband became suspicious
because usually, our children would have run from upstairs to say
welcome.
“She probably deceived the kids that she
was taking them to their mum. Her telephone line and that of Omolade
have been switched off since yesterday (Sunday). We lodged complaints at
the Isheri Police Station and the Department of State Service. The
police said it was beyond their capacity, but the DSS promised to track
the housemaid down.”
Elvis, a businessman, said, “We just
hope nothing is going to happen to them. We do not have any specific
suspicion as to where she took them to.”
Onajite’s aunt, Mrs. Tina Obajuwana, said she was amazed by the housemaid’s action despite her calm look.
“When she was introduced to me on
Saturday, I thought she would be a good woman. She looked gentle and
hardly could anyone think she is evil,” she said.
The Police Public Relations Officer, DSP
Kenneth Nwosu, confirmed the incident, adding that efforts were on to
rescue the victims.
He said, “There are efforts to rescue
the children and apprehend the fleeing maid. Members of the public are
encouraged to give information that will lead to the rescue of the kids
and reunite them with their parents.”
READ
Patronise locally-made products, Buhari says in message to Lagos Trade Fair
Tags
buying and selling of housemade via olx selling of maids on olx two boys kidnapped in lagos
Share
Facebook Twitter LinkedIn Tumblr Pinterest Reddit VKontakte Odnoklassniki Pocket Share via Email Print