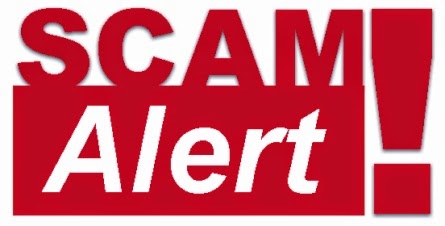 You can learn one or two things from these scam victim stories guys!
One of them was
scammed with the name of her church and church members.
Another was scammed via a fake bank alert. It reminds me of when I was duped last year by a fake Arik Air official, never planned to tell it but i just might do so now.
Read below:
The
twitter handle, Charity Arinze that narrated the story said “My friend has
just been scammed. She received a call from someone who said he knew her in
church and mentioned his name and other names of her prominent church members.

The guy now said he had relocated to Port Hacourt. and needed someone in Lagos
to get products from Bentex Olawale engineering Ikeja and deliver to 2 Chevron
drive first Gate Lekki. Details standard chrome, models spn no 1.8
Store Keepers name: Gabriel Alabi,
phone no: 07080712044 while his own  phone nos, Emmanuel 09030185535.


When she
called the Mr Gbariel on phone that Mr Emma sent her to help pick the
product and deliver, he told her to deposit some money before they could
dispatch the product to her for onward delivery.

Unfortunately she fell victim,
and they scammed her of 120k and the money was paid
into Access Bank. When she revisited
the bank that it was scam, they told her the money has been withdrawn on the
same day and the bank refused to give her details of the account.”

Also a screen shot has been circulating the web – this person claims a fake bank alert was sent to dupe their friend.

I had this 9-5pm job that I was doing then (2013) and sometimes
my work extended to receiving calls/making calls to clients (if need
be).

One Friday however, while carrying about my job description diligently,
a client who claimed to be ‘Patrick Okafor’ from Arik Airline, called
to make some enquiries and as usual I received the call calmly, curtly
and …as I could.

After attending to his enquiries, he thanked me and said he was very impressed with how I attended to him.

He
asked for what I studied in school, my grades, credentials…blah blah
and then he asked if I would like to work with Arik Air .

I
simply laughed over it but he was very persistent so I quickly googled
his name and I found that the supposed ‘Patrick Okafor’ was real, he’s
the GM for security/operations in Arik, in addition he had won two awards that year.

Abba Kyari was loyal to me for 42 years, he died at 67 - Buhari mourns

In
convincing me, he said “See dear, Arik is currently recruiting (not
cabin crew), customer/human resource/client officers and today is the last
day for the interview and I will really like you to be there, you have
really impressed me” and then he mentioned a mouth watering, jaw
breaking and bone weakening salary range!

I looked
through my schedule and asked if I could fly in on Monday for my
interview because I did not plan to leave Lagos that weekend but he said ‘Nah,
we have selected the employees and today is the final interview stage,
medical check-ups and screening will hold tomorrow (Saturday) I am going
to include your name cos I’m on the board and your training will begin
in Lagos on Monday”
It sounded so real, I suspected no foul play but I
told him ‘Thank you for the offer sir but I love my current job….and I
can’t fly out of Lagos today”

He said ‘Okay’ and asked if I had any friend who was as pleasant as I was or that I could vouch for.
“I’l be extending the opportunity to three of your friends, preferably a
male and two females but I’l really like you to come, I want you to work
with us @ Arik, you impressed me”.
So I told him I would get back to him.

Sharp
sharp I took to my BBM status and threw it open for my contacts, in
less than 3 seconds, I got over a 100 pings…anyway, I selected two of
them and asked them to call the dude which they did.
I began having
second thoughts and my conscience began scolding me “Kemi you don’t know
if this is God’s way of turning your life around for the best, lol” so I
sent him a text saying “I changed my mind, I’m interested.”

He
called back, he laughed (he has this chief-like voice by the way) and
asked why I said no at first…anyway, he said I needed to go and book a
flight at the airport and when we checked the fee was like 33k+ so I
said “I don’t have that amount to spend o” and he said ‘Don’t worry,
you’l be given a discount…you’l only pay N20, 110…I’l give you the
account to pay it into (Diamond Bank) so that you can have your ticket sorted out on
time…all you need to do is to show up at the airport with your teller
and passport…take your credentials, NYSC discharge certificate, birth cert, five
passports and CV along cos you’ld need these at
the interview”

And I asked ‘How do I return?”

“You need to be back in
Lagos Saturday noon or evening so you can get ready for your
training which starts Monday. Return flight is about 33k+ too but don’t
worry, I assure you that your name will be included in the staff pay
roll already so that’ld  be deducted from your salary”

I was happy ehn.

As
if I was under a spell, I ran to the bank to pay oh and likewise my two friends.
A few minutes later, he sent a
mail that I should quickly forward my CV to the mail addy, [email protected]/[email protected]
and that was when it clicked that it was a scam!
Their mail address should have ended with Arik Air eg [email protected], major and big  organisations always have a customised mail I.D.

My
heart sank. And then the friend called and said ‘kemi that dude’s
number is no more going through o, you sure he is not fake’

So I
called him, he picked the call  and  said ‘Yeah, I’m about going for a meeting,
my secretary has seen your CV, your flight ticket has been sorted out,
just go to the airport and wait at terminal two, someone will call you”

Right there a part of me said ‘Kemi this thing is fake’  while the other part said otherwise.

My friend continued, ‘kemi I beg, I’m not going to the airport o, it’s fake…you go ahead and tell me whatsup’

It dawned on us that we had been duped by I decided to see how the game would end….so I went to the airport waiting for him to give me the next direction and when he called he
said “Your flight is for 1830HRS, just hang around, one of the ticket
attendants will call you”
I waited till 1815HRS, sent him a text saying ‘it’s 6:15pm and
no one has called me.” He called, apologized and assured that someone
would..
I waited till 6:30pm and sent him another text, he didn’t
reply,and then the number stopped going through.
Went to the police station to lodge a complaint but filing the report alone was stressful. The female officer that attended to me was even discouraging, she was like “It’s just 20k nah, forget it. Do you know how much more you will lose by the time the police starts work on it. It will take months and you will still be charged for some money to make the work faster….”
Also tried the bank but same story, the money had been withdrawn and account closed.
#okbye!

OMG! Boy locks up father, stabs him in the eye for not buying him Christmas clothes

For refusing to buy his son a Christmas cloth, a Lagos based middle aged father, Anthony is now nursing an eye injury.

Leadership reports that the boy, a secondary school student, Ikeji,
threw caution to the wind on Thursday and stabbed his father in the
right eye for failing to buy him Christmas clothes.

Before then, he had locked up his dad for some minutes in their apartment on Arowojobe Street, Osodi.

Family members who witnessed the act said Anthony had explained to
Ikechi that he had only “small money” which barely paid for the
Christmas clothes of his three siblings,...

Aww, These Beautiful photos of Prince Harry with Lesotho and South African kids will melt you heart :)

He should have stopped in Nigeria too :).

Prince Henry of Wales, aka Prince Harry,  the younger son
of Charles, Prince of Wales, and Diana, Princess of Wales visited Lesotho, South Africa, recently for his Sentebale charity projects and his trip was documented.
See more below and be blown away:

Travelling with Prince Seeiso of
Lesotho, with whom he co-founded the charity in 2006, the prince visited
a number of Sentebale’s community partners, among them the Thuso Centre
for children with disabilities, where he took part in a cooking lesson.

There were several lovely moments documented during his visit like Prince Harry playing with a three-year-old orphan girl Karabo, learning sign language, his attempts at baking and cooking as well as moments when he had kids in smiles.

The Ogun State Police Command on Thursday paraded some suspected armed robbers arrested across the state, Punch reports.
Among them was 26-year-old Emmanuel
Olowu, who was arrested in the Redemption Camp of the Redeemed Christian
Church of God on the Lagos-Ibadan Expressway.
Olowu was arrested for allegedly robbing worshippers of their belongings in the camp during some of the church’s activities.
The state police spokesman, Muyiwa Adejobi, said the police recovered a toy gun, phones and money from him.
Click to Continue Reading

OMG! Boy locks up father, stabs him in the eye for not buying him Christmas clothes
Fans attack Paul Okoye for calling ‘Girl’ a fool on Instagram
To Top